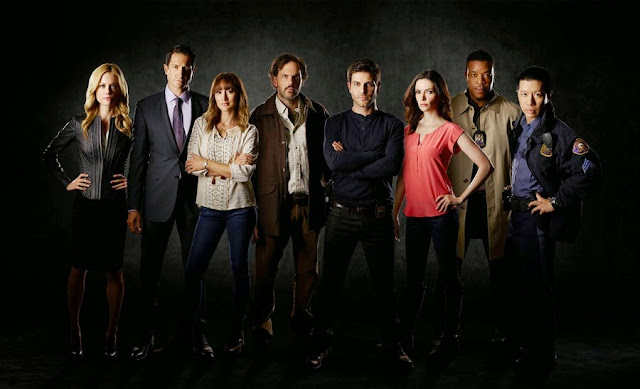 If you have been following Fangs for the Fantasy for some time, you will know that when a season finale comes around we often write a Friday Discussion about particular issues that have stood out to us over the course of a season.
So we come to the fourth season of Grimm and a terrible dilemma - there’s just so much wrong here that touching on any one issue wouldn’t give the full depth of a season that left us yelling “oh hell no” at the screen every episode.

It is the collective fail of this season that makes all of it so much worse. So let us line up some of the issues of this broken season.

Our first Oh Hell No has to be yelled at the top of our lungs for some of the most appropriative awfulness we’ve ever seen - and that includes  the season in which Grimm made Hitler into a Wesen.

This season, Mornoe and Rosalie are attacked by a group that disapproves of inter-wessen relationships (he’s a blutbad, she’s a fuchsbau). The whole storyline is directly ripped off from the racist bigoted violence against people in interracial relationships. We can’t say it’s “inspired by” or that it even “draws upon” this terrible bigotry and terrible time in history - this is a direct rip off.

The Wesenrein even put burning cross-like symbols in Monroe and Rosalie’s lawn. Burning crosses in their lawn, there was no other way they could convey hatred without stealing this terrible moment from history? And then they have a trial with lots of Wesenrein people in KKK-style robes - all they need is some bleach and it could be a historical photograph.

This is appropriation. This was a direct theft of a horrendous atrocity in history. This was claiming the experiences of a marginalised group and turning it into entertainment all while nearly completely removing actual POC from the plot line. I reiterate - Oh Hell No.

We need another Oh Hell No here - Grimm is not good with their POC actors, despite having two prominent characters of colour in the main cast, neither Hank nor Wu really get deeply absorbed in the plot. Like so many POC on so many shows, they’re often on screen - but as sidekicks, comic reliefs and shadows for the main characters. When we do  get plot lines that actually do involve POC on Grimm in a particularly meaty manner, it inevitably means Grimm is raiding cultures of colour for woo-woo. POC and POC issues or culture will never be raised for episode after episode - then suddenly Kali! Bring on the Hindu snake people. Chupacabra, dredge up latinos everywhere! Native Americans added a third such episode this season

These characters/cultures/people only appear when Grimm wants to fill its pockets with some non-European monsters and once the show has finished play with its new toys, they’re put back in the box to be neglected again.

Our next, Oh Hell No: Rape was a heavy theme in this season - and it was universally handled appallingly. Episode 16, Heartbreaker was particularly jaw-droppingly awful. Here we are introduced to a frog-wesen, the Folterseele. These wesen are all female (for some reason) who are cursed to be supernaturally attractive, meaning that just about any man around them feels compelled to rape them and then their skin poison kills their rapist. Of course, since there are no apparent male Folterseele, that seems to mean that this species only manages to reproduce through rape (and that the three generations of Folterseele we see on this episode came about through rape).

To save themselves from the terrible fate of being raped and then having their rapist
dropping dead at their feet, the women of this family brand their faces. Can we get an Oh Hell No on this?

The whole idea that being scarred will save you from rape is an extension of the idea that rape is something that only happens to beautiful women and, consequently, if a woman dresses down or otherwise reduces her attractiveness she will be safe from rape. Scarring their faces is just a more extreme version of “don’t wear short skirts” or “don’t wear make up” - it’s all an extension of the “she was asking for it” meme. It also completely skewers the idea that the rapes are supernaturally caused: the men are compelled by supernatural lust which just disappears when they see scarred skin? It doesn’t sound that overwhelming. Of course, it also suggests that a facial scar makes a woman completely untouchable on an extreme level that even shatters magical lust.

It also calls into severe question the underlying assumption of this episode - that the rapists couldn’t help it. That they couldn’t possibly accept a no and that, in the end, they are the victims. The raped Folterseele is the victimiser, their rapists are the helpless victims.

While this episode was overflowing with terrible rape messages, there’s another rape that permeates this season: Nick was raped by Adalind.

Absolutely no-one ever acknowledges this. Adalind used magic to disguise herself as Juliette and has sex with Nick while Nick thinks he’s sleeping with his fiancee. Nick did not consent to have sex with Adalind, Nick has been raped.

This is a terrible, abusive, cruel, dehumanising act that must be absolutely terrible for… Juliette. Wait? What?

Yes, Juliette is the victim of Nick’s rape because it is continually presented as Nick cheating on Juliette. She is the one victimised by Nick and that hussy, Nick is the one who has to apologise for being raped and violated and has to make up with her. She even refers to it as cheating when Nick has to have sex with Juliette while she’s disguised as Adalind. Here’s Nick compelled by circumstance to have sex with his long term enemy, the woman who raped him and he has every reason to be really hurt by this - but no, he’s cheating and it’s poor Juliette who is making the epic sacrifice here. Again, Nick is never presented as the victim in his own rape - worse, he is the victimiser, he hurt Juliette - it’s his fault.

This is the underlying theme throughout Julliette’s Hexenbiest storyline - she’s the victim and it’s all Nick’s fault. And while we can understand that she wouldn’t have been part of the supernatural world without Nick, this particular trainwreck was caused by Nick’s rape.

To crown this terrible depiction, we have the slut shaming of Adalind. Not attacking her for being a rapist, but wall to wall shaming of her for having sex. She isn’t treated as a rapist, she is treated like “the other woman”. She isn’t a rapist, she’s a homewrecker. To further frame this, we see Nick comforting and being all solicitous of his pregnant rapist - and her pregnancy is not even remotely addressed as a painful and difficult and complicated issue Nick would have to try and come to terms with - no, it’s just another example how terribad Nick and the slutwhoejezebel Adalind are victimising poor, abused Juliette.

Another Hell No moment, we have Episode 15, Double Date where we have a Wesen which is a pretty clear trans analogy. Before anything else, we have to remember that despite being four seasons old and with 80 kajillion characters there are no LGBT characters of any kind in this series. This is the first thing that comes close.

And it’s terrible. The trans-analogy criminal switches between genders (and personalities) and, ultimately, to punish this character they lock them into one gender forcing them into one gender presentation. Media cannot be separated from real life and topics it draws upon - and it’s impossible to separate this penalty from the real life oppression of trans and genderqueer characters who are continually and often brutally and violently to conform to a particular gender role often grossly at odds with who they are. Trans people die because of this, they are killed and they are driven to take their own lives by this very oppression.

And it is not remotely narratively necessary to control this fraudster, they couldn’t arrest them as one half of a fraud couple? They couldn’t appeal to the Wesen council? They couldn’t have fought them and had them die/flee from battle rather than have a specifically trans-targeted punishment? This is the choice that the writers deliberately made - they were not forced by the circumstances of the episode.

We’ve always been clear that we are amazing, huge fans of Kelly Burkhardt. So it is tempting to give an Oh Hell No to her death in any circumstances. But, to be fair, an epic death scene for Kelly would have been appropriate in this storyline. She has been tricked and lured into a trap and, alas, after a heroic and incredible battle she was finally brought down, I would have sadly accepted it. A long fight scene where Kelly puts several enemies on the floor, where the house is destroyed by her ferocious defence, where only weight of numbers finally pulls down this epic, experienced and lethal Grimm after an awe inspiring battle that reminds us why she is so very dangerous - that I would have celebrated. I would have been sad, but it would have been a fitting end to this lethal warrior woman and at least been a respectful way to push her into the fridge

Instead she died off screen. We didn’t see her fight. There’s no evidence of a struggle. She’s brought back, has 10 seconds of screen time and then killed so we can get on with Nick’s pain. There’s no pretence to say this is anything but a fridge.

Now to the biggest event in this season of Grimm - Juliette. Her descent into monsterdom and her eventual skewering by several crossbow bolts. And us cheering.

Which is part of the problem - I don’t think we’re alone in celebrating Juliette’s death after her sterling efforts to make us loathe her every time she appeared in the last few episodes - the writers worked tirelessly to make us hate Juliette and it’s immensely frustrating.

Juliette’s arc over the whole series has been a problem. For most of the show she has been helpless, kept ignorant and frequently victimised. She has been kidnapped by dragon-wesen. She has been scratched by a sleeping-beauty spell. She has been afflicted with amnesia and terrifying hallucinations. Juliette has always been a victim and powerless for most of her appearance - it began to improve when she learned the big secret but Juliette only began to show real power and agency when she started to become a Hexenbiest.

This could have been an excellent moment of Juliette embracing her powers - but instead she alternated between being the primary victim of Nick’s rape - and being evil. Specifically being evil and directly punishing Nick (punishing him for… being raped). It is a terrible trope that a powerful woman is an evil woman - while a helpless damsel is a good weapon. Juliette epitomises this trope.

Season four is now over… and, frankly, we’re pretty happy to see it go. Grimm has been renewed however, and a lot will have to change if we’re not going to have another season of Oh Hell No


Most particularly Nick and Adalind most certainly must not have a relationship. Oh Hell No.
Posted by Sparky at 9:00 AM