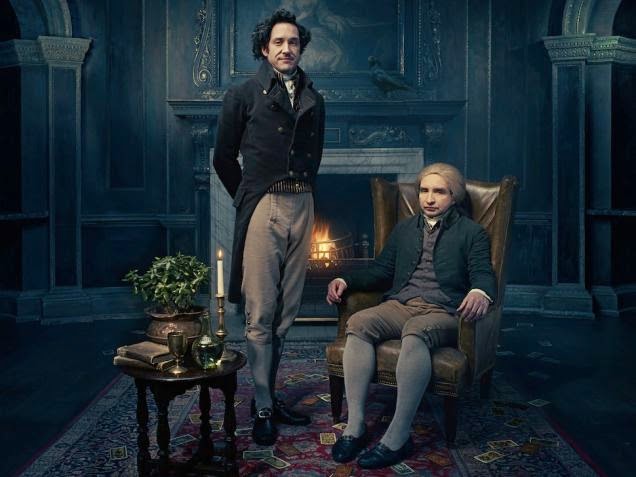 We have a wonderfully atmospheric opening as a man tries to enact a spell in his excellent study/laboratory – but it doesn’t work. And seems to be just one of many many failed attempts.

He leaves his house and hurries to an inn with many obviously wealthy gentleman while the voice over tells us about this society of English magicians that meets in York. And that, as gentleman, they’d never harmed anyone by magic nor done anyone the slightest good. Nor, for that matter, had any of them actually managed any real magic. Of course, that doesn’t stop them having a reputation of being the wisest and most magical men in Yorkshire.

And eating big, expensive meals it seems. The first speech comes from a Mr. Segundus, our failed magician who asks the salient question – why isn’t magic still around? This is, apparently, a terrible question to ask – they study magic. That doesn’t mean actually DOING any, oh indeed, no. It’s definitely not a thing gentlemen should ever do – and they mock him fiercely for doing so.

The next day though a Mr. Honeyfoot catches up with him to agree with his point as Segundus frustrated, goes from book shop to book shop looking for books of magic, not just about magic (which is why he came to the Society at all, for the few pages it possesses). Even more frustrated because every time he reserves a book someone manages to get to the shop and buy it anyway – a man by the name of Norrell.

As they travel to see Norrell, Segundus tells a story of the man who gave him the spell page he has (which doesn’t work) who told him that magic would be restored to England by two magicians. Sounds far fetched? Well Segundus paid a large sum of money to a person he met on the street for a dirty page, so we can say he is… charmingly naïve. But the man did insist that Segundus was not one of those two

The call on Mr. Norrell in his awesomely “convoluted” home with an incredible library and brilliant atmosphere who greets them by critiquing some of Segundus’s academic work while Segundus is awed by all the books. Mr Norrell is happy to let them browse (after consulting with a man I took to be his butler) like giddy schoolboys among all the books they’d only ever heard of with Norrell scathingly criticising each one.

They do hope to answer their question – why magic just disappeared 300 years ago – in the amazing library. Norrell disagrees- magic isn’t over, he himself is a (gasp) PRACTICAL Magician. And has his servant show them out

Segundus and Honeyfoot are unwise enough to bring this up at the next society meeting – only to be mocked and ridiculed. They insist that Norrell must prove himself. Challenge issued!

To the Minster in the dead of night. Norrell’s servant presents Norrell’s written word that if he fails to demonstrate his power he will retract his claim and never make a similar claim again. He would be publicly shaming himself and admitting to be a liar – aie the horror! Even the head of the society thinks it’s going a bit far – especially when he also demands the same promise from them. Despite his initial reluctance, the prideful head of the society is happy to sign to show he doesn’t believe him – while Honeycut agrees to sign because he wants Norrell to succeed and use his power to help England win the Napoleonic wars.

Segundus is the only one who will not sign because any chance of him not being involved in magic in the future is just too much.

From his study, Norril casts his spell – bringing the statues of the Minster to life in a pretty awesome, but tiring display. In the aftermath, Morril’s servant (Strange, maybe?) says it’s time for Norril to stop hiding and they go to London

To London, with Norrill’s disapproval and his servant stoic disapproval of the same (I do wonder who is the Master at times) where he has caused a stir in the press, but scepticism is still high. Norrill is also pretty pissy about conjurers who give them all a bad name but his servant (or boss) pushes him to get his act together to impress the Secretary of State for War.

At least parliament is entertainingly witty. Norrill gets his invite back to Sir Walter (the secretary of war’s) home and his very doubting mother/sister/random woman and very sick but encouraging fiancée. Again Norrill faces a level of respect for theoretical magicians and a whole lot of doubt over his claim of being a practical one. Ultimately, magic is not respectable enough for Sir Walter be involved in.

Norrill may be defeated but his servant isn’t – and drags him to a party; after all, powerful men spend far more time at parties than in Parliament. Not a bad plan if Norrill weren’t so socially inept and quickly tries to avoid the crowds (fully of dubious rumours about him) and he flees rather than be called upon to actually demonstrate his powers. In doing so he runs into the mysterious street magician who seems to be linked to everything (and isn’t impressed with Norrill’s hoarding of magical knowledge) he rambles about prophecy and raven kings and a special book he has. While Norrill mocks him for believing in prophecy, the Street Magician quotes one about two magicians which ominously includes the Raven King returning

Norrill goes home, demands his servant take the Street Magician’s book, drive him out of London (giving him spells to use to do so) and then they both return to Yorkshire. He refuses to perform for the people despite his servant’s criticism of just how bad Norrill is in society

The servant confronts the street magician, Vinculus, and in a game of duelling tarot it seems the Street Magician is not powerless – changing all his cards to the Raven King which is creepy and impressive.

Meanwhile the socialites come to Norril to try and convince him to perform and gain influence but he’s too proud. Until he hears that Sir George’s fiancée is dead from her ailment – and with her a copious income that Sir George was relying on for his political campaigns (no-one even pretends this is about love). Norrill is now intrigued by a necromantic solution. Despite his misgivings, he is easily talked into it.

Alone (much to his fanclub’s annoyance) he summons… someone. Death? A fae? Someone very creepy at least. After much creepiness, Norrill refuses to spread the creature’s name or use his services (more talking of the second wizard) – the deal is struck: half of the lady’s life in exchange for resurrection (which they settle on 35 years). The creature leaves, taking “something of hers” to mark his claim.

She is resurrected, much to everyone’s shock. Emma lives again, missing only one finger which she doesn’t find very disturbing.

That proves his power, certainly.

Cut to wizard number two – Jonathan Strange trying to convince a lady, Arabella, he is a much reformed character, drinking only a bottle a day (of what is carefully left unspecified. This is Regency England after all). But, ultimately, she questions the fact her lives his whole life as a holiday with no occupation or purpose. And she’s going away to help a priest called Henry (her brother) – Jonathon springs into action (to propose) and she tells him not to act – but to actually think

So Jonathan goes to complain to his daddy that he’s not able to do anything useful and daddy responds by mocking him for being weak, throwing in insults against his mother at the same time (he could have just told his whiny offspring that no-one’s stopping him doing anything useful). In case we’re in any doubt that daddy is not a nice man, he’s quite indifferent to his ill servant actually collapsing in the hall unlike his kindly son. He won’t help his son get a job, but I assume he is still going to give the guy money. Poor little rich boy

Jonathan goes to mope with Henry, reflecting that he was going to ask his permission for Arabella’s hand but decided to go for hers instead as it’s rather more important (yes, I like that) between moping about his failed business ventures and cruel father

So it’s not particularly sad when said father drops dead, seemingly freezing himself half to death in an attempt to torment a sick servant. Nice man. Jonathan is rather unseemingly gleeful about having a job now (an estate to run) and wastes no time brainstorming how to propose to Arabella with his sick servant Jeremy.

Now it’s Jonathan’s turn to have Vinculus appear and sells Jonathan Norrill’s spells. He shows these spells off to Henry and Arabella because, in his rather feckless and random way, he’s decided to become a magician. To everyone’s surprise, he makes a spell to see his enemy work.

I actually thought this show would take place in York – it’s a shame it doesn’t, some settings in a British city beyond London would be interesting. Yes, there are urban settings in the UK that don’t include London, though I don’t think the south-east is convinced of the fact.

This episode was an hour long. It felt much much much longer. That’s a bad sign

I mean, it’s an intriguing concept – where, for all his magic, it is respectability that is the primary obstacle in Norrill’s life –power alone is nothing next to politics. And the world is interesting – a world where most people believe magic DID exist and even revere its scholars, but look down on the actual practice and are very dubious about the whole thing. A profession for theoretical academics, respectable gentleman not people actually doing it

I generally wait on considering more elements (though the pilot alone is very lacking in meaningful diversity) until a few episodes in, but I can’t get past that the pilot was long and, sadly, kind of dull. But it has potential, it definitely has potential