Fifth Grave Past the Light (Charley Davidson #5) by Darynda Jones 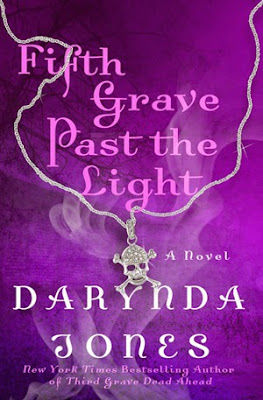 Charley's life as a PI, Grim Reaper and who knows what else becomes a little more complicated when sexy-bad-boy-love interest Reyes moves in next door making it that much harder to avoid him. And she’d like to do so since he may be the main suspect in an arson case that her uncle is pushing her to solve – and doesn’t believe she doesn’t know anything about.

Of course, it’s not the most pressing case to her, not when dozens of traumatised ghosts start populating her apartment making it difficult to move around. It’s impossible that this many dead women haven’t been noticed and she’s determined to find the truth – especially as the threat gets much closer to home.

This book had a nice, strong main plot that deeply involved Charley, her powers and gave her plenty of motivation to get into the thick of it. It was twisty, involved with lots of red herrings and false leads and interesting insight and Charley being her usual random self that it really worked.

It also managed to hit a balance I’ve seen before in this series but rarely elsewhere – both deeply and terribly tragic and painful in places yet also surprisingly light and funny. It works, it shouldn’t, but it does. Charley is a deeply silly often nonsensical and outright fun character breezing through life – but it’s a life that is inherently full of death and pain and tragedy. But that is her normal. So she can feel sad and empathetic for the dead while still being really annoyed that the ghosts are cluttering her apartment. She can sympathise over the brutal death of a serial killer victim while still managing to crack jokes, avoid therapy and drive Garrett up the wall.

It shouldn’t work as a balance – but it does. As does this really good murder mystery which manages to combine investigation with woo woo in a really good way. I also like how she works with law enforcement and not just her relatives. Charlie solves crime. She does it well. Almost too well. And that means she is actually liked by a lot of police who regard her as a valuable resource – I like that. I also like that it’s clear both they and her excellent friend Cookie also have skills so it’s not just a one Charlie resource

Which means I also like the growing metaplot of the police captain who would really like to know how Charlie does what she does.

I love the snark of this book. I love the banter of this book. I love the fun of this book. But… like the last book I find myself telling myself these things with juuuuust an edge of not quite believing it. It’s still immensely fun and the way that Charlie bounces off Cookie is just amazing and I love the pair of them utterly. But it’s just getting a little too forced, a little too convoluted and pushed a little too far. Again, much as I mentioned before, she will force jokes which used to be just a hilarious zany part of this amazingly good fun character and then she will take them far too far. Danger and Will Robinson, her breasts, were funny. Naming every other body part rapidly becomes old. Misery, her car, was amusing. Naming ever appliance and stick of furniture is not.

Let me be clear that it is STILL immensely amusing, still utterly hilarious and still made me laugh out loud on several occasions. There are few books that can make me do this and this series is always guaranteed to get a few chuckles. It’s contrived in places but in others it is just perfect.

Another thing that hasn’t changed is my loathing for Reyes. On the plus side, he didn’t add to his eternal death threats and abuse of Charley which made this book far more tolerable for me. Unfortunately, there still remains no real come back for the many terrible things he’s done in the past (and, yes he does save her life on a semi-regular business, but that doesn’t then give him ownership or the right to treat her the way he does). Their relationship moves closer which I’m in tow minds about – one the one hand I still think she should move away from him and never look back, on the other if they actually become a couple then maybe, just maybe, he will top keeping secrets and threatening her life. I live in very vain hope. I really do not understand why this man is a fan favourite

His one attempt to address his behaviour is classic Urban Fantasy love interest angst about why she could possibly love someone like him. Still he was more tolerable in this book than in previous ones. I also liked how when he tried to play the jealous lover card she basically took it and ran with it for lots of mockable fun.

There is another plot line with her trying to keep him at a distance (and failing) involving him and his sister and some arsons – but given the motives behind it I really liked it. I liked how it played out, I liked how Charley didn’t get everything to plan out how she wishes because there were other things that were more important to everyone. I also liked that Charley did attempt an ultimatum – she will not enter a relationship with Reyes until he stops threatening her. She won’t be close to him if he keeps relying on intimidation
The continuing mystical Charley-has-special-woo-woo plot is developing… but slowly. And I think I prefer it this way because the rest of the plot is strong  and she herself needs to grow more as a character before she gets such uber powers that are being hinted at. I quite like the progression. There’s some big huge ominous revelations from Garrett which kept us moving without rushing – lots more information as we inch closer to what this all means and why Charlie is so special.

This series has a number of excellent female characters – Charley and Cookie can only ever be praised, but there’s also Charley’s excellent sister as well with her own skills and Charley wrangling abilities and fun. There’s also an excellent scene that turns the whole concept of a man cheating on his wife because she’s not attractive any more on his head and pokes some big sticks at beauty standards

There’s also another disturbing scene of victimisation which seems to be becoming all too common in this series. Among all the lightness were getting these terrible scenes where Charlie endures something horrendous and appalling. And it’s depicted well, it’s stark and not downplayed in the slightest – but I do wonder if it is necessary and if this abuse-as-a-plot-point is going to be continually used in the series

There’s also an utterly awful sex scene in this book between Charley and Reyes and I have no idea what it is – from her describing him as trying to “punish her” and saying the sex was about “reprisal” and “revenge” (while saying he definitely wasn’t hurting her and she was enjoying it) to her bringing up how he was raped by his step-father in the middle of things along with her pity for him…  it’s just a toxic mess of everyone-needs-therpy-clothes-on-now wrongness.

There are some POC in this series – we have Garrett who continues to be a not insignificant character with a fairly meaty role to play, albeit I’m not sure if I’d put him up there as one of the more involved characters. There’s also Reyes, the love interest I continue to hate, who is Latino, along with his sister both of which are pretty heavily involved in this book. There’s also Angel,  Charley’s ghostly assistant and a brief appearance from his mother which promises to be an ongoing plot line.

There’s a Deaf character with some wonderful interactions with him, including some poking at clumsy sign language and the utter wrongness of saying something about/around a Deaf person believing they cannot understand you. It’s really nicely done.

Alas, there are no LGBT characters in this book, not even the minor appearing bisexual in the last book. There are a couple of gay jokes though – which is unnecessary, there’s more than enough humour here without going there.

There are elements of this book and this series that are certainly not done perfectly – but overall it remains so immensely fun that I have to fight not to forgive all. It’s a series that brings me joy. It’s a series that makes me smile every time I pick up the next book. It may not quite always reach the standards the earlier books established, but it’s never not a fun read.