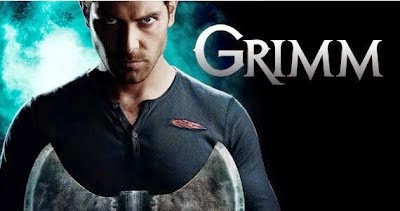 We join the gang where we left off with everyone all upset and worried about the burning Wesen symbol in Rosalie and Monroe’s garden. Just in case we missed the gross appropriation, Hank helpfully points out that it’s just like a burning cross. Y’know, in case you thought Grimm  was being too subtle about it or anything.

In between Rosalie and Monroe being upset and angry (Rosalie upset, Monroe angry because GENDER) they exposition about pure-Wesen groups that exist that are technically illegal but who may have sympathetic members of the Wesen council, basically saying they can’t guarantee the authorities to intervene. And they can hardly rely on the human authorities and Nick can’t really do anything because he’s no longer a Grimm.

The attack does give Nick and Juliette the final impetus to re-Grimming Nick.

To Nick and Juliette’s house where the whole gang gathers so the upcoming awkward sexing can have even more awkward than we imagined! Elizabeth (Renard’s mother) arrives to cast the spell and Juliette turns into Adalind. Everyone files out in super awkwardness to leave Nick and Adalind/Juliette to get it on. It starts every bit as awkward as you’d expect before Juliette throws caution to the wind (after all, she doesn’t have to have sex with someone who looks like a sworn enemy) and they get down to business. They also get one of those L-sheets you get in Hollywood – y’know long enough on one side to cover a woman’s breasts while still showing the man’s chest?

Nick proves himself to be wiser than the average man when he decides not to answer Juliette’s question “how was it?” because there is no good answer there. For a tense moment, Juliette has some intense, debilitating stabbing stomach pains and it looks like everything is going wrong – but when Nick gets her to the bed she turns back to Juliette and seems to recover. I doubt that’s the last we’ve heard of it.

Meanwhile, Elizabeth has coffee with her son, Renard, to make her goodbyes because she intends to leave soon (which will be a shame because she’s kind of awesome). First she expositions about the hat Adalind had which is apparently super powerful, super special, super old and super rare – she leaves it with Renard so everyone remember he has the magic hat. She also intends to go hunt down Kelly to see her granddaughter which means my dream of a Kelly & Elizabeth spin off could still happen (I can dream).

Truble stays at Rosalie and Monroe’s both of whom hit the beer to avoid the whole incredible awkwardness of having to imagine your best friends having sex because wrong wrong wrong. They go back to Nick’s house the next day, checking to see if the coast is clear (which is cute and awkward). Alas, Nick still can’t see Monroe’s woge – but Elizabeth did say that it would take some time to kick in.

Wesen of the week time! A young couple are driving down a country road at night when they’re driven off the road by two snake-wesen using a spike trap (the couple kissing and driving certainly can’t have helped). The couple are helpless and dazed in the car when the snakes-wesen approach and strangle the man with their tongue and kidnap him. They can’t take her because she’s pinned by the crash – though they could have tried. Lazy snakes! Lazy! Especially lazy since now they have to kidnap someone else.

Wu (who really needs to be let in on the big secret) calls in Hank and Nick where they are introduced to Deputy Sherriff Harris (I assume she’s relevant because she has a name so keep an eye on her). She reminds Nick of a case 6 years ago where another couple was driven off the road with the same spike trap and kidnapped – Nick dredges through his memory and files to remember a survivor talking about “monsters” and they find a creepy little metal snake doll in the old evidence. Going back to the crime scene with metal detectors, they find a second doll – and when Harris shows up with information about another previous case that fits the pattern, they find a third. During all this we’re getting hints of Nick’s Grimmy powers returning

Time to hit the books! Hank and Nick do some reading and find an account of a tongue-throttling Phansigar, a kind of skalengeck (a snake wesen). They were part of the Thugee cult apparently and performed their own human sacrifices involving choking young couples unconscious then burying them alive every 3 years as a sacrifice to Kali. The Grimm who wrote this was Rudyard Kipling.

Nick and hank present their findings to Renard and Wu arrives with information on the little metal dolls – finding the address of the junk yard the metal came from. We cut to there to see the two Phansigar dropping the kidnapped man into a pit.

Meanwhile, Chavez’s people are following Truble. Truble objects to this and not only boldy confronts the guy – but stabs his tyres right in front of him. Truble is not amused by these shenanigans. She then sneaks back into Nick’s house while the follower argues with his fellow minions. She’s joined by Josh (human son of a Grimm who is being chased by Wesen) who is so very out of his depth. And Truble is the one who has to tell him Nick is no longer Grimmy.

Nick needs help and calls on Monroe – who doesn’t want to leave Rosalie alone given the hate attacks. So Juliette arrives (with a gun) and Truble – couldn’t he have just taken Truble? It seems rather less disruptive.

While they’re picking up Monroe, Harris goes to the scrap yard and, after calling Nick and Hank, is throttled by a Phansigar (one of the two young men at the place, their elder and boss of the place is not amused by the throttling of police on the business premises)

It must be a really long ride because it’s full dark and the Phansigar are in the middle of a full ritual by the time the gang finally arrive. They go in and Nick starts getting a blinding headache, but his grimy hearing picks up Harris being thrown into the hole. This is so useful because the giant flaming statue with three chanting guys is totally subtle. And they better have a tractor or they’re going to be filling those holes all night. Unfortunately Nick has another headache, becoming Grimm again is like drinking a bottle of tequila the night before, and the cultists run.

Hank and Monroe helpfully jump down the pits to help the captive people but don’t have any way to get out so the cultists come back. With the sidkicks duly incapacitated, Nick gets to re-Grimm all by himself and have a dramatic 3 vs 1 fight scene.

Back to the police station where they tell Renard about Nick’s Grimmyness, then back to tell Juliette and Truble who then tells him about Josh.

Over to Austria, Adalind joins Viktor (who is discussing Meisner – that’s the member of the Resistance who helped free Adalind and had a thing for her.) She’s free from her prison though still very suspicious. She tells Viktor about Kelly (Mummy Grimm, Nick’s mother and paragon of awesomeness) and after putting lots of memories and pieces together they realise that she has the baby.

We have spoken so much about appropriation of real issues on  the genre, when actual real life atrocities and bigotries are taken and repurposed for the sake of woo-woo with little respect given to the communities who were appropriated from. Now I don’t have to explain this to a lot of people, I just have to point to Grimm and say “look, a Black man telling them their made up symbol is a burning cross” and lo, it is done.

I am glad they got actual Indian actors (or South Asian descent anyway) to play the Pansigar – rather than just ripped off the idea of the Thugee and a Kali cult and used white actors – but at the same time they are blatantly dropped in their just as an excuse/gateway to grabbing this idea. And the idea itself is not exactly solid, given the conflicting narratives of the thugee.

I am glad to see Nick returned to his grimmyness and it has, on the whole, been an interesting storyline full of lost opportunities. We’ve spoken a lot about the sheer train wreck that is denial of Nick’s rape (and, in fact, Juliette being cast as the victim more than him – and even he being implied to be at fault). They showed Nick having more difficulty than Juliette with the whole scene which is some relief but it was still a hot mess without any real acknowledgement that he was the one victimised by all this. Then there’s Nick’s friendship with Monroe and helping Truble. Monroe and Rosalie having trouble before and Nick not knowing about it kind of emphasises how much their friendship tends to go one way – and with Nick losing his Grimmyness he lost his potential to help (not that he did a lot before). Similarly, Truble has become something of a Grimm tool to Nick and Hank – sure she’s grown a lot in that time – but she was becoming a weapon in their arsenal while Nick was out of action.