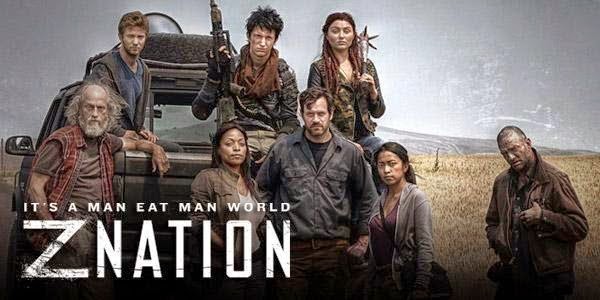 The group, now minus Mack and Addy, drives on through Colorado and Murphy, a little revoltingly and certainly grossly, pulls off a chunk of his own skin. They’re forced off road onto a golf course by a road block and, after a brief check in with Citizen Z, they run into some zombies just as they run out of ammo.

They run to the clubhouse chased by zombies and get separated from Murphy (they’re past worrying about Murphy now, his zombie immunity is well known). They’re trapped in a cupboard with a hoard of zombies outside until they hear gunfire – and all the zombies go quiet. They’ve been rescued by 3 people

Outside, Murphy is playing golf, completely ignored by the zombies. Introductions – new people are Fred, Henry and Janice. They’re understandably intrigued and wary of Murphy’s zombie taming abilities as they all have BBQ and booze. Murphy has reached a point where he’s willing to boast about surviving the zombie bites and the vaccine and their whole mission to California. Fred offers their help getting them all to California.

At which point everyone starts getting all drowsy – possibly from the booze but since this hits Warren as well, I’m going to go for drugs. The gang all collapses, except Murphy. The three new people leave with Murphy held at gunpoint – and are very unwilling to share what they want him for.

They leave the rest of the gang handcuffed together – and to a zombie which they dispatch with an umbrella. They manage to escape and Warren contacts Citizen Z who manages to track where Murphy’s kidnappers were heading before being cut off. Murphy himself makes sure he is seen by CCTV and, therefore, Citizen Z. He passes on the message through illuminated road signs

And what do Murphy’s kidnappers want? Him to go into a medical facility swarming with zombies and grab a big haul of oxycontin which they can trade with anyone (drugs have a high value in the apocalypse). Also, Meth zombies which means they have to go on foot because they’re very very sensitive to sound. No, really. While they’re distracted disabling their truck, Murphy drools into their water bottle… I have no idea why beyond to be super disgusting. Janice drinks from it (uckies uckies).

This seems to give Murphy the power of mind control. No, really. After asking lots of questions about her dead husband he manages to move her arm like she’s a puppet on a string and make her fire her gun. Mind control? Ok, this is when you just say “Z Nation” and run with it.

Warren & co arrive at their van which sets off an alarm. They kill the zombies that are attracted to the noise (they just found guns. Somewhere) but Murphy’s kidnappers now know they’re being followed.

Murphy manages to mind control Henry next into giving him water – did Henry get the toxic mind control spit? I’m not sure. If he did I’d like to thank the show for not making me see that. They reach their target full of super-speedy zombies on Ritalin. Because why not. When Fred gets shirty with Murphy, Murphy bites him – but stays in control and is still held at gun point so the plan’s still on. Fred gives Murphy ludicrously elaborate instructions on how to go in and get the drugs while Janice keeps randomly shouting her dead husband’s name because his zombie is wandering around. Murphy takes the opportunity to provide a word of comfort for her and stir up anger against Fred (apparently responsible for dead husband Jason’s death). He’s also using some kind of mental mojo on her.

Murphy walks through the hordes of zombies, managing to turn on the alarm and attract all the zombies away from the gate, allowing Fred, Henry and Janice to enter. Murphy also takes the chance to contact Citizen Z on “NSA.org”

Warren & co arrive and speed zombies and Ritalin zombies are apparently nothing compared to viagra zombies. Oh Z Nation. They sneak in and both groups end up in the warehouse, guns are drawn. But Murphy has turned off the alarm so the zombies start swarming again – Henry is caught and eaten. Janice runs into zombie husband Jason and doesn’t try to defend herself – letting him bite her. Warren & co finish off the rest of the zombies

But Murphy is now held at gunpoint by Fred. Murphy isn’t impressed – he uses his scary mind control power to make Fred let him go. He forces Fred to put the gun under his chin (Doc wants to know if they should stop Murphy, Warren says no). Murphy walks away – and Fred pulls the trigger.

The gang are a little freaked out, but Murphy pretends nothing unusual has happened. As they leave Warren kills 2 zombies and says “mercy granted” and Murphy responds, very calmly, with “I’m not sure that was necessary”. Oooookay, more than a little creepy.

Meanwhile, at Murphy’s insistence, Citizen Z is looking for Marilyn Mirch, a doctor. Is this a sudden new goal? I don’t remember this being a goal. I think she’s a doctor who injected vaccines into Murphy. She’s also very shady from what Citizen Z can dig up with big holes in her records.

Mind control Murphy. Mind control. Where did that come from!? That’s not even zombie related powers – I have no clue where this show is going any more.

And just to remind us it is Z Nation after all the heavy topics lately – Viagra zombies.