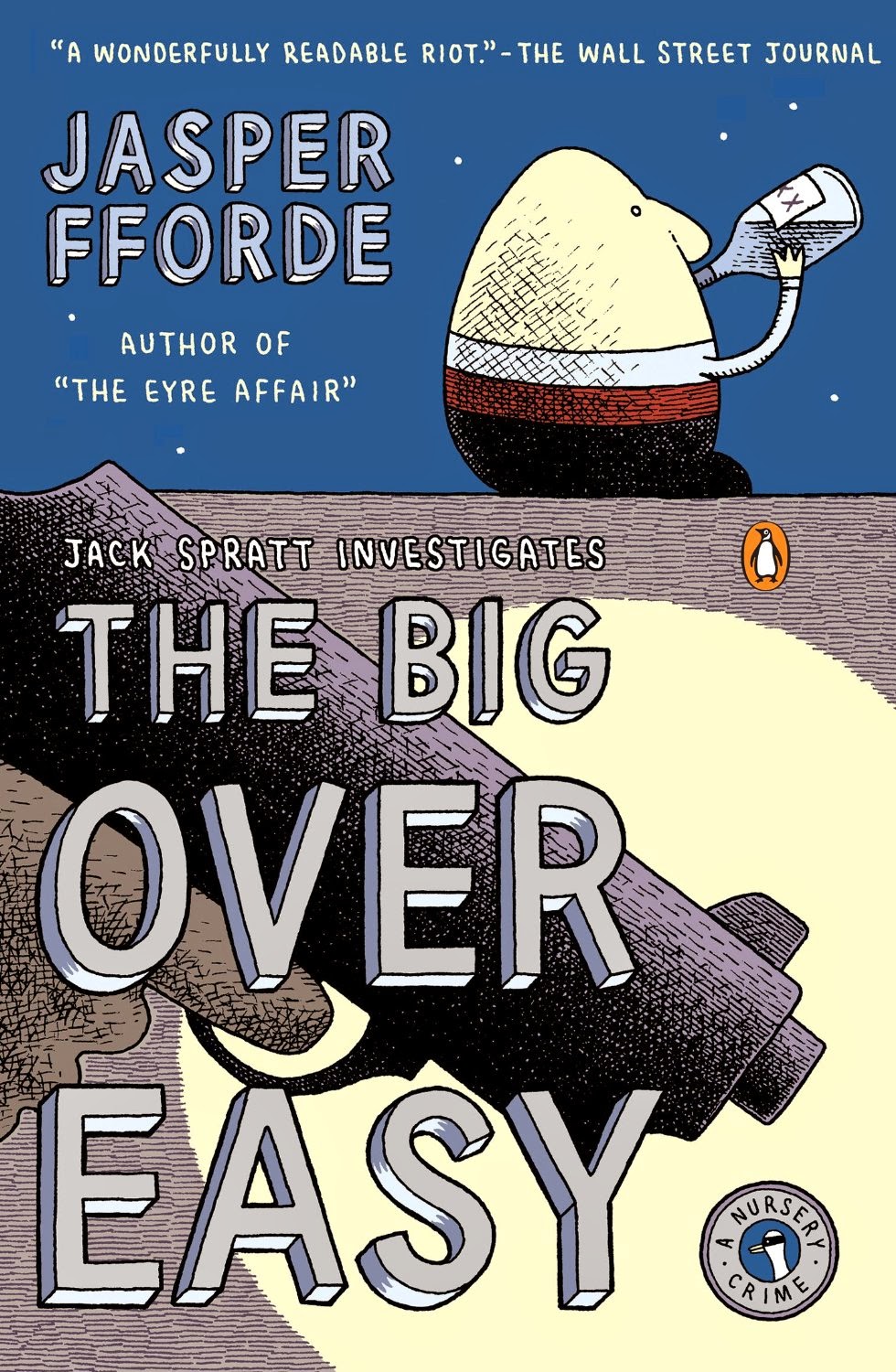 Jack Spratt (who has an unfortunate giant killing history) has lead the Nursey Crimes Division of Reading police for a long time – and has often been overlooked in favour of the more narratively pleasing detectives, like his nemesis Chymes
Joined by new Detective Sergent Mary Mary (she’s from Basingstoke and not ashamed) he tackles the case of Humpty Dumpty, found dead at the bottom of a wall. This could be the case that finally breaks the Nursery Crime Division – to say nothing of Jack and Mary’s ambitions towards joining the prestigious Guild of Detectives

The main selling point of this book has to be its humour. This book is hilarious. Even the little newspaper excepts had me in stitches:

The spinning industry was shaken to its foundations yesterday by the shocking royal proclamation that all spinning wheels in the nation were to be destroyed. The inexplicable edict was issued shortly after the King’s only daughter’s christening and is to be implemented immediately. Economic analysts predict that the repercussions on the wool, cloth and weaving trade may be far-reaching and potentially catastrophic. “We are seeking legal advice on the matter,” said Jenny Shuttle, leader of the Spinning & Associated Skills Labor Union. “While we love our King dearly, we will fight this through the courts every step of the way.” The King-in-opposition has demanded a judicial review

Honestly, I started compiling quotes of elements I found particularly hilarious in this book and stopped because I had so many excerpts that they were making up a review all of their own. I don’t think more than 5 pages passed at any one time where I didn’t laugh out loud and the smile never once left my face. This is one of those books you feel compelled to read aloud to people around you so they can join in the hilarity. There are so many little asides – like the man who collects cheap and nasty Victorian furniture which is extremely expensive because so little cheap and tacky furniture has actually survived long enough to be antique. Or Mary Mary’s complicated and hilarious Shakespeare betting scam (Tybalt upset the bookies by actually beating Romeo and it ended with the actual arrest of Richard III).
This book takes nursery tales (and even beings of legend – like Prometheus who, in addition to having some surprisingly deep and meaningful decisions, is also fighting extradition) and brings them to the real world with hilarious and amazing skill. We have Gorgio Porgia (the crime boss), Rumplestiltskin (in prison for his straw-into-gold scam), Bluebeard the serial killer, Old Mother Hubbard the landlady – so many glorious little references. And, of course, Jack Spratt himself and his carefully dissected bacon sandwiches and his unfortunate habit of killing giants (though, to be fair, only one was an actual giant, the other four were just really tall). It should be silly. It should be ridiculous. And it is – but it’s awesomely and hilariously so
I even love how this whole fairy tale theme is often achieved with subtle easter-eggs you need to be looking for – like the Butcher, Baker and Candlestick maker among Jack’s co-workers. Or the way Mary Mary actually contradicts people a lot.


That also works so well with the entire Britishness of the book – I always appreciate a book that can bring a really powerful sense of time and place. It has a really dry wit that works with the setting and their tones to bring hilarious little digs to just about every line in the book (like Mary Mary, who is from Basingstoke. And she’s not ashamed of that). This sense of brutishness and the understated snark of that goes really well with the whole concept of fairytales and the normal world colliding. Because, yes, the three little pigs would be considered for murder with their suspiciously pre-meditated “self-defence” and of course the local council would be checking the planning permission on a beanstalk!
As a (sometimes frustrated) fan of British crime drama I was in absolute could-not-stand-up-stitches over the lampooning of some of the tropes that undermine this genre. The whole idea of detectives being ranked on how entertaining their cases are, having an entire section of the police force based on their convoluted theories; even the lovely little snippets about things like legally banning investigations that are too trope laden. I laughed, I cackled, I couldn’t read this on public transport without getting funny looks. As someone who watches a lot of this genre this book was full of gems:

“It wasn’t that Reading had any more murders than Basingstoke—it just had better ones. Reading and the Thames Valley area was more of a “fairy cakes laced with strychnine” or “strangulation with a silk handkerchief” sort of place, where there were always bags of interesting suspects, convoluted motives and seemingly insignificant clues hidden in an inquiry of incalculable complexity yet solved within a week or two. By contrast, murders in Basingstoke were strictly blunt instruments, drunkenly wielded, solved within the hour—or not at all”

On joining the guild:

“That’s easily explained,” she replied. “I told them you were a chain-smoking vintage-Rolls-Royce-driving divorced alcoholic with an inability to form lasting relationships. And with a love of Puccini, Henry Moore and Magritte. And a big pipe

Of course, the trusty sidekicks to detectives can’t be trusted just to be able assistants – they have to be able to write up their adventures in proper, engaging prose for publication! When Mary Mary interviews for position, her publication record is as important as her actual detection skills
There were lovely excerpts with proposed laws like dog walkers being banned from discovering bodies (too clichéd!) and a terrible upset caused by Miss Maple solving a case where the Butler DID ACTUALLY DO IT!
The world, the characters and the humour are all the gems of this book. But the story, the actual murder mystery of Humpty Dumpty is actually really well done. It was twisty, there were a lot of excellent red herrings, double bluffs, moments when the mystery was almost solved but not quite –and even Mary Mary’s conflict between career and loyalty was an engaging one.
Inclusionwise, however, I’m afraid this book falls down. We have Mrs. Singh who is an awesome pathologist – but the POC pathologist is something we’ve poked before. She represents the entirety of the POC I remember from this book. There are no LGBT people.
Mary Mary is an excellent character though with some brilliant conflict, some hilarious lines of her own, some good character development and her own moral quandary which is handled excellently. I loved her and she worked well with Jack. Also noteworthy was Lola Vavoom, an awesome aging movie star who was excellent whenever she appeared. Though they only appeared briefly, Jack’s wife and mother were also pretty decent and engaging
I was a little surprised about the treatment of mental illness in this book since it is such a comedy and that usually lends itself to some cringeworthy and rather tasteless jokes. And yes, Dr. Quatt was a (hilarious) questionable doctor and Humpty’s mental health issues were largely egg based – but at the same time they may have been egg based but they were still treated as serious and due a level of respect. I’m not saying it was done well, per se, but that some of the more usual low hanging fruit were not plucked.
I love this book. I was genuinely sad when it ended because I was having so much fun reading it. I want to read it again because I am sure there are elements I missed. This is a book I will keep and read again whenever I’m feeling sad because it is guaranteed to have me collapsing with laughter no matter how down I am. It’s a gem, I love it and I both can’t wait to read the second one and also feel slightly nervous because this has set such an enormously high bar