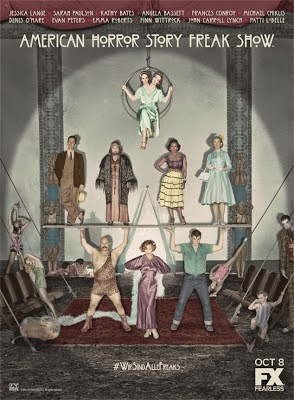 We open with Gloria seeing a doctor about her concerns about Dandy – she recounts his childhood and basically lots and lots of red flags screaming “serial killer” including a likely victim when he was still a child. The doctor insists on seeing Dandy. She doesn’t tell the doctor about Dandy killing Dora.

At the fair everyone goes looking for Ma Petite – and Jimmy finds her clothes, bloodstained and damaged. The assumption, to everyone’s horror and grief, is that an animal got her. Elsa is distraught.

Ethel is not impressed by Elsa’s theatrics and when they’re alone (perhaps aided by a bit of booze) Ethel out right accuses her of faking grief. Elsa hits her but Ethel doesn’t back down – accusing Elsa of only caring about being centre stage. We have a flashback showing the crowds who loved Ma Petite and Elsa’s clear resentment of it, as she does anyone more loved than her. Ethel hasn’t finished and goes on to deliver one of those epic performances where she tearfully and grimly talks about how Elsa has declined and how Ethel has come to dread spending time around her. Elsa keeps trying melodramatic refusals but Ethel isn’t shifting – especially since she remembered Elsa discussing killing the twins with Stanley.

The discussion gets more heated and Ethel reveals she has hidden the twins away – and she draws a gun and shoots Elsa in the leg. In her false leg – which Ethel didn’t even know about (which causes Elsa to note that Ethel doesn’t know her as well as she thinks she does AND to draw commonality with the performers of the show, even though she’s always avoided it before). This calls for a flashback, of a Dr. Massimo who treated her after she lost her legs.

Moving story aside, Ethel isn’t going to give up her plan of murdering Elsa and killing herself. Elsa resorts to asking for one last drink – and when going to the bottle she pulls a throwing knife and gets Ethel right in the eye. Bye-bye Ethel.

Cut to later on with Maggie Esmerald all tearful and being comforted in the tent telling Jimmy that she’s just found Ethel’s body in a crashed car; Maggie suggests it was suicide while Elsa puts on her usual performance of grief and horror which is just gloriously AWFUL (I know forensics weren’t what they are now – but a dagger to the eye?). They decide to go to the scene of death and Ethel’s suicide by beheading (it’s not completely implausible but very messy). Elsa continues to be ridiculously melodramatic and it’s clear Stanley and Maggie helped her dispose of Ethel; we get a flashback with Stanley confirming that (and in the flashback we see that Stanley doesn’t buy her bullshit either).

Time for Ethel’s funeral with some moving, tearful speeches from Jimmy and a great speech from Desiree which, somehow, gets well and truly hijacked by Penny talking about her father forcibly tattooing her. Ok, Penny you totally have a grievance and I’m sure everyone would love to hear it and help you – but beside someone’s open grave? That’s some epic thunder-stealing right there. They all note how hard it is to be a woman and how little men and the authority’s care when men who “own” them abuse them. Desire, Suzy and Eve all pledge to work with Penny to get her some revenge.

Which would be nice and intimidating if they hadn’t all already sworn revenge against Dell which still hasn’t gone anywhere.

This time, however, they means business and break into Penny’s dad’s house – Suzy being especially useful in breaking and entering. Shotgun wielding daddy is knocked out and kidnapped. He wakes up in the trailer – the plan is to tar and feather him. Afterwards Desiree also plans to castrate and murder him. She’s thorough. Penny pauses proceedings – not conscience, she wants to be the one to do it.

They get the tar and feathering part, but Maggie hears him screaming and runs to intervene. Desiree isn’t impressed – telling her it’s for Freak Women only and throws in that Maggie, a “pretty little white girl” has absolutely no idea what it’s like to be them. Still, Maggie keeps speaking about the consequences of them being caught (more than any kind of conscience clause) and it seems to convince Penny who tells them to let her dad go – she does tell him he only gets to live because “lizard lady” says so.

Elsa then goes on a recruitment drive (which is why she wasn’t at the funeral) – to a health spa where a fat woman called Barbara has been sent by her parents to lose weight. She doesn’t want to – she says she’s happy as she is and Elsa praises her and encourages the attitude. Yes, Elsa wants her to join the show.

Back at the show, Jimmy is drinking and grieving and Elsa seems bothered by this – telling him he has “other mothers” because every woman there had helped take care of him. She then brings in Barbara and lays out a huge meal in front of her. Jimmy isn’t impressed, the show and whole concept of freak shows are dying out. When Jimmy tries to leave Elsa stops him and tries to encourage him that Barbara can replace the comfort of Ethel – uh-huh, day of the funeral, remember? Jimmy calls her sick.

The next day, Jimmy’s still drunk and grieving and Maggie tries to snap him out of it. Jimmy loses his temper and stamps off, ranting and raving and tells her to “buzz off”.  They fight over the beer bottle and Jimmy stamps off in a temper. She leaves and Jimmy, bizarrely, turns to a very confused Barbara for a comforting hug.

Back to the Motts and Regina has come to visit, looking for her mother, Dora. Dandy dumps the entire problem in Gloria’s lap. Regina is not impressed by the most ridiculous excuse ever made for someone’s absence and decides to hang around.

Gloria does succeed in getting Dandy to the doctor where Dandy is his usual disturbing self. He comes home a bit miffed with Gloria who assures him that of course she doesn’t think Dandy is sick. Regina appears to warn them she’s going to the police if her mother doesn’t show up soon, so Dandy offers his mother a deal: he’ll see the doctor if she murders Regina. Y’know engaging in murder so your son will see the doctor about his murdering habit feels… counterproductive.

Gloria calls the doctor and tells him they’re off to Europe – he warns her that that would be such a very bad idea and Dandy really does need locking up. And Dandy shows up to throw the family’s dirty laundry around – turns out Dandy’s dad was Gloria’s cousin and he preyed on little girls – he blames his actions on her. She tries to comfort him and he threatens to kill himself. She begs him not to – so he kills her instead. He then bathes in a bath full of her blood.

My the bodycount is piling up.

And lo, this is American Horror Story family edition. Lots of deaths and… y’know I can’t say I particularly care about any of them. Ethel had some of the best scenes on the show and she brought an epic level of pathos that few could, but I’m just not invested in anyone on this show.

Is there something up with the timeline or something here? Because by the look of it, Ethel isn’t cold in the grave before people are lining up to tell Jimmy to get over it and move on. Doesn’t that guy get a couple of days to catch his breath, really? I think that went a long way to undermining a lot of the conflict around him – Maggie looked a bit of an arsehole and Elsa even more so (which is a shame because her comment about all the women of the camp raising him would do a lot for building the family feeling of the whole show).

The freak women revenge squad has a lot of potential – even just them together without revenge – because all of these characters need more screen time and they do some excellent poking of privilege and marginalisation (even Maggie, after she was told, focuses far more on the consequences they’ll face than any sense of moral rectitude or turning the other cheek). But it’s still bizarre that Dell remains untouched – and I don’t think American Horror Story, with its 8 gazillion storylines, is going to give them the attention he deserves

The Motts – don’t even slightly interest me; it’s a very tired, boring trope of “evil insane people are evil because insane” which is so cheap in horror (and murder mysteries – because who needs motive when you have mental illness). Regina may as well have an expiration date over her forehead (though I’d love her to kill Dandy).

And we have Barbara. Now there were fat ladies at freak shows for a long time and a lot of the language around her has been strong – she doesn’t feel shame or upset about being fat. She likes who she is. She enjoys who she is and, yes, she enjoys food. There’s some excellent commentary on people shaming her for being fat and judging her for eating. On the flip side, anything positive coming out of Elsa’s mouth is duplicitous at best, Barbara has spent a few short minutes on the screen and nearly all of that has been spent eating and Jimmy using her as… what? A comfort doll? We shall see what happens in the next few weeks but I’m going to guess “nothing good” is the likely answer.