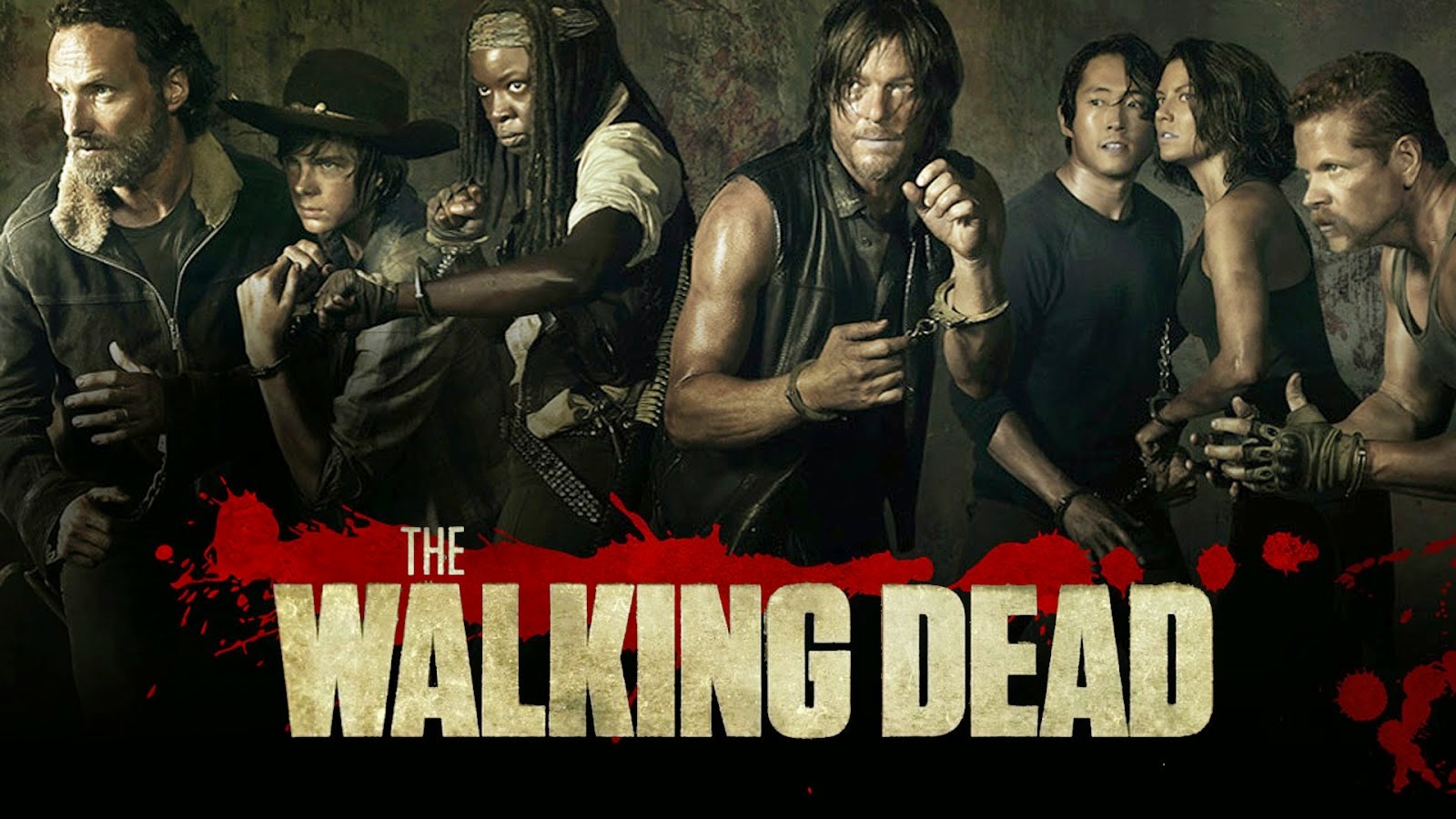 Lamson has escaped from Sasha and is now on the run, tied up, unarmed, surrounded by zombies and chased by Rick in a car. Rick hits him with the car. He’s very badly injured and Rick gets out to lecture him on how he only had to stop; Lamson reasonably points out that he didn’t know Rick, how could he trust them. He begs Rick to take him to the hospital; he says that Rick has been “out here too long” and Rick shoots him in the head.

Rick returns to the gang and tells Daryl that the whole hostage exchange may be a disaster – but Daryl thinks there’s a chance since Dawn isn’t a big fan of Lamson and maybe she’ll be happy he’s dead. This seems to be backed up by one of the cops, Shepherd, happily saying Lamson was eaten by zombies and she totally saw it. The other cop will go through with it because if Dawn thinks they killed Lamson she won’t agree with the trade since it will make her look weak.

Sasha and Tyrese have a moment remembering childhood and Tyrese trying to comfort Sasha over Lamson’s death. Tyrese tells her about Martin, the guy he let go who he shouldn’t have – saying basically he and Sasha are the same and did the same thing; showed mercy which isn’t a bad thing. Sasha thinks she’s changed

At the hospital, Dawn is a little stressed about her cops not checking in but apparently it isn’t unusual. She talks about the old leader of the group and how she replaced him and ends with the message “you don’t need their love, but you do need their respect” which is a fair point – but I don’t think Dawn has that either. To remind us of that we see a policeman abusing an old man for not sewing his uniform.

Beth challenges Dawn on her believe that they just have to hang on and do what they must until it’s over – but it isn’t over and isn’t going to be over. Dawn doesn’t listen – just tells Beth she owes her for protecting her, saving her and hiding what she did in her attempted escape. To reinforce all this, Donald, one of Dawn’s deputies arrives with lots of threats and saying it’s “time to make a change”. She tells him to back up and points a gun at him – reminding him that she killed the last guy in charge and reminding him of how far he has fallen from the cop he once was. There’s some nice lines “holding on to what we have” “and what do we have?!” back and forth before they fight because she let him get too close. During the fight Beth pushes him down an open elevator shaft (there’s a pack of zombies at the bottom, it’s where they dispose of bodies). Bye Donald you will not be missed. Dawn thanks Beth.

Afterwards they have a little moment in Carol’s room with Beth saying “I don’t cry any more” and also seeing through Dawn’s “protection” because all the police who have died are people who were dangerous to Dawn. Beth sums up how the hospital works – everyone uses everyone else to get what they want. Dawn is sure Beth is just naïve and she will come round and continues to try and aim for friendship.

Back at the church Gabriel limps along on his own until he finds the cannibal’s camp – complete with bbq leg rotting on the grill. He’s extremely troubled but has to hobble away from zombies. He makes it back to the church where he yells for someone to let him in (a nice reversal on what he did to the people he locked outside). He cowers behind the defences surrounded by a horde shouting to Karl and Michonne to let him in – that he “knows now”. They de-barricade the door in time to let him in, of course letting zombies in with him. There’s so many they lose the front of the church and have to barricade a back room. They end up crawling out of the same hole Gabriel made.

Outside Gabriel gasps to Michonne that he can’t run any more. This shows how little he knows Michonne who calmly tells him they’re not running. They barricade the zombies in the church. While they’re wondering what to do next, Glenn, Maggie & co arrive in the fire engine and use it to barricade the entrance. (How did he even know that was necessary? As far as Abraham knew, he was trapping Rick & co inside!)

Near the hospital, Rick meets up with two police from the hospital with the rest of the group keeping watch with rifles. He introduces himself as a cop and makes the prisoner exchange proposal.

We see Beth hide a pair of scissors in her cast before everyone gets ready to make the prisoner exchange. Time for the tense music. And Carol is awake (oh you’re all screwed now!). Rick tells Dawn Lamson got zombie and the hostages back him up. They exchange the prisoners no problem – but Dawn also demands Noah. She talks about him as Beth as property and even her own hostages are trying to stop her doing this (probably because they’ve seen what Rick & co can do). Noah tries to offer himself in sacrifice to Rick’s objection

Beth isn’t having it – she hugs Noah and when Dawn makes a remark about knowing Noah would be back you can see Beth snapping in her eyes. She stabs Dawn with the scissors – and Dawn shoots her in the head. Daryl responds by shooting Dawn in the head.

Office Shepherd, the former hostage, yells for everyone to hold their fire before it turns into bloody firefight. She makes her people stand down, saying it was just Dawn. While Rick’s gangs fight tears (Daryl collapsing with them), Shepherd offers to let them stay. Yeah that’s not happening – Rick counters by saying anyone who wants to leave can leave with them.

Glenn, Maggie, Michonne, Abraham et al arrive in the fire engine. Maggie’s look of hope fades as she sees them come out and she cries when she sees Daryl carrying Beth’s body.

Well that was a dramatic midseason finale for the Walking Dead, certainly maintaining the themes they’ve upheld so far. So let’s chew on a few of these.

On the overall storyline: so the theme has been “what lines will you cross” and I think it has held up because of the different ways it has been done. We have Eugene and his lies – but what would you do to survive? We have the cannibals at Terminus, of course – and them resorting to eating human flesh not just out of hunger but because of the need to be predators or they’ll be victims. Then there’s Dawn with a whole different set of terrible choices – how much does she tolerate, even enable, within her group in order to placate the abusers and keep the group together and her in control. How many lines does she let OTHERS cross for the sake of unity? On the flip side we have Gabriel receiving a brutal wake up call as to what is necessary as his church becomes a fortress and he’s no longer able to close his eyes to the world. Underlying all this is not only people questioning the morality repeatedly and well, but also Carol who is the very epitome of this question as we see with her time and again coupled with the more than a little annoying belated approval/apology from
Rick. In general this storyline really worked with both the characters they met and Carol, Daryl, Beth and occasional others really selling the conflict.

On Eugene: I’ve read the comics so this whole storyline was a pretty dull surprise to me. I think that the writers awareness of the spoilers out there also made them rush it to an early conclusion before it became an open secret

On Abraham and Rick: Both these characters don’t interest me a whole lot. Both tend to assume leadership when there’s no damn reason for it, neither are particularly qualified and both are trying to rehash moral conflicts that they’ve either a) already gone through or b) other characters have done better. They’re also both prone to big emotional moments while everyone else gets on with things. I think that’s a pointed comment on which characters can be enraged/break down/whatever and still be viewed sympathetically by the audience. While everyone else has to work through things, they get their Manpain.

On Tyrese, Michonne, Glenn and Maggie: I’ve put these together as criminally under-used this season. Every now and then we get glimmers – like Glenn talking sense into Abraham or Tyrese’s moral conflict or Michonne’s conflict over her sword and being a weapon but none of them have done much more than be backing characters – Michonne and Tyrese frequently taking the role of child minders. It’s a terrible waste to have these characters lurk in the background and be so utterly underused.

On Beth: I quite liked the whole character growth this season. Honestly it has been no secret that we haven’t been a fan of she-who-has-taken-to-her-bed and we certainly didn’t miss her. But she came into her own this season, she showed strength and growth, she learned when she was no longer able to shelter in the group and became a pretty decent character. Then died – I do sometimes think we get this kind of growth on previously forgotten characters to ensure that their deaths have more meaning; after all, if she had died at the beginning of this season we’d probably have cheered.

On the death of Bob: The Walking Dead has done a classic thing when it comes to dying minorities – it has painted itself into a corner. This is a show where people WILL die. It’s a given. Most of the current cast are going to die, and we will have regular deaths to remind us of this. But the way those deaths are treated are very different. When a major cast member dies it’s suitably dramatic to have a big sad-music scene and be a season finale point – see the death of Beth. When minor cast members die, it’s sad – but it’s another episode (T-Dog, Bob, Oscar… oooh is there a pattern there?). this is understandable, you need constant death to maintain the horror of the setting, but you couldn’t kill off, say, Daryl or Carol without a BIG DRAMATIC scene about it. There probably does need to be two categories of death for story telling purposes. The problem is that the integral, most developed characters on this show are largely White while the less developed, side “expendable” characters on this show are largely POC. Even now, looking at the survivors in the “expendable” category who haven’t been that developed and haven’t been around that long and we have Noah, Rosita, Sasha, Tara, Gabriel and maybe, maybe, Eugene and Abraham now the Washington storyline is done. I wouldn’t say even Tyrese is safe. The only POC in the “this death must be MAJOR” category are Michonne and Glenn – the other MAJOR DRAMATIC DEATHS, Rick, Karl, Carol, Maggie, Daryl are white. Again, The Walking Dead is writing themselves into a corner where the next expendable death will probably be another POC because of the disproportionate way characters are written.

Before this season began, social media was all aflutter because various members of the show hinted at Daryl being gay, even Norman Reedus claimed he was playing Daryl gay. Well, the show creators have now confirmed – after the midseason finale – that Daryl is straight. This kind of attempted media buzz is not ok and pretty homophobic – especially when we consider how utterly unused Tara is.