So the Espheni now have a Queen. Yes a queen. This is a thing Espheni have but has not come up at any point in the last five seasons nor have the Volm bothered to mention at all because the writers are not even pretending they’re not making this shit up as they go along.

Ben is spying on the Espheni and this queen using his Spikes, the conveniently-stumbled-upon-alien-tech and ice baths because why not (hey, post-apocalyptic Virginia apparently not in winter – where are you getting all that ice?)

Anne would rather Ben not kill himself in ice water but Tom is totally fine to with sacrificing him to touch the communicator, get hot, then have an ice bath.

At the military base we now have not just militias but entire military regiments who have appeared out of freaking nowhere and are now communicating with Digaan through the radio (after five seasons of silence) to accept the guidance of Mason’s Minions, praise be to Mason. A world map behind them implies they’re leading forces all over the world – like Risk but with clipboards and plot armour and even more ridiculous ideas than trying to defend Asia.

They also luck into more communications technology so they can communicate with the staggering, suddenly appearing, 42 militias all worshipping Mason for reasons unknown. Time for a speech of course

Tom also hallucinates his dead wife some more. So he wanders off alone to where he could be so easily ambushed. Instead he comes across a giant space ship – hey another alien ship for you to go riding in Tom! Hallucination Rachel tells Tom how they rescued him because they, the Dorni, like to choose humans who are useful (his epic plot armour is very useful indeed). Apparently The Queen is making it hard for the Dorni to hallucinate/communicate. They also think that the Queen arriving is pretty much the Espheni’s victory flag which makes her kind of bitter since she’s the last survivor of the Dorni who were destroyed by the Espheni (and turned into Skitters). She has a special weapon for the Queen. Which only Tom can use – it will destroy all the Espheni if he takes it to the queen

Yeaaaah even Tom mason must realise there’s a catch to this. Right? Right? He picks up the weapon. Uh-huh. Of course he does.

We hear someone die over the radio, reminding us that while the Masons & co may have forgotten the aliens for a few episodes, they’re still out there.

Ben debates with Maggie about risking his life some more being a spy and we get more nasty claims that the Nazcar lines are actually alien made. Ben is super sure it’s important and totally worth risking his life for

Matt and Evelyn continue to be couply and Maggie decides to apologise for Matt for the whole love triangle crap with his brothers which he had to deal with. Because both brothers being a pain in everyone’s arse is totally her fault (and it’s not like it, like any storyline, had been developed in enough of a manner to be a pain in anyone’s arse except mine). 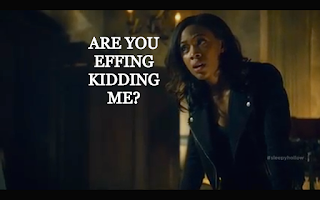 Ok… I’m good, I’m good. There’s only two more episodes. I can get through this.

Anyway she’s injured and Maggie really really really doesn’t trust her – but Matt is all for his creepy evil alien sister and he’s going to take her to town because bad ideas run in the family.

Back to the base with the evil alien child and Weaver again tries to inject some sense into the whole evil alien child being present in the base and at least demands she be locked up and hooded. Especially after what they saw of Katie last episode – crafty Espheni shape-shifted mole, as Weaver points out to Anne.

Anne decides she will question this Espheni mole because she’s married a Mason and their terrible ideas is rubbing off on her.

When Tom arrives he decides to talk to her as well – because it’s a terrible idea again. She has no super powers but does remember her time with the Espheni back when she was a fool deciding they were friends and she conveniently remembers the Espheni referring to a higher power (which she conveniently didn’t mention before for reasons). The Queen means the Espheni have apparently changed from “invasion” to “occupation.”

Of course Tom thinks Lexi is totally genuine and is back because of the Dorni. He also shows off his new unknown weapon he has as well. Tom talks about what a great tool Lexi could be while Anne faces the more emotional truth – that if he’s right her daughter is alive which is all painful and conflicted for her.

Tom also sends Ben to her with medical supplies because he’s determined to hand the potential Espheni spy EVERY POSSIBLY OPPORTUNITY to work on vulnerable people emotionally connected to her. Hey is it Hal’s turn next?

Tom also pretty much forces Ann to examine the weapon against her better judgement by threatening to do so with his own ineptitude. When it shoots gooey tentacles, Anne insists on testing it more. Marty, Weaver’s happy servant, reveals he’s a biochemist (yay more conveniently useful revelations!) so can totally help. They test it on rats and it kills them nastily. Anne concludes it probably could kill the Espheni but would likely kill everyone else as well

Well. Duh. Really? I am shocked?

Tom is certainly shocked! I mean, a near extinct revenge-driven race may have motives that revolve more around wiping out the Espheni than preserving humanity? Really? WHO COULD HAVE IMAGINED SUCH A THING?!

I seriously did not stock enough booze to watch this show.

Anne points out the obvious – and Anne and Cochise consider ways to adapt the weapon to make it somewhat workable. Weaver suggests using the weapon on Lexi (he’s totally sure she’s Espheni) but Tom isn’t going for that.

Hal is the only Mason who is not eager to spend time with his evil traitorous maybe-sister-maybe-clone and he gets lectured by Matt for his whole expression of doubt as to the best solution.

And then Pope attacks.

Gunfight, extras die. Anthony runs around looking really vulnerable. Pope doesn’t even try to be consistent with his previous talk about innocents dying. Anthony gets himself shot saving Anne. What he’s finally decided random killing isn’t good? Pope gets blown up. Maybe. Someone show me a body. Please gods show me a body. Y’know this storyline could easily have been over several episodes ago.

And Anne and a biochemist who worked on the flavours of beer managed to genetically alter the Dorni virus thing so it doesn’t kill humans. In a few hours. With virtually no equipment. Of course the do.

Interlude over it’s back to Tom and Hal debating whether Lexi is evil and Ben continues to near kill himself with the communicator, all alone, until he gets a message about Tom. Of course he does.

Tom decides to speak to Lexi all alone and she tells him lots of ominous thinks – basically that the Espheni are “coming back” referring to the Naxcar lines. Then she rips him through the cage doors and nearly strangles him to death until Ben throws the new weapon at her – which kills her. Yes she’s an Espheni spy/clone/thing. Yes this was Ben’s warning – the Espheni are aiming at Tom because he’s so important.

Also, of course, Lexi showing up is like them stumbling over the communicator – a damn convenient way to test the weapon. The storytelling on this show is some of the laziest I’ve ever come across.

He also decides he knows where the Queen is – the Lincoln Memorial in DC. Of course.

The alive (I’m shocked) Anthony apologises to Weaver who looks all grim before forgiving him, of course, though under watch of course. There’s only one episode left, him turning traitor got him more screen time than 5 seasons of playing nice.

They also blow up the communicator and we have a few more Lexi angst moments – before the Espheni have a wave of forces because they’re sick of being ignored.

Again on the Nazcar lines – there is a prevailing racist trope that continually claims the achievements of ancient civilisations outside of Europe were created by aliens. The underlying implication is, basically, there’s no way these POC could possibly have achieved X.

Let me be clear now that I am going to be epicly pissed if we had 5 seasons of nonsensical storylines, this horrendous last season of Pope and the 14th Virginia only to have the story end because random aliens gave Tom a random weapon that kills the randomly appearing Queen and Deus Exes this series so completely that Zeus himself would throw down his lightning bolt in disgust.

This show doesn’t even try to make sense. I’m not even going to try and stab the many terrible, nonsensical elements of this episode, the pointless storylines dragging themselves onwards like Walking Dead extras. It’s redundant at this point.

I have restored to memes, Falling Skies. Look at how low you've driven me