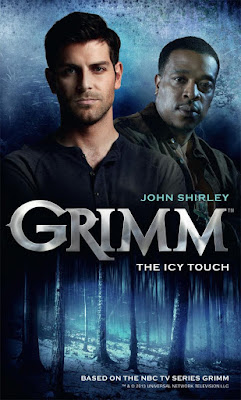 There’s a new threat in Portland – the Icy Touch, a criminal cartel made entirely out of brutal Wesen. The leader of which has a long standing grudge against Nick and his family

But how can the police face a criminal gang when they cannot be told about the wesen? And how can Nick fight as a Grimm when he is also bound by his work as a cop – and his own fear of what he is becoming?

This is a book based on a TV series which means it’s pretty much impossible to read it without contrasting to its source material. Not only that, I don’t think it’s intended for us to do so – especially with Grimm having so many seasons of world building and character development means that I don’t think you could read any of these books without having watched the show. There’s too much to recap and include to make this book stand alone

Though, I will say this book does a decent job of trying (albeit not very well) but I think it would be much smoother if it just expected all of its readers to watch the show – because I found some of the elements to make it stand alone to be… off. Like Nick can see Wesen as Wesen, including their type, even when they’re not woged which is a bit of a deviation. There’s also a lot more emphasis on some weird Grimm instincts. I did like how they managed to greatly explore the conflict between Nick the cop (often through Hank’s eyes) and Nick the Grimm. How he is often stepping outside the law and a lot of unsanctioned violence. This also couples with his own moral conflict since his actions are not only not ok for a cop, but are generally not acceptable anyway. I also liked how there was more of Juliette’s discomfort and distrust being analysed than we’ve really seen on the show

So, there are elements of moving above and beyond the show that do work and why have books of the show if you’re not going to develop them further?

However, I mainly think the adaption failed. There are some elements like Nick’s new powers that were just wrong.

But the most jarring to me is the voice of every character. All of them sound wrong to me. Hank sounds extremely whiny. Sergeant Wu has been written by someone with much less sense of humour but is still desperately trying to force his wit – so he keeps popping in, making bad jokes, then going away. But the worst are Renard – who is grossly autocratic and high handed and alien to everything on the show. And Monroe who… just bemuses me. This is not Monroe. It doesn’t even come close to resembling Monroe. My gods why would anyone write Monroe like this?!

This means that Monroe’s conflicts over being a Blutbad and his morality all kind of fall flat as well because I just can’t connect them to the character because his characterisation is just so terrible.

The plot itself isn’t bad – it’s very action packed, we have lots of scenes of confrontations with the bad guys along with the ongoing difficulty of trying to take on Wesen while maintaining secrecy. This is all very well complicated by the fact the wesen have effectively formed a criminal cartel which is huge and needs police resources to combat…

But it starts and ends shakily. I have no idea why the coins of Zakynthos are shoe-horned into this story. It was unnecessary and it relies on the premise that Nick’s mother, Kelley, would think putting them in a bank is actually keeping them safe. Nope. Nope. Nope. You would get those coins from her cold dead hands. The whole generational feud also felt ridiculously unnecessary.

The ending has a random, unmentioned before, Deus Ex organisation being dropped in to make all the badness go away. It’s clumsy and it’s lazy.

I’ve said the characterisation fails – but that doubles for minorities. Hank has some good moments but spends most of the book pouting and whining about his clothes and the secrecy. Wu is PAINFUL. He is jammed in, reads a joke from a Christmas Cracker then vanishes again, hopefully in shame to think about his life and his choices. We had some past sight with a random Asian wesen but that’s about all we can say about her. Juliette and Rosalee have been clumsily inserted to no real purpose (though, to be fair, many episodes of the show felt that they had ALSO done this to these characters). Much of the book rests on rescuing a kidnapped girl because of course it does, how else do we motivate men to act than kidnapping a woman?

Some of the gang members are Latino and there is a moment which nicely touches on some members being forced into that gang without any real support, due to economics and the pressures facing undocumented migrants. So there was some nuance – but it did mean our latino representation were still gang members.

All in all, I’m not impressed. The book is lazy, clumsy and feels like only the loosest attention to the source material and has a plot line that is pushed along by some pretty heavy narrative convenience. It doesn’t work and it feels, sadly, like a blatant attempt to cash in on the show without really caring much about what is produced.