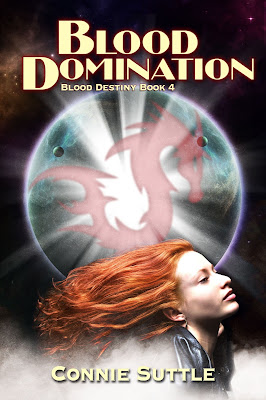 Due to her being hunted by various forces, Wlodek decide the best thing to do with Lissa is get her out of the way for a while. Thankfully mysterious Griffin has an idea

So I pick up the next book in this vampire series and….

Ok that was unexpected. I admit to having reservations, but I’m not adverse to genre mash-up even if I’ve rarely actually seen it do well and if, after three books in this series, I’m not confident that this series would be the one to do it well. And, alas, I was surprisingly right.

So, Lissa ends up going to another world and meeting a range of new species and it is done so incredibly lazily that was just quite depressing. Lissa is moved to this new world through woo-woo. That woo-woo also comes with convenient understand-any-language woo-woo to avoid any kind of culture shock

Of which there is absolutely none. The world is called Refizan, the people are Refizani and may or may not be human. If they’re not they look entirely like humans. And by humans I mean white western humans (there’s an Asian-appearing-alien-who-looks-human-because-LAZY who is apparently clearly not from this planet because he’s not white). Their culture seems to be a vaguely western parallel. Their buildings, cities, market place, food, manufactured products, modes of travel, news dissemination, media – none of it is presented as any different from what Lissa had experienced in the US and London. There was no real description of the world to make it seem any different from a generic western city. Flying over the city as mist, Lissa can pick out buildings like shops and hospitals and religious buildings. Their government is a fairly generic democracy which, like anything el

Honestly, you could replace “Refizan” with “Ohio” and not really make any real difference to the story. An alien world that is completely unrecognisable from a western nation populated by people who are indistinguishable from white westerners with all language and transports difficulties being resolved by woo-woo is some of the laziest damn aliens I’ve ever seen – and that includes every film and TV show that decided a little bit of heavy make up would be sufficient to depict an alien species. Though we did have a giant blue dude. Who was giant. And blue. That’s kind of it.

Even on the supernatural side, the world has its own vampire circle which is basically a direct parallel to Wlodek and his people on Earth. Except lazier

Why lazier? Because to make this lazy plot glide along with minimal difficulty there is no real conflict. And one of the sources of no conflict is Gabron, head of the Refizan vampire council who basically nods and smiles to everything Lissa says because she is the Specilist Person Ever, Praise be Her Sueness and, like so many others, he found her super hot and wants to have sex with her. Despite being a complete stranger and alien, Lissa is trusted, her every suspicion and suggestion is quickly followed up. Including when she declares various prominent vampires to be super evil and deserving of imprisonment. Effectively this turns the vampires into Lissa’s personal army.

Yet the laziness continues! Because this book is AMAZINGLY lazily written. The next item of laziness is Lissa’s powers. Her super shiny Mary Sue powers that make her super-duper dangerous even if she is only 5 years a vampire and able to kill just about anything she comes across with zero conflict at all because she is just that special. Her powers are completely unprecedented and completely eclipse everything any other vampire has ever been able to achieve. On top of being able to kill anything around her with minimal effort, she also has the useful ability of being able to smell evil

Yes we’re introduced to dimension hopping light and dark elves to try and justify this, but it comes down to being able to “smell evil”. With this infallible evil detector she kills bad guys with her super killy powers. No, really, she uses this detect evil power with such lack of subtlety that a 10 year old playing a Paladin in a D&D game would disapprove.

There is no nuance in Lissa’s powers and also no nuance in the bad guys – the Solar Red priests. This is a foreign religion coming to this planet and is regarded with suspicion and worry and accused of human sacrifice. Of course this is an excellent way to examine suspicion of the outsider, how foreign faiths can be demonised, how the rituals we’re familiar with are comforting while foreign ritual seems barbaric even though, objectively, both make as little real sense and seem a little weird and it could be a great way to examine how the persecution of minority religions happens

HAH! No. Solar Red priests are evil. They rape, torture and murder with impunity. In fact that’s all they do. The entire point of this religion is to be pure evil – I can’t even imagine this religion having holy texts. They regularly kidnap and torture people for funsies, they’re brutal for the sheer sake of brutality. They are caricatures of evil. There’s no attempt at nuance here, let alone any attempt to depict HOW this religion has gained so many adherents. I mean, what do you do, hand out religious tracts about the joys of torturing children?

They’re super-duper evil because they’re being controlled by super-duper-evil aliens. Again, that pretty much sums up what they are. Evil for the sake of evilness

This very black and white, simplistic depiction of the bad guys just covers everything. There’s no conflict because Lissa is so deadly. There’s no machinations because the government (both vampire and Refizani) is so damn bizarrely reasonably (despite being quite happy to allow a religion to flourish whose entire purpose was “kill all the things”), there’s no real conflict because Lissa is Mary Sue of death and her allies Dragon is made of killy death and then we introduce Kifirin (more on him later) who is the supreme god of Deux Ex Machinae Awesome power.

Even the way the plot works is insultingly lazy. Lissa arrives on Refizani, sees a newspaper article about a terribad religion and instantly launches on a brutal murderous crusade about them. Seriously, she reads an article in a newspaper within minutes of arriving and within the hour is murdering dozens – hundreds – of priests on the strength of this. I cannot even begin to imagine how this makes sense. How does Lissa even function on Earth without rapidly slaughtering anyone the newspapers has deemed the bad guy? Good gods, this woman lives in London! She must have seen the Daily Mail! Imagine the carnage she’d unleash!

While she’s playing with aliens, back on Earth we’ve got random characters facing off against Xenides, the naughty-bad-rebel vampires who basically do… precious little. Until the end when they decide to launch an attack that is utterly doomed because of all the good guy Deux Ex’s gathered together. But it does allow a gazillion names to be mentioned to tax you to care enough about all of them to remember who they are.

So I really don’t like this book because of its immense laziness on just about every level, but the fail does not end there – let us now look, with a due sense of dread, at the depiction of marginalised people

First of all let’s look at POC. We have a briefly mentioned Arabic terrorist, because of course. He isn’t a character, just a tool who uses suicide bombers. And in Refizan we have Dragon who is Asian and runs a martial arts dojo and has dragon tattoos because just because you’re an alien doesn’t mean you can’t be a walking stereotype. Lissa has a couple of gay men who briefly appear to be her fawning fanclub but serve little other use.

Glaringly, despite the eight kajillion characters, Lissa is pretty much the only woman with more than the briefest appearance. Seriously there is a huge cast here but because of that very very very tiresome trope that supernatural beings are nearly always men (for Reasons) they’re all men. Lissa is almost completely surrounded by men at all times. The few women who do appear are bitter jealous nasty beings (referred to as “bitches”) who, of course, are super jealous of the perfect Lissa Sue.

On top of that Lissa serves as a “love interest” for a lot of the men. By which I mean Gavin, Gabron, Alex and Kirifin all feel the need to force their romantic attention on Lissa regardless of what she says in the matter. From Gavin’s forced wedding, to Gabron and Kirifin constantly pressing her and outright groping her no matter how often she told her to stop, to Alex openly planning to kidnap her despite his unforgiveable actions in the last book.

We also continue the same problems of the last book – Lissa is abused, controlled, dictated to and repeatedly attempted to enslave and oppress repeatedly – including by people who recognise that her experiences with them and abused past makes her already VERY UNWILLING TO TRUST THEM.

As an aside on that – while I like that Lissa’s abused past is drawn upon to explain her character, her distrust and caution, I hate that this is relied upon to explain her relationship with Wlodek, Gavin and Merrill while completely and utterly ignoring that their own actions are so utterly appalling that it would be patently ridiculous for her to ever trust them, let alone regard them with anything resembling affection, kindness or anything but seething loathing

Yet she does – despite them adding YET MORE unacceptable behaviour this book, she again seems to be well on the path to forgiving them. She runs of for a brief tantrum and slaying-of-evil-womens-because-there-can-only-be-one and then… comes home and even gets back into bed with Gavin.