Rowena is trying to form a coven. The Mega Coven, her way of trumping the Grand Coven. No, no-one likes the name, it’s certainly not helping her recruit anyone. Also they’re not fools – she may have killed the head of the last coven (which she won’t admit) but they know she has made lots of enemies including the Winchesters and have no wish to sign up to play Rowena’s bodyguards. She tries to claim she killed the King of Hell to impress them – only to learn he’s still alive.

Dean is still all spacing out about the Darkness woman and, probably because of this, is not so quick to see Amarra the why-didn’t-you-burn-her-child as all evil. They also get a bit snarky about god not being around to take care of the darkness (even Castiel is a little… edgy about god’s ongoing absence). Sam suggests that the best alternative to god is… Metatron. Bad Moose! Bad idea.

They’re dealing with the spell Rowena put on Castiel by chaining him up. He’s still out of control and they need Rowena to lift it. Which means Dean tries to call Crowley who isn’t answer. Metatron is also elusive (and can we have a d’awwwww for Castiel who seems quite sad that Sam and Dean don’t like his car). Castiel also can’t really help them with where Metatron might be beyond ”he likes waffles”

The spell hits again when Castiel has a seizure (+10 points for responding to Dean’s “do you know where/when you are” with “Earth. Several billion years since the beginning.”). He’s also hearing voices (yet more bonus points for Dean’s quick step back) of all the angels looking for him and Metatron.

While Crowley has taken in the evil soulless child and educating her on how to be super duper evil. All Amarra wants is to be saved from god. He’s also dispatched demons to hunt down his mother.

Which completely interrupts her latest recruitment attempt. Being Rowena she leaves with class and grace (and an awesome furniture barrier spell).

Amarra has been looking through pictures of the Earth and is impressed by what god made which she tells Darkness Lady, communicating through a mirror (and here I thought she was Darkness Lady but since she says “I am what you are becoming” she may be). Darkness Lady wants to make sure she stays on message and even if god has made pretty pretty things.

She’s also learning at an extreme pace while Crowley is fumbling around trying to play kindly uncle. Amarra continues to kind of scare him eating souls – demon souls. She thinks god screwed up with creation and Crowley tries to push her towards changing the world – to make it pure evil. She’s not a big fan of that plan (nor is he, after a moment’s thought because the joy of tempting people to evil would be lost). She just doesn’t care about good or evil (or, which I don’t think Crowley has realised, creation at all).

Crowley keeps feeding demons to Amarra and he worries about Amarra becoming too powerful and too confident before he’s sure she’s on side. He wants to limit her consumption – Amarra doesn’t agree with that. A few souls more she’s grown up again and not even slightly willing to listen to Crowley.

An angel and a demon meet in a bar. No, it’s not a joke – they meet up to complain about how bad things are and how both sides have huge alarms going off and their bosses aren’t doing anything about it. They both lament being the grunts at the bottom of the ladder. They even discuss working together to stop it.

Sam and Dean catch up with one of the witches who met with Rowena (“I have rights” “and I have a fake badge.”) They want to know where Rowena is using her to do the magic searching so Crowley doesn’t kill her on general principles.

They do catch up with Rowena and after some attempted dramatics but they do get some magic cuffs on her. This means they retrieve the codex and Charlie’s (who is dead, utterly wrongly and I’m still not over that) code breaking but not the terribad evil book. She doesn’t want to give it up – and she calls Dean’s bluff when he threatens to call Crowley. Because she’s Rowena and she’s good at these deals. She also pokes his fresh crop of grief and guilt over unleashing the darkness. Yes she’s good at that as well

To top it off they can’t even get her to cure Castiel because he’s gone wandering. They go looking, putting Rowena in the back seat (despite everything, I do like her). She also nicely pokes at the secrets Sam has kept from Dean (the deal he made with Sam to kill Crowley in exchange for removing he mark). Rowena is an expert at poking sore spots

Dean does find Castiel hunting and strangling an innocent woman he’s run across – Dean manages to talk Castiel down – and then Castiel attacks him. Been there before – when Rowena arrives at Sam’s gunpoint and de-spells him. Castiel is, presumably, returned to normal. And Rowena escapes – of course she does (even though they promised to let her go, she wasn’t going to trusty them on it.)

Back at the Winchester cave, Castiel is all guilty and Dean is all reassuring – but won’t let Castiel heal him because of his own guilt issues. Angst angst angst.

It’s been a while since I’ve had a gratuitous Castiel picture – and he as mega cute and fun this episode it’s time for another. 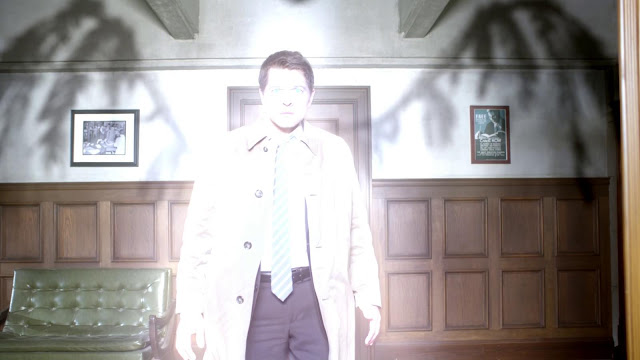 Actually this whole episode had some excellent one liners. There wasn’t a lot of solid plot per se but I think everything is being set up – Castiel cured, Crowley and Amarra as well as Dean’s issues

I wasn’t a fan of Rowena and Crowley together last season but on her own she’s a very very fun character (once we remove the dynamic that kills both her and Crowley’s character).

Supernatural has been using Dean’s nasty fetish for Asian women as comic relief for a gazillion seasons now and there has never once been even a hint of rejecting the wrongness of this. It’s not even a plot point – it’s a recurring joke and it’s both not funny and creepy. Racial fetishisation is generally nasty – and Asian women are all-too-often a target of it.