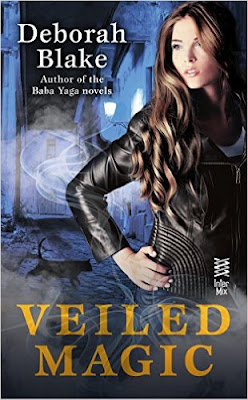 Donata Santori is a witch working for the police – one of the future supernaturals that are publicly known to the general population. But even with her useful ability to speak to the dead doesn’t make her very popular with her fellows.

Just when she’s starting to get out of the basement and be trusted one of those ghosts comes to her with a mission that not only risks that newfound trust – but also her life. There’s a painting that holds not just all the secrets of the paranormal races (which the Inquisition Cabal would love to get their hands on to push their crusade) but also a lost race… which may be even more destructive than a renewed inquisition.

I do like Donata, the protagonist. Again she is a very classic Urban Fantasy protagonist who ticks a lot of boxes but does it well. She’s a witch, which in this world means lots of ritual magic and utility spells but not much in the way of throwing lightning. She’s also a cop (therefore involve in investigation) and knows enough martial arts to be useful in a fight and not be a damsel. She’s active and dangerous without being super-powerful and story breaking. I really like how she asserts herself when defying both the authority of the Council and her disapproving family (and certainly her two male cohorts) but does so without the classic suicidal sass that is so common to the genre (Honestly, I am tired of raging protagonist raging at authority which should squish them so many times over but never ever does). And she has conflicts with her family but does love them and seems to be blessedly free of the almost compulsory tragic past. I also quite like that the romance was only briefly the cause of men fighting each other

I mentioned that she can hold her own in a fight though it is slightly frustrating that her two male cohorts are so much more physically dangerous than she is – it’s such a trope and when the supernatural are involved it’s so unnecessary. Why can’t the woman be the one with physical super powers and the man be the one with support magic?

The world setting is also interesting – again, it’s very classic. We have a range of supernatural beings forming a council – some of which is known to humanity (the witches) but most of them are still very much hidden. What is interesting is that the creatures chosen are a nice difference from the usual vampires/werewolves. We have witches which are very similar, but also dragons, ghouls, a different take on fae and a very different look at wereanimals.

The uniqueness of these creatures are not that developed too much in one book – I think the author has done an excellent job of introducing a fair amount of features for these beings without overdoing it or clogging the world building of a brand new book – it’s a very hard balance to strike with a new book with a lot of world building to fit into a small space. On top of that I like that some of that world building time is dedicated to not just woo-woo but also culture and personality of the different supernatural – suggesting the world building is richer than “these are dragons, they breathe fire”.

I also like how the history, the Compact that restrains the supernatural, has been nicely developed with some very understandable good detail. I really do suspect that the author has a huge book of world building notes to back it all up.

The story is well done with a nice plot that introduces the world excellently, the characters, the main actors and setting the protagonist on her path for future books. The plot is fun and decent – but I think the pacing falls away in places. Sometimes I think action scenes are thrown in to take up space and there’s a lot of time spent with Donata not being able to do a great deal. It does lag unfortunately about the middle

I do really like the Italian monk and Friar Matthew they add a level of complexity and nuance to the enemy. The Catholic church is presented as the historic and present opponent to the supernatural. The organisation remains committed to destroying the supernatural but despite its powerful opposition, there are still members of the church who do not support their zeal for a brutal inquisition.

The book is sadly lacking in diversity – we have a brief appearance of Dhumavati, a tantric goddess but she’s not really mentioned as such unless you know that she is. There’s also a briefly appearing nameless Black bar tender. There are no LGBT people. There’s also a fair amount of appropriation going on with the witches “coming out of the closet” and them being presented as an oppressed minority (with super powers even if they did face considerable persecution in this world setting). There’s also a moment when Hitler is called a supernatural. Can we stop calling Hitler Supernatural? He was human, a terrible human monster – but still human. It doesn’t take woo-woo.

I would say this book is an excellent start to a new series I’m eager to keep following. We have a fun protagonist, an excellent world setting that has been well introduced and it really has vast potential to be far more. The writing is fun if it could use a little speeding up and it really shows that you can still tell an excellent story with the basic building blocks of a classic Urban Fantasy. The template is still fun.