Seventh Grave and No Body (Charley Davidson #7) by Darynda Jones 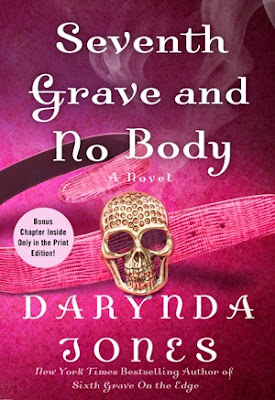 Charley is facing pregnancy, ominous prophecy and 12 lethal hell hounds hunting her down which are seemingly utterly unkillable

She has also given up coffee. The horror!

After that she also has to deal with her ongoing complex relationship with Reyes, her missing father, a serial killer who is hiding their murders as suicides and a grave robber.

First thing I really like about this book – Charley is finally starting to realise her potential.

Oh, every now and then she has managed to throw out a cool shiny super power without being able to replicate it or quite knowing what she is doing. And Reyes repeatedly said something about how super awesomely powerful she was because awesome and special and awesome. But we didn’t really see it. Ultimately, Reyes was the powerful one barring her odd one-off moments. Reyes was the menacing big scary son-of-lucifer who repeatedly had to come to her rescue and often tried to lock her up/imprison her “for her own good” and to “keep her safe.” This annoying practice was only exacerbated by his habit of making decisions to force their relationship onwards despite her objections and generally being an arrogant patronising arsehole to her.

This book finally had Charley change that which still maintaining balance– managing to give her massive, conscious power without making her a terrible Mary Sue or breaking the story or making any opposition insignificant. And not only is Charley now consciously wielding her awesome powers, saving the others (who nobly and powerfully get badly mailed while she uses super powers – yes, for once we have a book where Charley isn’t the one who gets super mauled) and being the super weapon that saves the day – but she’s also using them against Reyes

Yes, it is acknowledged that Charley can not only bring down Reyes (and Osh), but that she can do it easily. She can drop him. She can do it easily. Not only can she do it, but she is willing to do it and does do it. When he does his endless “I’m going to force you to do this” posturing she now, finally, turns it round and points out how hollow it is. He no longer has any real power to imprison her (since she can walk through the actual chains he uses to control her, yes, actual chains) and no realistic power to stop her. This subverts the entire series to date, an entire series of Reyes’ dominance and, yes, that is amazing and long past time.

It’s such a refreshing change that even the inevitable peril-that-Reyes-has-to-rescue-her-from scene (seriously why does every book have to have this scene? It’s getting ludicrous) felt less like yet another attempt to ensure Charley is always saved by her big strong sexy man rather than an attempt to try and establish some limitations to her awesomeness.

In previous books I’ve complained that the books can get confused. We tend to get a gazillion plot lines all running at once and it’s generally too much, too much going on for anything to be developed fully and it does get very confused.

Yet it seems to hold together more in a much more coherent and less distracted fashion. I think it’s because the actual police cases – the Serial killer and certainly the FBI cold case – are pretty neglected for a large chunk of the book, focusing far more on the supernatural mysteries. I still think that there’s too much going on and some of the storylines are neglected – but the main storylines get enough attention and development to make it more than worthwhile.

One element of this development I didn’t like is that Charley is finally learning caution and to value her own life – because she’s pregnant. I find it annoying she could never value herself sufficiently – while at the same time I do like how Reyes describes her as a “terrible god” because she throws herself into every tiny cause there is and doesn’t let people learn from their mistakes or deal with their own issues, she is very driven to a degree that is dangerously selfless.

On top of this we get the same strengths that have made me love this series for so long – Charlie and Cookie being the incredibly fun and funny characters they are. This series’ biggest strength has always been its humour – it’s hilarious, gloriously hilarious and I can’t help but love Charlie.

I also have to mention Jennifer – the ex-bff of Charleys who became such a terrible Mean Girl. This book goes a long way to humanising her and removing that terrible sexist trope. I loved this not just for removing this terribad awful caricature of a woman and humanising her – but it fits with Cookie and Charley and Special Agent Carson in Charley having a number of good women in her life who are worthy of being there. It’s sad that that’s notable, but it is. I also like Charley’s take on the word “slut”.

We continue to have some interesting portrayals of disability. Quentin is a Deaf character with a very small role in this book, but there is still an effort to reference Deaf culture. Charley has her ongoing issues with PTSD and trauma which she still has to fight through – albeit in a very intermittent degree. We also have some excellent call out of shaming a suicide victim – making it clear that mental illness is responsible and condemning the victim is ignorant and cruel.

Two of the main characters are POC – Reyes (latino) and Garrett (Black). Both are very attractive, very skilled and endlessly frustrated by Charley. And so far they are no that defined by any tropes – though Garrett now being linked to voodoo could definitely go to some dubious places. Reyes is an ex-convict, but also an innocent man.  Similarly, Angel (who only makes a brief appearance) is another latino character who starts as a trope (a dead gang member) which is then subverted. We do have a tough-as-nails hard Black woman judge who is more than a little tropey – though she does rightfully slap Charley down hard for some bullshit racist nonsense.

There are some other POC character in bit parts – I do appreciate background characters having inclusion as well – because diversity has to happen at every level, not just background and not just main characters

Again there are no LGBT characters, sadly, and after 7 books that’s very poor. We have a reference to a gay teenager who committed suicide (check those tropes!) long before the books started (because he was pining desperately after the straight guy – yes, check those tropes). Charley happily tells Amber that it’s totally ok if she likes girls which yay great I guess- but the whole scene really exists to reaffirm the heterosexuality of both characters.

While there are still some issues, this book and this series are definitely excellent and fun. More than that, not only does this book continue the excellent hilarity and joy of this series which makes me love it so much – but increasingly we’re getting more and more of the meta-plot. This is excellent – on top of that Charley is truly growing into her story, her world and her meta as it grows deeper and richer

It’s fun and light and hilarious – but now we’re getting something more on top of that.