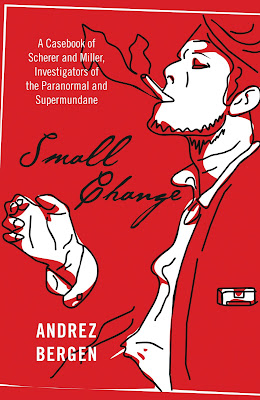 Roy Scherer and Suzie Miller run a detective agency. Though their clients are a little different from what you see in the usual Film Noir. They’re hunting the werewolves, resolving the hauntings, dealing with angry spirits and tripping over the odd vampire

Well, usually. It doesn’t always go to plan. Usually it doesn’t. But with copious alcohol and few resources, who else are you going to call?

I can see what this book is trying to be. It’s trying to be a zany, funny collection of irreverent short stories, taking the grittiness of so many hunter stories we have out there and throwing in a heavy dose of the silly, sarcasm and general hilarity to make it a whole new thing. Still a little dark, with the heavy drinking protagonists and more than a few jokes, but comedic and silly – the slightly inept hunters flailing through a series of encounters with monsters and leaving (sort of) success and hilarity in their wake

I’ve seen this attempted before in other books – and I’ve utterly loved it. The horror and the humour, the grittiness and the silliness it can mesh so well and has literally created some of my favourite stories.

But… in this case it didn’t really achieve that. Mainly because I simply didn’t find it funny enough. I mean it was amusing and had moments of laughter, but there were nuggets within a story that as a bit meh. The thing is, without the hilarious quips and fun, this kind of story falls flat because there’s not much else there really to sell it

There is a story behind there. The origin story of Roy and him working for Miller, Suzie‘s father who then joined the firm. The two of them coming together, him resenting her, grudgingly starting to respect her and them moving their way down to romanceville. And I really loved how Suzie went from naive ingénue harder than Roy by the end. But this plot line and the world (which is more a series of random encounters than a world) aren’t really there for their own sake. I don’t think the author intends me to be super invested in these characters any more than I’m supposed to be super invested in characters from a comedy sketch. Nor do I think I’m meant to marvel at the world. These characters and this world is supposed to provide a good framework, a decent backlot, against which the hilarity can happen. But there isn’t enough hilarity so I’m left looking at the backlot a bit too much which is… fine, I guess. I mean, it’s not bad but not enough to sell it on its own.

The grittiness is actually pretty well done. The seediness of their lives, the heavy drinking, Miller succumbing to alcoholism, Roy clearly walking the same road, the grim darkness of it all isn’t bad – but, again, not enough.

Don’t get me wrong – there were definitely amusing moments. The haunted type-writer made me laugh. The werewolf and the vampire stories definitely amused me. The zombie was pretty hilarious. But the ballet dancer? Meh. The severed heads? Extra meh.

I think there may be a deeper, bleaker meaning here that may have gone over my head, the fact that so many of their stories ended without really helping anyone, the grimness, the silliness being almost more of a farce than actual humour may be a commentary on how truly desperate and ineffective they are – they’re flailing around, not actually fixing anything until their inevitable demise at the hands of copious amounts of booze… but that may just be me searching for something that isn’t there.

Diversitywise, the only POC I remember is a Japanese ghost and I do give kudos to the ghost being irritated by them addressing her in Japanese because they assumed she doesn’t speak English (she actually doesn’t speak Japanese). But she’s the only POC I can remember, there were no LGBTQ people and the depiction of women is shaky. We have a lot of complaints about Suzy’s whining and looking down on her. We also have some pretty dire storylines including the man driven to suicide by his three nagging ex-wives.

There’s also some weird stylistic choices. For some reason the book changes in places from standard prose to an almost screenplay format and I’ve no idea why. It’s like it’s mid editing and the author just wrote down the dialogue and didn’t get round to adding the “fred said” etc around it.