On the Edge, (The Edge Series #1) by Ilona Andrews 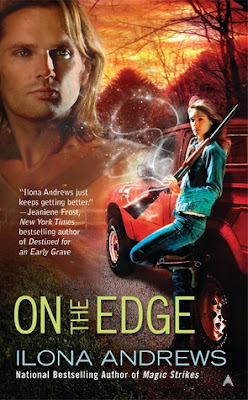 Living on the Edge, Rose lives very much between worlds, desperately trying to scrabble an existence while living between worlds and with scant resources.

Even her magic did little but make life more difficult – drawing her to far too much negative attention. The latest of which is Declan, magical aristocrat who has his own agenda and is definitely going to draft Rose into it.

While Declan is a problem, the beasts also moving into the Edge are a far more lethal threat demanding attention.

Another Ilona Andrews series, so much glee! Given some of the books I’ve been reading lately, I think I deserve this. Of course, I risked disappointment – but I’ve never read a book by Ilona Andrews I didn’t love. And this is no different

I love the world building of this. The whole concept of the three worlds – Earth (Broken), the magical world (the Weird), rich in magic and, clinging between the two, able to travel to each but not part of either, The Edge

The people of the Edge have magic, but rarely anything like enough magic to compare with The Weird. They eke a living on the edge of both realms, trading with both, working in the Broken without the resources that could access as full members of the society. They live on a tiny sliver of land with very little resources, desperately trying to scratch a living. And with magic – which is not always benevolent as curses and odd creatures can abound. For people on the very edge of their resources, the extra randomness that magic can bring just makes life even harder

This is really well shown with Rose’s siblings – George has the awesome power of reincarnation: except the cost of it and his compassion is killing him. It’s a terrible conflict – how do you tell a child not to care? While, a shapeshifter, doesn’t quite think like a human which Rose has to gently work round (which awesomely contrasts with yet more in depth and complicated world building from how The Weird treats their shapeshifters).

As ever with an Iona Andrews novel, we have a lot of detail – into how magic works, into the world building of both The Weird (I love their concept of how aristocracy as an almost meritocracy – it’s such an original little concept), into the politics and into the daily lives of the people of The Edge. There’s so much detail so well conveyed but none of it delivered via clumsy info dumping. We have so much here but none of it is delivered awkwardly or in a way that feels unnatural. It works, like it.

Rose’s story is also an excellent one. Her struggles raising her brothers. Her relationship with her grandmother. Her difficult childhood and parents (yes, she’s a semi-orphan and yes that’s a tired trope. I also don’t like how her mother was portrayed – it was sympathetic and surprisingly non-judgemental given her mother’s mental illness contributed to her sleeping with other women’s husbands, but it also served to really create Rose’s story of burden and sorrow rather than actually flesh her out into a character or person in her own right).

She has great power, but that makes her desirable and useful – it makes her a resource to exploit in a place that has few resources and fewer defences. People tried to kidnap her, force her to become a broodmare: she’s wary but she’s also young and actually wants a life. I like the conflict and complexity of her

I was extremely leery of romance in this book. Declan arrived on the scene and there’s a whole lot of coercion there. But the way it’s handled does an excellent job of breaking a lot of the tropes I hate when we see romances that involve “dubious consent.” There was a lot of effort to ensure that Rose’s own wants and desires were depicted and communicated while Rose herself was very careful to leave herself with protections and safeguards. Even when affection developed she never trusted him and I really appreciate that. I appreciate a protagonist who doesn’t throw caution and common sense to the wind because her heart and/or loins have spoken. Especially when they’re a protagonist on whom other people rely. Common sense and romance can exist at the same time! No, really!

The whole concept of The Edge zone is used to excellently depict class differences. People living in straddle worlds but straddling those worlds leaves them with very little opportunity. They have no legal existence in either world and not enough resources or structure in their own world to build more than the basics of their own society. They are incredibly vulnerable. On Broken they have few to no legal rights (something they often pay huge amounts of money for in order to get even the limited protection that legal existence brings them). The people of The Edge in general, and Rose specifically, work minimum wage jobs, often under the table and desperately try to scrape by. Rose’s poverty and the pain is causes her in raising her two younger brothers, the things she can’t provide them, the shortages they have and the constant worry and negotiation she has to live with as she juggles their scant resources and has to make hard choices with what they have

In the Edge, like many societies on the edge of government control, their communities have made their own laws and their own enforcement. Again, it’s not fair and it’s not well done – it’s cobbled together with the little they have, based heavily on community opinion and loose enough that people are definitely going to fall between the cracks. It’s an imperfect system and one Rose has to balance even as it hurts her, even if it means making hard choices

Declan also adds a new dimension to this, even with his good intentions he has so much more power (both in terms of magic and resources) over Rose and her family that they’re incredibly vulnerable to him. He continually forces his will on them, not out of malice, but because they’re so low on resources they can’t turn down his offer and their so vulnerable that risking his ire is dangerous (though Rose, does, frequently – even as she negotiates around his power) or simply because they know they can’t make the no fit. And even with the best will in the world, Declan often missteps. Not only does he misstep, in trying to help them he often makes the situation worse. This is an excellent little addition because it shows the consequences we often see in any marginalised people when privileged people decide to come in and play Saviour. Without bothering to listen to the people they want to help – even assuming they know better than the people they want to help and, in turn, making things far far worse for those people. They decide to help based on what they think they need to do – based on what they want to do – rather than what the marginalised people actually need.

It’s an excellent depiction. I wish the same attention had been given to more diversity. We have no LGBTQ characters, though homophobia is used by a nasty character to insult Rose (along with misogyny). It was clearly supposed to be wrong, but at the same time don’t use marginalised insults when you don’t bother to include the actual group in question. We have a few POC, but they are in relatively minor roles or ambiguous (and there’s a possible Native American character who definitely needs a lot more exploring as Rose assumes he is a White man faking a Native American heritage which is a deeply fraught and difficult discussion which needs far more development than one throwaway line can provide). We do have an interesting twist from the Weird, which is parallel Earth, where instead of Europeans invading North America, we had a greater Aztec empire raid Europe. Now we’re in the Weird I hope this will be further developed – but I doubt it because the empire did fall. I feel like there’s a big missed opportunity there to have a truly different twist and change the narrative of colonisation.

I’ve touched on it, but of course the writing is awesome, well paced, in depth with very real characters that left me completely addicted to them. Even ones we only saw briefly (I love Declan’s parents already). It was badly in need of more marginalised people – and this is one of those times when I almost don’t want to mention these criticisms because I just want to praise the awesomeness. Which is no less than I expect from Ilona Andrews