Let’s start where I am happiest – Kings Landing where Margaery is still praying and being pious and the perfect student and follower of the High Sparrow. And he’s even targeted Olenna. Olenna? OH IT IS ON!

I am growing steadily more uncomfortable by Margaery’s compliance until she hands Olenna a hidden note with the Tyrell rose on it. And Olenna smiles

I assume this is Tyrell code for “grandmother, I’m going to fuck these people over so epicly it will inspire songs and legends”. Because there is nothing more terrifying than Olenna smiling

In other women being awesome, we have Jon and Sansa trying to rally support: which isn’t going perfectly even if the child Lady Mormont is righteously fierce. They just don’t have enough men, even with Davos being inspiring, Sansa being passionate and Jon being super earnest and gathering the wildlings behind him

They march on Winterfell with a far too few troops – so Sansa steps up and starts writing letters. Who to? The Blackfish in the Riverlands? Or Littlefinger in the Vale?

Speaking of the Riverlands – Jaime has arrived with Bronn to take over the inept Fray siege of Riverrun. There’s lots of threatening the of Edmure their capture. And lots of The Blackfish responding with: 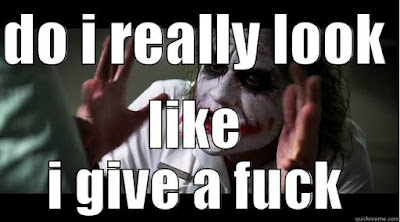 The last member of the Stark family isn’t doing so well – Arya is confidently ready to buy her way back to Westeros – but gets brutally stabbed by Nameless Trainer Girl. Arya really should have been prepared for this. She’s not dead – but she is badly injured

Time to catch up with Yara, Theon and a lot of naked women. Yara is desperate for her brother to step up, put himself back together. She clearly cares desperately about her brother – even if she is rough and ready about it as you’d expect an Iron Islander. She plans to go to Daenerys and hope Daenerys will just say “yay two people and a boat… how… great?”

But we do learn that Yara is attracted to women! Yes, Yara is a lesbian or bisexual woman, likes women and is happy to have her merry way with those naked set dressing. This means we have a living LGBT character where BEING LGBT is not the main or (in Lora’s case) only part of her characterisation. This is promising, promising enough I’m even not leaping on we have a heavily masculine coded LG woman – because we have Brienne is equally coded that way and she is most certainly straight

Oh shit she is so dead. What’s the Westerosi equivalent of a stray bullet?

Meanwhile we find Sandor Clegane, the Hound, is still alive! And he’s found a Septon who is willing to teach him redemption and peace and another way other than violence

Right… until everyone gets brutally murdered. Because this is Game of Thrones and twee redemption storylines do not happen here. Hell no.