The Awful Misogyny of the House of Night Series 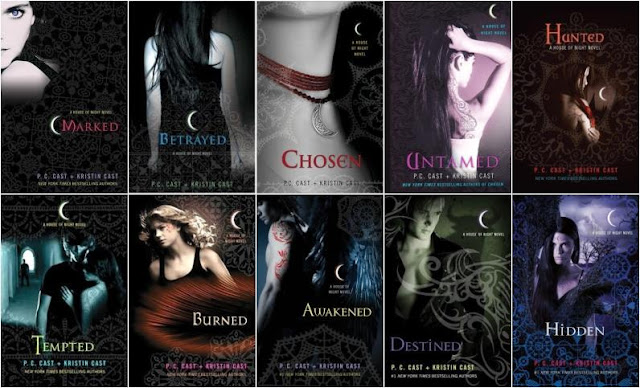 After many many weeks of unspeakable torment (for which Cyna (who did suffer along) and Mavrynthia and Merriska will face eternal condemnation for), I have finished the House of Night Series.

Over these weeks I have pointed out many many many, oh dear gods so many, problems with each of these books in my reviews. But with many of these long series the issues are not the individual books, even if the fuckwittery raised in those books was indeed beyond anything I anticipated, there are far more problems with the ongoing themes of the series as a whole

From the beginning the House of Night series tells us that vampire (or vampyre, since these books are so terrible that spelling flees them in terror) society is pro woman. It’s matriarchal, female led and everyone reveres a female deity. Femininity is revered and vampire society is vastly more advanced and forward thinking than terrible sexist human society


Because if this society is really all about the awesomes of women, it does a terrible job of conveying that to the actual characters - the actual female characters. Every book is absolutely overflowing in specifically anti-female language: slo, slut, hag; over and over again. They’re not just insulting others, it’s aimed specifically at women for being female - the main characters: Zoey, her Nerdherd and Aphrodite, display constant venomous derision for any woman they deem beneath them. This has to be the simplest step to creating an actual woman-honouring society: do not default to misogynist slurs every other sentence.


It’s no surprise that a pro-woman book that can’t even go a chapter without throwing sexist insults also has some other serious flaws in it’s oh-so-progressive matriarchal society. One glaring element is gender roles: which look pretty much exactly like our patriarchal society
Oh they have women in leadership positions, certainly (though it has to be said that, while we have characters like Thanatos and Sgiach manage to be powerful leaders for a brief period of time, we also have a whole lot of evil female leadership from Neferet and outright incompetent and pure absent leadership from the High Council. Honestly, the female leadership of Vampire society has not exactly covered itself in glory), but through the rest of society? We see female healers, female priestesses. We see as witches and spiritualists… we do not see them as warriors, as fighters. Those roles are firmly coded male.


This is reinforced from the very beginning of the series with teachers openly shaming a boy in class because he won’t be proper warrior to protect the womenfolk. That’s it, that’s his role, that’s his future - this isn’t his dream, this isn’t his ambition: this is his life as ordained by society. His one worthwhile role. This continues through to the last book where Eric Night, vaguely pointless antagonist, is duly shamed by the other men for not being a “warrior” until he steps up and insists on being a protector (whether he can or not isn’t actually addressed. He is a male vampire, he needs to protect and not doing so is a matter of shame)


This messaging is reinforced by her gurgliness, the Irritable Bowel Goddess, Nyx herself (in her endless interfering non-interference) gives out powers that reflect that. Women are prophets, seers and magicians. They have powers to talk to animals and heal. Men? They have powers with weapons - bows and swords. The exception is Damien - but this is less showing a diverse powerset and role of men in society and more a comment of the constant stereotyping that plagues the series’ most prominent gay character (and yes, there will be another post on that. Yes yes there will).


This is another terrible example of a society not just being prejudiced, but the objective reality of that world that reinforces and supports that prejudice. The sexist gender roles of the House of Night series are not just forced by a flawed and prejudiced society. They’re supported by the objective reality of the world: this is how things are in this world and these narrow gender roles are presented as progressive


This isn’t helped by the shallow world building - we have male characters with aggressive powers they can attack with - Stark, Dragon, even Aurox - but the elemental magic wielded by Zoey and her followers? Apparently not - the few times Zoey uses her magic to fight it’s to show her moral quandary and possible descent into evil. Only proper men get to use the gifts of Nyx to fight; a woman, even if she can literally throw fireballs from her hands, cannot possibly fight and needs to use the menfolk to protect her


And can we even look at this forced narrative of protection and ask exactly what they’re protecting them from? I mean, Kalona, the Ravenmockers et al are pretty recent things - the High Council of Useless Female Leaders had even forgotten the Big Bad Evil Cow existed (and some of them are literally over 500 years old). Why do they have this entire cadre of guards, a small army that makes up most of an entire gender when they don’t appear to actually have any enemies they need to fight against? They’re certainly not warring against humanity: Thanatos already makes it clear that the sheer number of humans out there would quickly overwhelm them (also because they’re using swords and bows. Never mind numbers, you could probably take out most Houses of Night with the contents of a some Texan’s basement armoury). And this is assuming the various nations of the world would tolerate the vampires having their own cosplaying army within their borders


Yes, I’m deviating off point a little (because the House of Night Series is just so bad that it’s hard to keep the criticism focused) but I think it’s necessary to point out that this enforced male-protector role is actually nonsensical within its own world building. It doesn’t exist to further the plot or advance the world - these warriors exist entirely to have these gender roles. That’s it.


That’s the society - but it only gets worse from here as we look at how this wonderfully matriarchal society treats female sexuality. It’s not pretty


In the House of Night series an openly sexual woman is a code for evil. If you want to know if we should hate a woman, just see how often she’s described as sexual, how often she flirts and how often the other women call her a “slut” or a “ho”.


This begins heavily in the first book with Aphrodite, the designated bad girl in the first book who is introduced giving a man oral sex. From the very beginning we know she’s evil and it just piles on from her - her sexy dancing, her “disturbingly sexy laugh” (what does that even mean?), her clothes and her constantly being derided as “slut” and “ho”. Even aside from the designated antagonist, any passing woman Zoey doesn’t like will also be similarly attacked and portrayed - her poor, barely appearing human friend faces Zoey’s awful contempt even before Zoey became a vampire - and was quickly demonised for her terrible sexual ways (going after Heath! One of Zoey’s men, the hussy!) Even Zoey’s sister, a woman we never meet, is known only by her terribad evil sexiness which Zoey promptly uses as a weapon to throw at her mother.


As the series progresses this just continues - sexual women are evil: even as Zoey is happy to line up a stable of men for bonus hypocrisy. Except the men pursue Zoey, of course which spares her from the worst of the slut shaming (though not entirely because even she worries about being a “slut” and “ho”) coupled with a heavy dose of Special Protagonist Sue (shared with friends boffing Raven Monsters… yes, really). In fact the sexual woman is used so much as an indicator of evil that you can use it to track someone’s descent. Seriously, we have Shaylin who can read people’s colours to see if they’re good or evil - when she could just tell by how many clothes they wear and whether they’re sexual! Look at Neferet - she was described as beautiful but never as overtly sexual in the first book… but let her turn to the dark side? The sexiness comes out! Not just that but when we look at Neferet’s origin story, her evil may be  due to her being kinky (or due to her being raped. Oh the power of choice where everything is so utterly terrible.)


Then there’s Erin - mindless clone of Shaunee without the melanin (so you can have a white girl play sassy Black woman because ye gods this series is awful) didn’t have enough character to be demonised for her sexuality in the early books. But she starts embracing the dark side and lo, she’s using her water powers for wet t-shirt contests and having sex with bad guys. It’s not even remotely subtle - you can see it in reverse as well. Aphrodite, she of the evil blow-job, joins team good guy and lo she becomes monogamous. Not only does she become monogamous, but her relationship is non sexual. Yep, when the bad women become good they also become CHASTE. Because the first sign of redemption for a woman is crossing those legs!


Even random minor characters like Becca and Venus, teeny tiny roles, are quickly and easily shamed and derided in many ways, especially through their sexuality. Because why characterise them when you just want to deride them ‘hos?


But while we’re on the subject of redemption - let’s look at how that relates to gender in this trainwreck of a series: see we have a lot of evil men joining team good guy. We have Raphaim, the murderous raven monster now happily in love with Stevie Rae and forgiven in a book. We have Aurox, the big murderous bull monster, forgiven in one book. We have Stark the fecking rapist who is forgiven in less than a book and becomes our protagonist’s main love interest. And we have Kalona - murderer, multiple multiple multiple brutal rapist that terrorised an entire people who is…. REDEEMED. And what does he do? Promise to be good? How quickly does Thanatos accept him as her warrior? No matter how many women a man rapes, Zoey and co are always ready to welcome them with open arms.
Women? It took several books before Aphrodite was tolerated by the Nerdherd - and that involved a lot of her playing mea culpa and admitting how terrible she was, being stripped of her vampireness and now having to endure agonising pain every time she has a vision. Yes she’s not exactly a nice person still, but considering the evil that the menfolk have been forgiven, her Redemption train has been an arduous crawl through broken glass.


No-one even tried to redeem Neferet. And despite Kalona being the evil rapist demigod, despite his dark whispers being influential in dragging her to the dark side - it’s ridiculous how quickly Neferet was depicted as the big bad who was manipulating poor poor Kalona.
We can probably sum up evil, redemption and gender in this series by considering that male rapists are constantly forgiven and redeemed - while female rape victims are demonised. And not just Neferet - we also had Becca, a bit character woman who was introduced for evil Stark to sexually assault: well Stark gets redeemed and Becca? She’s a terrible mean girl and she has a Mean Spirit.


And really, what more can I actually say to build on that? It’s so utterly terrible that anything else just becomes redundant.