Awakened (House of Night #8) by P.C. Cast and Kristin Cast 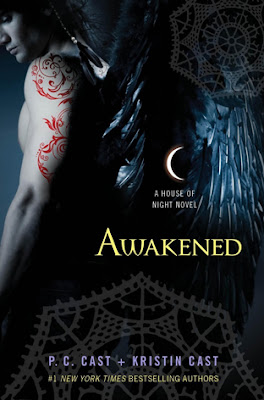 Zoey is taking a holiday to avoids all the drama and sad things that have afflicted everyone (but which makes her super sad because she’s so special). The bad guys are not respecting her wish for a happy holiday so Zoey will eventually have to get back into the action

Meanwhile the redemption of Rephraim continues, because what’s a little murder when you’ve decided a guy is going to be your freaky birdy love interest?

Zoey spends a lot of this book hanging out on the Isle of Skye-author-isn’t-quite-sure-about-the-difference-between-Ireland-and-Scotland-but-likes-guys-in-kilts (Scotland doesn’t use Euros) deciding she wants to take a time out because it’s all so sad and hard and everyone else tries to think of ways to get her back into the action. Also I’ve been to the Isle of Skye – it’s not just a made up place but the author has just overlaid the whole island and made it vampire world.

Y’know I’d be sympathetic – but the shit she’s been through is not any deeper or smellier than what everyone else has been through (hey, remember Dragon mourning his wife of several centuries? Or Aphrodite changing species? Or Stevie-Rae and the Fledglings dying and coming back? Remember any of this?) and none of them had their soul shattered and then decided to take a prolonged island holiday. This follows book after book after book of everyone worshipping Zoey and centring her grief to the complete exclusion of everyone else’s. Stark’s death? All about Zoey. Stevie-Rae’s death? All about Zoey. Heath’s death? All about Zoey. Has anyone even told Heath’s parents yet? Anyone? Having an all-about-Zoey holiday so she can be all schmoopy with Stark the Redeemed Rapist and have a whole new set of vampires declare how super duper awesome she is just causes migraines.

And that’s ignoring the multiple prophecies all saying that if she doesn’t get her arse back into gear then the whole world is going to fall apart. No, screw prophecies, that is with her KNOWING Neferet is out there doing terribad awful things, but hey time out holiday time because precious Zoey!

Yet that’s basically what Rephaim does. As we all saw coming (with the inevitability of a train racing towards us while we’re tied to the tracks), Rephaim loves Stevie Rae (and she has a thing for bird guys) and that means all is good! Nyx even totally comes to seal the deal!

And, no, angst is NOT Redemption. Whining away that you’re a monster is self-absorbed self-pity, not redemption.

If I were the Dragon I wouldn’t forgive this bullshit either – “you’re sorry and have to have downtime when your girlfriend’s asleep anyway? Totally makes up for murdering my wife!”

(Oh and a side point on his - Rephaim continually beats himself up as a monster, as a "child of rape" - there is actually more shaming and attacking of Rephaim for being conceived through rape than there is of Kalona and Stark, actual rapists).

This is another really nasty problem House of Night series has – not just speeding people down the Redemption lines at a great rate of knots, but we also have this cult of forgiveness. These people (no, not people – men and I’ll come back to that as well) do terrible things and suddenly BING REDEMPTION and everyone is now expected to forgive them. Their misdeeds totally forgotten. The fact that Dragon doesn’t want to forgive Rephaim, the man who killed his wife, just days after she died (seriously, the ashes can’t even be scattered yet!) and doesn’t want Rephaim around him is seen as Dragon’s failing rather than completely natural. But we’ve seen the same thing with Stark before as well – absolutely no-one brings up his Red-Fledgling Rapist days and his victim has been thoroughly demonised.

Which makes me fear that we’re also looming closer to the biggie – the redemption of Kalona! Because he’s super duper sad (though can we shred hi “motivation” – he turned evil because Nyx friend-zoned him. Nyx wasn’t into you, she already had a guy Kalona, deal with it) and Neferet is being so very very mean to him and she’s the real bad guy! And look, he even let Rephaim switch sides! I shudder, but the more Neferet is demonised and the more we seem to be cutting Kalona some slack the more I can see this happening.

Because that is what this series wants – a female villain. Nothing about how Neferet is written suggests the slightest attempt at a redemption storyline for her. No way. She is evil evil evil through and through, embracing the darkness, kicking puppies and generally being universally awful. She’s also sexual and gets naked a lot because SEXY WOMAN IS EVIL IT IS KNOWN!

I’m going to have another rant about Nyx here – because she appears again and strongly hints to everyone that Neferet is totally not good. Y’know she could have done this several books ago or done it in front of the High Council or in front of any of the vampires who still think Neferet is a good guy – but nooooo. So she appears, tells everyone that Neferet isn’t all good, but mainly focuses on ramming forgiveness down Dragon’s throat. When she’s gone Neferet just mind controls everyone into believing her again with DARKNESS POWERS and Nyx does…. Nothing. Of course she does nothing. This series needs to make up its mind. Either Nyx decides free will means she can’t get involved at all – in which case she needs to stop throwing out prophecies and random appearances and squelching stomach cramps of guidance. OR she is an involved deity actively guiding, supporting and helping her supplicants – in which case she needs to get up a little earlier in the morning and getting her lazy deity arse in gear.

If she can’t/won’t interfere then fine. If she isn’t powerful enough to interfere, then fine go with that. If something’s stopping her interfering except in a few short bursts, great we’ll run with that, but explain it. But having her apparently able to do so much but just choosing not to just screams terrible writing with her being dropped in whenever the plot requires her, then disappearing to try and preserve some possibility of their being a plot. At best it makes her look not just incompetent, but flaky and inconsistent – at worst it makes her look like some kind of cruel trickster deity enjoying tormenting her minions.

Honestly, it makes me sympathise with the bad guys. As Cyna put it, Neferet’s probably sick of Nyx’s shit.

Now for something even more awful

Since the very first book of this series, I’ve repeatedly pointed out how utterly awful the depicting of gay characters has been. It’s been stereotyped, with repeated use of slurs, horrendous tropes, gratuitous Gay Sharking, no-homo female-vampire feeding and generally some of the most offensively homophobic depictions I’ve seen for a very very long time. From over-sensitive gay men, to gay squeals and gay interior design and wrapping, lots of misgendering (because gay men must be presented as women) and squealing and crying and generally being the epitome of an offensive caricature. Seriously:
“gay boy”,
“fluttery gay”,
“gay snot,”
“burst his little pink bubble,”
“burst into snotty tears and ruin his make up,”
“if he tries to hang rainbows and unicorns everywhere and make all of us wear feather boas”
“I’m going for a jog, a chubby gay is not a happy gay,”
“gay that you know that”
“Damien is too much of a lady,”
“you can’t wear that, you’re lighting the funeral pyre of  gay.”
“he’s probably frolicking gaily,”

These are just SOME of the lines from this one book – and this is not especially worse than any of the previous homophobic messes.

So the fact this book has the dedication:

Dedicate this book to LGBT teens
Gender preference does not define you.
Your spirit defines you.
It gets better
We heart you.

(Really? Gender preference? Does anyone remotely think that’s the correct term) would be pretty damn galling just on the basis of these stereotypes. But this dedication is included in a book that not only contains more gross homophobic caricatures than a Chick tract, but it’s also the book where Jack, one of the two gay characters, is killed off. Not for any particular useful story purpose (not that he ever served a story purpose), he’s just killed off for angst sake. He's killed off while singing a song from GLEE. Ye gods why does anyone think this is ok?! Including this dedication in any House of Night book would have been disgusting given the homophobia – expressly including it in a book containing gaydeath? I have no words to cover the outrage of this – rubbing salt into wounds doesn’t even come close to covering it.

This book is disgustingly homophobic, but it’s far from the only offensive shit in there. The POC continue to have utterly tiny roles. Shaunee has fallen out of the book except when she’s needed to be sassy. Kramisha just runs after Stevie Rae begging to serve, begging to be her confidant, begging to help her and constantly being frozen out. But being an underused, begging extra and GBF wannabe isn’t enough we have plenty of racism as well – including: “She’s black. Shadows are black – hence the reason we didn’t see her.” No really

Oh and Aphrodite, the straight white girl, claims to be the biggest minority. So. Much. Awful.

Let’s also hit this terrible idea of what “Matriarchy” is. Cyna has done an excellent job of really ripping into how terrible this is because it truly is awful. We’ve been told from the beginning that this is a martriarchal society – but from the beginning we’ve also had epic amounts of anti-woman slut shaming, constant anti-female slurs (bitch, ho, slut, hag) and now, with the happy isle of Skye, lots of using “female” as a pejorative meaning weak. For a matriarchal society, it seems to carry every last bit of sexist, misogynist nonsense as our patriarchy.

On top of that we have a monumentally rigid gender-binary. Men have a role. Women have a role. Never will you cross that line. Masculine and feminine are extremely separated and any one who comes close to crossing that line constantly has their femininity or masculinity reaffirmed repeatedly over and over because LINES MUST NOT CROSS. This is all made far worse by the whole bullshit myth (literally). See the current vampire society is all helpless and incapable of fighting the darkness or knowing anything about the bulls because MATRIARCHY. They’re totally unbalanced because of lack of maleness and those terrible womenfolk dominating everything, terribad females! Everything fails because womenfolk who can’t even think about conflict, oh their precious femininity! Womenfolk can’t even REMEMBER evil because conflict goes against their femaleness.

Even the attempts to do things which are almost good – like Neferet telling a man she decides who gets to touch her – just comes across as more of her arrogant awful femaleness – all part of the whole desperate urge to make a terribad female villain and redeem as many of the men as possible.

House of Night plumbing the depths of awful again and again.