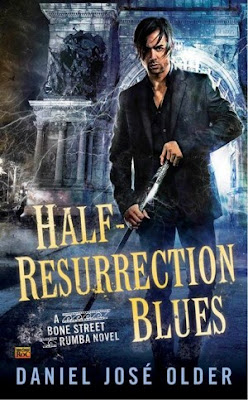 Carlos is an Inbetweener, the only one he knows – a man not entirely dead nor entirely alive and a definite asset to the New York City Council of the Dead. Though not usually a happy one

But one of their jobs for him introduces him to others like him. Which would be easier to celebrate if he hadn’t just killed one of them, Trevor, which official Complicates his attempted relationship with Sasha, his surviving sister.

I am in two minds about the voice in this book – I don’t particularly like it or find it very natural or flowing and it doesn’t draw me in. But it does really work towards the theme and atmosphere of the book – the sense of place and the characters themselves. So I both don’t particularly like it but also appreciate the skill with which it is written and what it adds to the overall book.

I really love the world setting here –it’s dark, it’s gritty and it is extremely original. We have a world of ghosts, it’s grim and gritty but with nice moments of humour to stop it being overwhelmingly dark. It’s hard to have a nicely grim setting while having regular humour as wall – and this book nails it.

But it’s also really original and not something I’ve seen elsewhere. The nature of ghosts (and their organisation which I an excellent skewering of bureaucracy everywhere), the different kinds of ghosts, the drawing on of different belief systems, the portrayal of the underworld are all excellent, different and would have me coming back to this series for sheer novelty value if nothing else. And it all works well with Carlos and the odd place he occupies as an Inbetweener, a man who is dead and alive, able to be one with the dead but still moving around in an almost dead body.

Carlos himself is also an interesting developed character, more than just an agent of the bureaucracy and more than just a hard bitten, bitter operative, all jaded and sad. He has friends, he has interests - he’s very well read and that also informs his character as much as his jadedness, his friendships and his snark.

The story itself works as an excellent mystery because we often don’t have answers - but that very slow discovery of what is happening is an excellent vehicle with which to introduce the actual world setting, the characters and how everyone fits in it. The pacing works and leads us to more and more new and fascinating concepts in this world though I do think there’s a shaky moment in the middle were it becomes more than a little wobbly and I’m not sure where the book I going from there

It also has a lot of excellent commentary on various topics including light skinned POC being perceived as white and gentrification of POC neighbourhoods. Nearly all of the characters are POC (including the protagonist who is Puerto Rican, Sasha who is a Black woman, Mother Esther and most of the rest of the cast). We not only have a large number of POC but they often go into more detail than just “this person is Black”, from a Native American lawyer discussing passing issues, to a Haitian doctor, a Brazillian ghost and so many more.

The whole huge racial and ethnic diversity of Brooklyn feels very much included on the page, people from a variety of backgrounds are all present, and more than as a passing description to be quickly passed over.

There are some problematic throwaway comments (comparing the world of the dead to a Third world country). There’s also Carlos’ disability – he walks with a pronounced limp and once when he doesn’t have a cane he has trouble walking – but that feels almost belatedly remembered. Before that point I actually thought the cane was only there to help him conceal his sword.

When it comes to women we have some great characters but also characters who are very much trope-laden archetypes. Like Sasha, she’s an interesting character, clearly very skilled and capable and with her own difficult history as another Inbetween person with no history of her origins trying to find out what happened to her and her missing brother and even having access to a network of people like her. She’s involved with the big bad in a nicely complicated way… and from the moment Carlos learns about her she’s firmly put in the love interest box. We have brief worries about her brother and the angst that comes with that to say nothing of her big bad involvement, but the intense focus is on her as a love interest. The minute he learns about her he doesn’t consider if they can find answers to their mutual unusual origins, or finding someone who understands the life he lives (or unlives) nor is he even interested in the network of fellows she has created (especially with his own disillusionment with the ghostly establishment) – his first and predominant thought is having sex with her. Which is doubly problematic when we consider that he’s just killed her brother and hiding that from her while he makes a b-line to getting in her pants. Sadly, Carlos’s constant sexual focus on Sasha was the main barrier to be enjoying this book.

We also have Mother Esther she’s also a powerful character and deeply interwoven with this world’s fascinating twists and original concepts. She’s knowledgeable, independent and an interesting counterpoint to the stuffy, inefficient and maddening bureaucracy of the ghostly establishment. But she’s also an overwhelming mother/nurturer figure there to play kind, wise, healing mama to Carlos. Like Sasha, she is involved in other things and she has the power to be a lot more – but this trope, this archetype, is her overwhelming definition.

There are other women who have relatively minor roles but I hope will definitely pick up – Kia and Dr. Tijou but I’m more looking for their potential developing than praising what they are now.

We have two LGBT characters but they are pretty minor – one just appeared for a rather clumsy Native American speech that didn’t exactly smoothly fit the plot (and it’s kind of all his character exists for). The other is a Santero who provides doctor’s service and research which is pretty much what he’s there for. Both characters have potential to be more, but at the moment they’re one note and one only appears when useful.

With the huge amount of racial diversity, more than a nod at analysis, a very complicated and layered main character and a world setting that is completely original and begs to be explored, this is definitely a series I’m going to keep following.