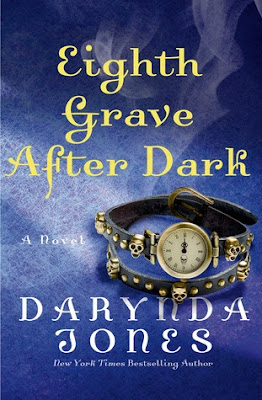 Charley is heavily pregnant and ready to give birth any day now to Beep, the prophesised daughter who will save the world. Until then she has to hide in their new home on hallowed ground so the 12 Hellhounds don’t find her and kill her

Confining Charley is… an interesting experience for everyone. Especially since Reyes is definitely up to something in the name of her protection

Not that she’s bored in her hideout. She has weddings to arrange, a case to solve, an evil stepmother who keeps visiting and a whole lot of prophecies to make sense of

This is when we finally delve into truly what Charley is – as we’ve been threatening and nearly achieved in the last book. Here Charley is finally approaching her full power, she’s mighty, she’s strong, she’s terrifying. She’s also pregnant and finally giving birth to the much anticipated Beep, revealing the truth to many of the prophecies they’ve been agonising over for so long. We even have an appearance of the ultra-big-bad, Reyes’s dad, Satan himself. We even, finally, get an explanation for Mr. Wong.

In short, a lot of the storylines which have been brewing pretty much since the first book all come to fruition. On top of that we have ongoing stories of Charley and her much hated step-mother kind of had some kind of rapprochement and her murdered dad’s ghost drops in to be cryptic about something involving the Vatican. Oh and Cookie got married. There’s also

Then we have an actual case from Special Agent Kit and her friend who want to recruit Charley despite her inability to leave her new monastery home because of the 12 hellhounds. On top of that there’s also a ghostly nun with a story to tell as well.

Or, to put it another way –ye gods there’s a lot happening in this book! Honestly, there’s perhaps a bit too much happening in this book. So many plot lines, some of the could really have waited to the next book while we digest the vastness of the prophecy and what Charley is and the amazing new directions and revelations of this book (though, honestly, I think the whole revelation about the twelve is… contrived and unlikely and smells a lot like a retcon).

Despite the vast fullness of this book, I can’t say it was difficult to follow – just that many elements would be better of developing rather than having so many tangents – just a little more digesting of the vastness rather than piling on more and more and more and more. It’s a problem the books have always had – trying to do far too much in each book and this time it took it to eleven.

But I could follow it all, it was fun – and finally we’re moving forwards with so many revelations and epicness which I really have been looking forward to for so long. Sure the ending means I think I’m going to be immensely frustrated by the next book, but still I read this book with utter glee that we’re finally getting some revelations

Ending aside, I also like how they worked in Charley’s new super powers while still making it clear she has vulnerabilities and isn’t completely unassailable. There was a nice moment in the book that made it clear that even a god like Charley has her limits – which can always be a major problem with a super-powerful character. But what I didn’t like was that this vulnerability required Reyes to save Charley. Yet Again. It doesn’t help that he still tries to keep things from her in the name of protecting her (but, equally, she does the same which is some parity – except he actually has the gall to be put out by her secret keeping) and while he isn’t overpowering her and threatening her as is a constant thread throughout the series (because she’s far too powerful for that), I’m not sure if this is him finally learning some respect for her or her simply being too powerful for him to abuse that way any more. I don’t think I will ever like this character and it’s certainly not a sign of improvement if he only stops controlling her because she becomes too powerful to control.

What I do like is how angry she was repeatedly about how much Reyes is taking control and generally having so little faith in her. It’s true Charley is a very very very very silly person (hilariously so half the time) but his “protectiveness” so often comes with a complete lack of respect for her skills, abilities or basic competence that it’s nice to see her object so fiercely to the disrespect of it.

Happily the other thing that I really really like about this series continues – the fun, the humour, the sheer hilarity of this cast working together, interacting together and bouncing off each other is a joy to read. Cookie and Charley in particular are just such amazing fun to read. Honestly I could read a whole book of them going about their daily lives doing their silly silly things.

The book has a number of excellent female characters – Charley and Cookie and Agent Kit and Amber, Charley’s daughter are all extremely awesome. We also have nice visits from Charley’s sister as well – they’re all excellent (and immensely fun) characters and all put up with Charley in very different ways.

What I don’t like is how her sister, the therapist, continually tries to push Charley to forgive her stepmother (who is increasingly revealed to be abusive). She continually talks about how it would be good for their stepmother which is probably understandable given the family relationship but there’s not a lot of challenge to it, especially as she’s a therapist. We have a culture that places a toxic duty of forgiveness on abuse victims which is victimising and unhealthy. Charley isn’t suffering because of her lack of forgiveness for her stepmother, nor is she tortured or having problems – she is quite happy to live a life without her stepmother in it, something she’s very able to do now her dad is dead. Charley, the abuse victim, does not benefit even slightly from forgiving her stepmother – but she has this huge pressure all the time to listen to her, understand her forgive her and generally make nice. This cult of forgiveness has gone unchallenged for far too long.

We have Quentin hanging around, he isn’t a major character but he does recur quite often and is clearly part of the gang now. He is Deaf and considered sexual and attractive (it is common for disabled people to be de-sexed, it’s nice to see Quentin be an attractive teenaged boy whose lack of hearing doesn’t make him anything but that) and he has woo-woo – but it is not connected to his disability (how many blind people who see visions etc do we see in fiction?). I also like how Charley, and her supernatural ability to understand all languages, extends to ASL.

We have some POC – Reyes is, of course, Latino as are his birth parents. Even having spent time in prison he is lacking the usual gang stereotypes that go with it (he’s awful for very different reasons). Angel, Charley’s ghostly assistant is also Latino who did have those stereotypes in a previous book which have been nicely challenged with his surprising back story. Garrett is Black, he’s a relatively minor presence in this book and he’s circling a voudou storyline that I’m watching with wariness to see how it develops

We have a number of minor POC as well – a Native American neighbour, a Middle Eastern doctor, Reyes’s friends – and Agent Kit’s fellow FBI Agent Waters is also a POC – though problematically described as “exotic”.

There are a number of POC here but I think, with the exception of Reyes, they don’t have super prominent roles compared to, say, Cookie, Osh, Amber and Uncle Bob. Garrett is probably the closest after Reyes, though Reyes is the second most prominent character

There are, again, no LGBT characters – but we do have a pretty unpleasant moment with Charley fetishising a man kissing another man (for soul eating purposes) which is always gross (don’t fetishise marginalised people, it’s reductive and creepy) and doubly so in a series that has had so little LGBT inclusion

I loved this book but I’m almost not looking forward to the next one. We’re all set up for a whole new chapter in Charley’s life – a really dramatic one with a completely new path…. But it ended in a way that suggests the next book is going to take some very quick, abrupt steps back from all of that which I think will frustrate me a lot.