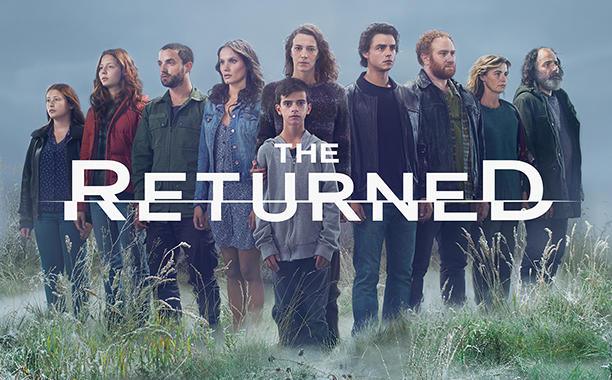 A new season of Returned comes with a lot of ominous, beautiful imagery and spooky music. This show has always been more about the theme and feel far more than the actual details of what happened. I would say it fits into the category of an eternal mystery show, except I think the theme and feel are the point, not the mystery.
Season 2 opens 6 months after the last season ended with flood and a horde of newly returned. The authorities have moved into town with a lot of soldiers and a new investigator called Berg but they only know about the flood – few of the locals are talking about the undead (for obvious reasons). They know the locals aren’t telling them everything, and it’s all kind of ominous and spooky.
Of course, a lot of the locals have left after the flood which has still left large amounts of the town under water
Jérôme and his daughter Léna are still around – but there’s a lot of tension between them. Jérôme seems to be the only guy telling the truth so is largely considered a liar. All they get from everyone else is ominous mentions of “thieves” and absolutely no bodies being found
Neither of them are fans of Pierre who is also still going – running the Helping Hand and making it look more and more like a very spooky cult. Pierre’s also recruited Frédérick, Léna’s ex. They’re still very culty.
Adèle is also still in town and heavily pregnant with Simon’s child. This is causing her all kinds of angst, including her daughter, Chloe, wondering if the baby will be a zombie or not and Adèle generally being in a terrible state, not seeing a doctor and repeatedly trying to abort her baby. Something she confides in her closest confidant – a Catholic Priest. Well that’s quite possibly the worst choice but I’m, impressed.
Then Toni returns. Or possibly Returns. Last season Toni drown in the lake but death isn’t that much of a problem on this show. He’s now back – in time to be hit by a car (driven by Berg) and taken to the hospital – where he cause quite a stir among everyone because he’s supposed to be dead.
Another return is Audrey – she seems to have been on the same bus as Camille in season 1 and has just returned, much to the consternation of the local military. One of those soldiers tries to take her home – which isn’t there any more. Instead he wants to take her to where new people have settled.
Only the road has disappeared. Yes, the road has vanished (something Adele also discovered trying to go to the hospital) which worries everyone, especially Audrey who now has this strange soldier guy saying he’d take her to safety and instead  drove into the woods in the middle of the night. She’s duly suspicious and decides to run away into the woods. There she finds a zombie eating someone and someone else, presumably a Returned, taking her by raft to a little community across the lake
I’m going to assume everyone here is Returned since Audrey is taken to Camille and Claire – who are worried about “them” hearing them. I’m not sure who “them” are but it’s probably not a good thing.
Possibly in the undead community (or not, it’s not entirely clear) there’s also Simon (still stalking Adele and Chloe) with a woman who talks ominously about the return happening again hich is all connected to Adele’s scary scary baby
We also see Serge (the serial killer) and his mother – and Julie and the ever-so-creepy Victor also drawing creepy creepy pictures of, I assume, Adèle’s creepy creepy baby. His mother returns – that’s going to be complicated
So, lots of creepiness and lots of questions – but I expect nothing less from The Returned.