Destined (House of Night #9) by P.C Cast and Kristin Cast 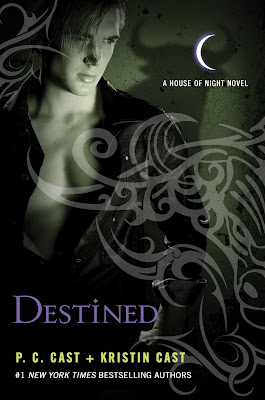 With ties of family and honour, Dragon and Kalona face hard choices: while the new being Aurox must decide exactly what he is.

Time to open another bottle of the Good Booze because it’s another House of Night review (or, as I’ve come to think of it, my penance for the terrible evil I must have committed in a former life).

The first point that struck me about this book was that I realised why Zoey’s mother died last episode – because Jack and Anastasia died. These two deaths could never ever be about Zoey. Even after a series of making everything about Zoey, this was too much a stretch. So Zoey’s mother died – and the other deaths are pushed quickly into the background. Damian gets to be occasionally “soggy” but now all deaths are eclipsed because now we have Zoey pain to focus on

I have ranted about this in so many books but the redemption/forgiveness themes in this series are truly and utterly awful.

Take Dragon. Dragon’s wife of several centuries was murdered by Rephaim the bird boy who was magically redeemed last book. Dragon is incessantly shamed and demonised in this book because this terribad evil man will not forgive his wife’s murderer when said wife’s ashes are not even cold. The idea that Rephaim should stay away from school and give this poor man a little space so he wouldn’t have to see his wife’s murderer every day (it’s not like he’d lose out on an education – this school has a terrible curriculum and Rephaim himself is over a thousand years old so how much of a high school education does he need?) is considered outrageous. Rephaim’s desire to experience life as a “normal teenaged life” outweigh’s Dragon’s soul crushing grief

Which, again, is presented as a terrible character flaw. Dragon is losing himself, losing his way – and no-one (not Thanatos and certainly not the useless goddess Nyx) bothers to do anything to try and comfort this grieving man. No they talk about how terribad he’s becoming, how he has to forgive and play nice with Rephaim. And it’s only made worse by the ending and what Dragon has to do to redeem himself. Yes he has to redeem himself

Yes spoilers, scroll over to reveal: Dragon dies, sacrifices himself to protect Rephaim. That is his “redemption” for grieving for his wife – protecting his wife’s murderer at the cost of his own life. This is what redemption looks like in this series – a man shamed for not forgiving his wife killer having to then martyr himself for that murderer.

On top of that we throw in the joy of Becca (remember her? She’s the woman who Stark tried to rape) being even further demonised because she has a “Mean Spirit”. Y’know, even if Becca is a reincarnation of Hitler, it STILL wouldn’t make it ok for Stark to try and rape her – stop trying with this demonising, sex shaming bllshit.

But now we have the utter culmination of redemption – I said it was coming and here it is. Kalona ended this book as team good guy. Yes, Neferet is the biggest of big bads (because we all knew we were going for a female villain) and Kalona, the evil, raping, murdering Kalona, is now being brought back into the fold.

Because of a great big act of redemption? Hah, no, of course not. Like Stark and Rephaim, he did nothing to actually earn his redemption – he’s just declared Redeemed. Yay good guy, everyone forget the victims (who, you’ll note with all three of these men, the victims were primarily female) and embrace them.

There is not enough booze in the world.

I am going to do something astonishing and actually say something positive about House of Night. Hey, maybe that booze is stronger than I thought!

But in this book we have Shaunee, one of the mind numbing Twins, finally deciding to grow a personality. Yes we have actually issues, an actual opinion and background and some attempt to actually make her into a human. I appreciate that, it’s past time and I love that she’s finally growing and developing. So yay!

Except… well look at this? I’m praising a series for finally developing a character in book nine of the series? Damn that’s some mighty low expectations! I also have to note than when Shaunee sees Erin ditching her as a shallow fashion accessory and latching onto Kramisha, another black woman, she’s very very very quick to assure us it’s totally not about Race. Honest. Because that might mean looking a little more intelligently and deeply

But then, does anyone actually want to see House of Night trying to do a serious storyline about racism? Really?

Now, as I’ve said in every past review, these books are full of misogyny, racism and homophobia. And this continues – the sexual woman is evil (and Neferet is now having sex with a bull, yes an actual cow because-evil-sex-pervert), Damian is still disparaged as “queen damian” with a “man purse” etc etc and Zoey’s Native American heritage is used entirely for woo-woo. They’ve also had frequent forays into ableism by having a gazillion characters use the word r@tard over and over. Seriously everyone does this and now and then we’ll get someone (usually Stevie Ray) say “hey that’s mean!”. Then they’ll just do it again. It’s like when a celeb says something terrible and then tweets a non-pology and we’re supposed to just forget it. Only they then do it again and again and again. I think Zoe objects to mild curse words more than they object to an ableist slur

Anyway, the authors looked back at the series to date and seemed to think they hadn’t included nearly enough terrible anti-disabled trope. Firstly the gang are now being bused to school. And what do they call this bus? “The Short Bus.” Yes, of course they do, and they have many slurs and contemptuous statements about this bus. Over and over. Seriously, in a world setting where the headmistress of the school is shagging evil cattle and sacrificing people for more evilness, they manage to spend a ridiculous amount of time being complete awful over the “short bus.”

Then we have new character Shaylin. She was blind. Note the past tense because the minute she becomes a vampire she is “cured” and can see. Not only can she see, but she gets super-duper soul vision. Yes an ex-blind character with super vision powers is a ridiculously common trope. And disabled characters who are magically cured is even more of an annoyingly common trope – because actually having a disabled character is deemed too difficult to write.

But hold on, it gets worse! See from the very first book it’s been established that vampires have to be physically healthy and even beautiful and if fledglings are less than ideal they end up dying (and resurrecting as Red Fledglings now). There’s an ongoing eugenic-y sense that vampires have to be so physically perfect. So, Shaylin becomes a vampire – and she becomes a Red Fledgling. Why? Because her blindness meant she was “broken”: so she’s automatically shunted into Red Fledglinghood where failed blue fledglings go because she was PRE-FAILED by her disability

And lo, the House of Night manages to increase its awfulness yet further. Who thought they could manage to plunge even further?!

I suppose I should end by talking about the plot where… where… um…. Well…  I’m sure there was some. Right?