The Originals, Season Three, Episode Ten: A Ghost Along the Mississippi 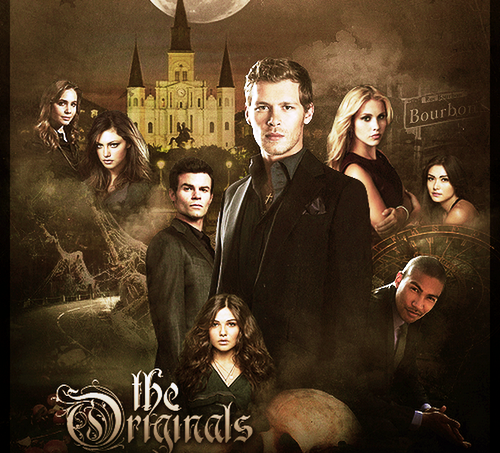 Klaus freaks out over what he believes is Cami's dead body.  As it turns out, Aurora compelled Cami to drink her blood the moment she was sure that Klaus was in love with her and then slit her throat. Klaus immediately wants Cami to feed and become a vampire but Cami worries about what she will become and decides that she would rather die as a human than become a vampire. As you might well expect, this triggers a large amount of angst in Klaus. Cami however is worried about her dark side. If you recall, a few episodes ago we were informed that Cami beat the shit out of a guy who had abused her friend.  I'm sorry, I fail to see how this is a dark side.  Men who beat women engender no sympathy from me.

Klaus doesn't have time to dwell in his manpain however because Tristan has had Hayley and Jackson kidnapped. Here's the deal, I know that Hayley is a young hybrid, but she is still a hybrid. Is there ever going to come a time when we see her kick some major ass and not be so incompetent? Don't give me any crap about overwhelming numbers because we have seen Klaus surrounded by far more vampires that than an emerge victorious.  It seems that weak is how The Originals likes its female cast members.  In vengeance for torturing him, Tristan rips out Jackson's heart to cause Hayley pain. Bye Jackson, though you were never really much of a character and while Hayley may have loved you, she obviously loves Elijah more and honestly, who could blame her.

Tristan now has the upper hand but we all know that cannot last. The solution to the problem is to capture the drugged Aurora ,who is being driven out of town at Tristan's behest.  Now that the Originals have some leverage, they arrange a meeting with Tristan and the Stryx.

Freya decides to free Cami from the circle that she had her trapped in.  Cami is thankful for being given a choice as to whether to live or die.  Freya however has plans for Cami.  Channeling Vincent's power, the two witches get to work.

At the meeting site, Tristan brings along Hayley, who has heavy doses of wolfsbane coursing through her system.  Tristan however refuses to hand over Hayley until he gets Aurora.  To that end, Tristan enters the shipping container where Aurora is being held. Aurora stands and hugs her brother and then slips the saratura  out of his pocket.  Aurora then slams the saratura on the wall and walks out of the container.  Tristan is aghast and then the trick is reveals, he wasn't dealing with Aurora but Cami, who was magically changed to look like Aurora.  Being neither living or dead, Cami was able to leave the shipping container but Tristan cannot. Also, total props to Leah Pipes for being able to walk in those shoes without breaking something important.

The Stryx prepare to attack on Tristan's command but Elijah talks them down suggesting it would be foolish to die for Tristan and that he made up the prophecy.  It's Marcel who also suggests that it would be pointless to waste anymore of their people. Aya sees the sense in this and says her goodbyes to Tristan.

It's time for a few last words with Tristan, and it's Elijah who informs Tristan that he will rot forever as the bottom of the ocean.  This is fitting given that Aurora and Tristan had Rebekah placed in the sea before the mid season break. Hayley is the one who closes the door on the shipping container, telling Tristan to remember her face because it is the last face that he will see.   Wait. This is the great vengeance that she promised Jackson - closing the door. Wow. I wonder if Hayley is ever going to acknowledge that she didn't really exact vengeance because Tristan is being punished for stepping outside of his lane and not for killing Jackson.  Vengeance for Jackson is merely a minute side benefit. Oh well, I suppose we all knew that there was never any real hope of Hayley kicking some ass.

Job done, Cami starts to leave and once again Klaus begs her not to leave him.  Cami however is adamant that this is not about him. Cami walks off and Elijah intervenes and tells Klaus that he has to let Cami make her own choices. Right, like we all don't know already what Cami is going to do. With Jackson dead, that's their limit for killing people close to The Originals per episode.

In the bayou, preparations are underway for Jackson's Viking funeral. Anyone else find it at all weird that werewolves are set on fire and then sailed down the river?  How does that tradition even make any kind of sense? Was it a werewolf tradition that the Vikings stole?  Anyway, after being told that it's time by Elijah, it's Hayley who does the job.  I wonder how long they are going to have Hayley mourn before she hops into bed with Elijah?  We all know that Jackson's death lifted the only impediment keeping them apart.


Klaus returns home to find that Aurora gone.  He argues with Freya about Aurora's escape.  Freya assures Klaus that only another strong witch or someone with a strong magical implement could have freed Aurora.  Klaus then realises that the only person it could have been is Lucien because Lucien is the only one who still cares about Aurora.

Cami meets with Vincent at her brother's tomb.  Cami has begun to talk herself into becoming a vampire, arguing that she did a good job today and would be able to continue to do so for the people of New Orleans if she became a vampire.  Vincent checks to ensure that Cami means this and offers up her blood. Gotta love how Julie Plec cannot stop having her vampires feed off of Black people. It really is a thing in this universe.  Black people must taste particularly good.

Elijah heads to see Marcel, who swears that if he knew Hayley was going to be kidnapped that he would have warned the Mikaelsons.  The two share a drink and reaffirm their friendship.  I guess that means that at least for now, Marcel is in the clear for the limited role he played.

Cami has made herself comfortable in the Mikaelson compound and downed all of their blood.  Klaus is so thrilled to see her, he doesn't notice the odd gleam in her eye or comment about her or not her rant about how good blood tastes and how it makes her feel.  Remember when Cami warned that she had a dark side, I highly suspect that this will be revealed in the episodes to come. Will she be a ripper like Stephen?  How much excess will she drive Klaus to?


For now, things are peaceful in the Mikaelson world.  Jackson is dead which means that sooner or later Elijah is going to get the girl.  Cami is now a vampire which means that Klaus already got his girl.  With Vincent helping out, perhaps there's finally a working alliance between the vampires and the witches. It looks good but we know that things aren't going to stay good.  Aurora is going to want vengeance for the loss of her brother and the besotted fool that Lucien is, he's going to help her.

We know that the worst which can happen for the Mikaelsons is that they're locked away from the world. No matter how much Aurora hates them, she cannot kill them.  This sort of takes the jeopardy out of the situation - not that there ever really was any given that the entire show is built around the Original family and the writers have made the Originals so very strong.

As episodes go, A Ghost Along the Mississippi wasn't that bad particularly because they had to cut short Klaus's manpain.  I really do like that Cami refused to be forced into a choice and demanded the right decide for herself.  It's about time they gave the female characters some kind of agency.