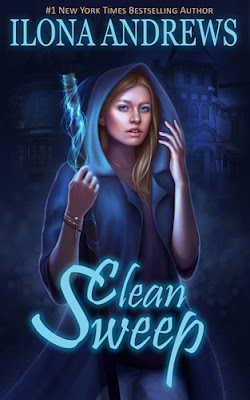 Though the guests are far from normal; she is an Innkeeper, gifted with magical powers that make her immensely powerful within its walls – more than necessary for policing and serving the supernatural guests who visit

But she risks her inn’s neutrality when her neighbours are under threat – a task that draws her beyond her inn to work with ignorant werewolves and vampire aristocracy – armed with a broom and her knowledge of the wider universe and an Inn that has only just begun to wake up.

The whole concept of this book is a fun mash up of both Sci-fi and Urban fantasy. We have all the creatures of legends – but they’re not the monsters we believe them to be – but aliens visiting from distant planets, each with their own cultures and histories that have been misinterpreted and misunderstood by humans. (A great example – vampires, a powerful warrior people, have a taboo against killing people who are at prayer. Since they don’t know whether a human waving a cross is a human praying or not, they tend to back away).

The history of each of the supernatural beings is really excellent – they’re not just space werewolves – they’re beings with their own history and culture and story which is far more detailed than just monsters in space. It promises a huge, vast, detailed world setting that I just want to roll in

And into this we have Dina the Inkeeper – and the whole concepts of Inkeepers is another wonderful, original one. Places of neutrality, shelters where anyone can be safe if they follow the rules: Inkeepers are an excellent contrast of ultimate power but large vulnerabilities. In their own inns, their own territory they’re immensely powerful, they’re part of a highly respected and honoured organisation with many friends and people who value them. Yet, outside of their inns, they have few powers outside of their territory – and that huge respect doesn’t actually grant them any real support or resources beyond what they can muster themselves.

We have Dina’s dual desire to both find her parents and live up to their legacy – even if she is pulled by her conscience to risk all of that. I like her a lot. More of her story to come!

We do have the beginnings of a love triangle here – but it is only a hint of the beginning rather than a something consuming the plot. Dina’s also duly wary at the idea of being with either of them, not thinking either an aggressive vampire or an alpha werewolf is a good idea. And it’s worth putting up with for one awesome line about vampire/werewolf love triangles

Beyond the romance, the way they interact is excellent. Dina is aware of her power her knowledge, her strengths and the risks she takes. Her decisions are sometimes based more on emotion than on cool logic (cool, callous, logic would say not to get involved at all even if it did leave her neighbours at the mercy of an invader), but they’re good decisions. She stands up to both of them in a really good way – she doesn’t reject their help, but doesn’t let them speak down to her, underestimate her or force her into a secondary role. But nor does she show any Spunky Agency or Keille Independence, she doesn’t reject them entirely, she doesn’t pick fights to show she’s the toughest or strongest or special. It’s a nice balance

She also has an awesome dog.

The other characters work well, even if they’re in Dina’s shadow (because it’s her story). Sean is stumbling into the world of the supernatural is interesting not just because he has to come to terms with all kinds of myths being real, but also because of the history and culture built into this setting: which contrasts nicely with Arland the highly original vampire who knows so much, but not nearly as much as he thinks he does, working round the difficult honour system of his people.

We also have her Grace Caldenia, long term guest at the Inn who is such immense, scary fun. I love her.

On top of all this excellent world and fun characterisations we also have a very fun, action packed plot that is a joy to read. There’s no down time, there’s no lagging, there’s no soggy bit in the middle of the book where everything seems to pause and get a little lost in the middle. The world building, the story, the character development – everything flows, nothing is rushed, nothing is skippable – and there’s never a time when I don’t want to keep reading. It’s also fun, which is a definite plus.

A downside to this book is that it is lacking in diversity – all of the main characters are white and straight. We have one Latino inn owner that Dina visits once for some brief information. It’s a shame and jarring when considering the author’s other books. I do hope that this will improve.

In all this book is awesome, new, original, interesting well written and great fun – I hope it keeps going for many many more books; this has the potential to be one of my favourites