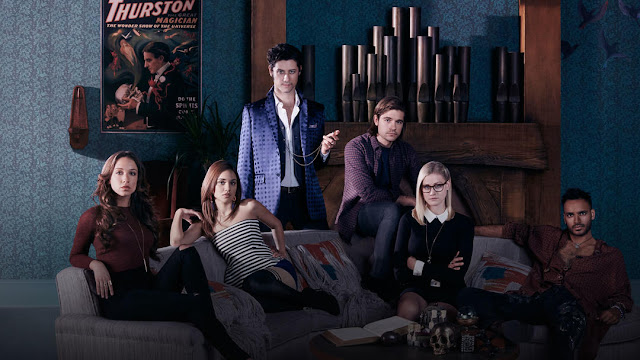 I’m going to start with Julia because I still think she has the most interesting storyline and the potential to be the best character. She’s continuing to learn with the Hedgewitches, only this time we see her magic (with a distinct dubious moral slant) interlaced with Dean (who is now back with his eyes – albeit he is blind) lecturing about why Breakbills teaches the way it does and why it’s a terribad idea to just pick and choose what magic you study based on what interests you – you need control and greater understanding or bad bad naughty things happen.

Julia is becoming more and more disconnected from James who is getting really agitated and worried about her – which is also affected by Miranda basically considering James to be a distraction. Julia does suffer a body blow when Eliot, looking for his stolen book that Kady took. Thankfully the book is attracted to another of his books (literally, the books have sex with each other because of course they do) which lets him lead Quinn right to the Hedgewitches. Eliot knows about the Hedgewitches – and regards them with utter and complete contempt, sure he knows way more than them and is a lot more powerful than them – an attitude that even the largely incompetent Quinn seems to share.

Of course Julia sees Quin – and confronts him about not trying to get her into the school (especially when he says she’s “better than this” – ignoring her lack of other options). He tries to change the narrative – presenting the idea that she always liked him broken and weak and needing her help and support and now can’t stand that he’s the better one. It’s terrible, insulting, ridiculous – and doesn’t come close to matching the narrative. She’s not trying to assert superiority over him, she’s actively seeking his help. In fact, it feels a lot like (perhaps to match his magical shortcomings) he’s belittling her to try and break away from those days of dependence now he no longer needs her. She rather excellently points out she feels exactly the same way about magic as he does (something he doesn’t seem to consider in his arrogance) – but I still think he deserved (and hopefully will get) far more of a slap down than he got

It looks, for a moment, like Julia is actually listening to him and ready to leave magic behind (she goes back to James and justifies her absence by faking a drug addiction) – but Miranda texts with another nifty spell for her to learn.

Back at school it’s time for everyone to find their magical specialty and to be put in their house by the sorting hat to join their groups. Alice can manipulate light (a “physical” talent – like Eliot and Margot and those of the many parties) while Quinn flunks as “undetermined” (I will have a full blown temper tantrum if it turns out he’s the super special chosen one with ALL THE AFFINITIES).

Alice, who doesn’t have much of a learning curve, still wants to summon her dead brother – so it’s time to use more unwise magic and this time nearly get someone killed again! (Hey at least she didn’t ACTUALLY get someone killed this time). She then decides she has to to do something awful for her – ask Margo about school gossip (sorry, did I miss something? When did Margo and Alice become such enemies?) and she does know something about Alice’s dead brother Chris. Or, rather she knows someone who might: Emily; a woman who turned her back on magic. They go interview her and learn that Chris did try to help her and in doing so overdid his magic and became a dangerous ghostly monster spirit.

Any sensible person would consider that a worrisome problem and maybe not summon the terribad evil darkness stuff again. Of course she does. Quinn decides to take some precautions so when, predictably, Alice does summon her evil ghostly brother and he tries to kill them both – so Quinn binds him into a wooden block instead. Alice is, of course, enraged by this and is sure she almost had it working and they totally weren’t about to die horribly, honest.

While that leaves me eight kinds of revolted that we had Quinn Doing The Right Thing Despite the Silly Lady Folk not once but twice in this episode. I dearly hope Julia, at least proves her wrong because this is leaving a terrible taste in my mouth. Can we have no more of this, please

Anyway over to Penny – he still hates Quinn and he has found his super power: he’s psychic. Something everyone is really not a fan of this is, apparently, a terribad thing to be. But rather than challenge the idea and assumptions it turns how Penny has the super magic transport power. 10:1 this means he’s going to be able to cross realms to the magic realm place. Definitely going to happen.

I don’t hate it, really don’t. It’s just… I’m not sure there’s anything I particularly like about it (except Julia) beside that. I’m… not loving it. Not hating it, but not loving it.