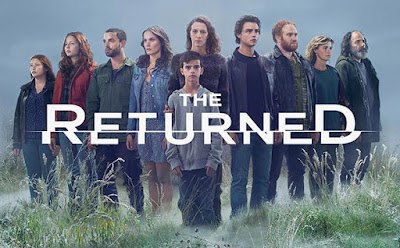 Time for lots more creepy, a bajillion storylines and a general sense of not knowing what’s happening.

Starting with the inevitable flashback to Louis where we conclude he has always been super super creepy. Specifically he keeps drawing pictures of his nightmares and they keep coming true

Which is why, in the present, when he has a nightmare about Julie he recruits Madame Costa to go wandering to try and find her. The zombies of zombieville stand around looking spooky by don’t actually do anything.

Julie has decided to track down Victor/Louis’s still living father who is in a coma. After hanging around for a little while, friendly nurse Ophelie realises Julie is one of the people who disappeared – and promptly offers her a place to hide in the hospital. She does this because the plot says so because there is no damn way she has a logical reason for this. I suspect a relationship is on the way now that Laure is almost certainly dead (whatever that means on this show) – which I’d appreciate more if it were handled with a bit more subtlety than bringing two women together and relying on lesbian magnets to inevitably moosh them together.

Meanwhile Adele, Simon and Chloe have gone into hiding in the church (to avoid Lucy and her fellow corpse cult). The priest there is perfectly fine with lying to the police and ensuring that a newborn baby in the care of an apparent completely disconnected mother and zombie father is kept away from the authorities. Of course he is.

He probably would have been found but Alcide is thoroughly traumatised by all of his fellow police officers being killed. Despite (or because?) of that trauma, he’s quite willing to believe Lucy when she says the undead totally didn’t kill the cops – they just tied them up. For their own protection. Honest.

I think there may be something in the water of this town.

Jerome, despite being deeply suspicious of Pierre, now decides to work with him to find zombieville – they get a stroke of luck because Audrey (new dead girl who was on the same bus as Camille) arrives and knows just where to luck. She has a painful meeting with her mother Sandrine – who, alas, has been listening far too much to Pierre the Awful and lets Pierre and his little cult imprison Audrey for nefarious purposes.

Alas, she has also drunk the water

Over in zombiville, Lena, Claire and Camille are all still hiding from the freaky uinresponsive zombies – though Lena is planning an escape. Camille is much more horrified because Esteban has become one of them – unresponsive and staring into space. After crying a single poignant tear (the art director worked hard on this, damn it) he goes to join his unresponsive zombie friends. Camille’s trauma is epic and very well displayed… except she kind of lashes out in rage against just about everything this season so it’s less meaningful and more like standard operating procedure. She’s worried that she and new boyfriend Virgil may end up the same way. Would it be terribad awful of me to say “I hope so”?

Twist time! Berg the guy investigating why the dam collapsed et al may actually be Pierre’s missing father! The man who built the ORIGNAL dam (which was also destroyed mysteriously). While I cry for more exploration of this, part of me can’t help but realise that means Berg, a Returned, has been put in charge of investigating the collapsed dam and has a whole lot of soldiers helping him when he has absolutely no ID and no official position. And if he did have ID it would should have shown that a) he was already under investigation for destroying the last dam and b) that he’s 80 years old and looking awfully good on it

Did the soldiers just see a random guy passing by and say “aha, man with only one name, you must be the expert! Come, investigate fragile construction and sensitive equipment with us!”?

Over to Serge and Toni’s creepy hut – it is now occupied by all of Serge’s zombie victims. May they eat him. This is supposed to cause more brother angst. Really, imagine how little I care about the serial killer’s pain – please eat him