Hidden (House of Night #10) by P.C. Cast and Kristen Cast 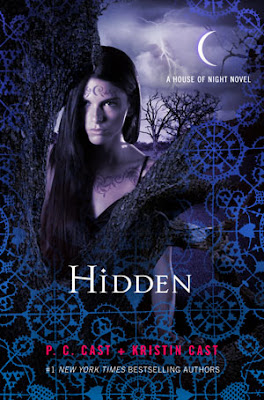 Neferet continues to be evil – and has decided the next step in her evilness is to kidnap and sacrifice Sylvia Redbird, Zoey’s grandmother. Naturally Zoey and the gang run to the rescue, even though the Vampire High Council is providing no support for their efforts. They also need to be careful with their public persona as Neferet is starting to launch a public relations battle with the human authorities.

It does give Aurox a chance to make a choice about who he wants to be and which side he is on.

We need to take a moment to look at the overall story arc of these books – because I’m on book 10 now and it’s not quite holding together.

The overall meta is that Neferet is a big bad evil who must be stopped. And if you preserve your thinking to that very shallow depth (understandable since deep thinking and the House of Night Series go together like Canadians and tropical weather) then that kind of holds together. Neferet does evil things, Zoey and co then respond to stop her. But what does Neferet actually want? And, no “evil” is not a motive. So we have Neferet rather belatedly acquiring a motive: she wants “control” rather than just power (which I’m taking to mean no accountability. Which I’ll let pass… except all of Neferet’s power now seems to come from her having to repeatedly bleed and beg for help from her Evil Cow. How does she have more power than she had before?). And to get this power she’s going to make humans and vampires fight each other and then she can swoop into the ashes and be confident she’ll take over

Ok, let’s suppose for a moment that this plan has a chance of working when she’s pretty much setting herself up as a number one target in the giant war she’s planning on starting. Let’s let that go for now and instead ask:

WHY THE HELL ARE YOU IN TULSA?!

Look if you want a global conflict, it’s not going to start in Tulsa (no insult to Tulsa, the same applies to my home city or most cities on the planet). In fact, her attempts to manipulate humanity have netted her some shaky control over the mayor of Tulsa. I paused a moment to see if she meant the Governor of Oklahoma. Or a senator. State senator? No, the Mayor of Tulsa. That’s the extent of her power. It’s not even the state capital or the biggest city in Oklahoma! It’s the 47th biggest city in the US. It doesn’t have a significant vampire presence – the most important vampire in this city was Neferet herself.

Even in Tulsa, Neferet ignores the one target that could actually make a difference in this conflict – Thanatos, High Council Member. Thanatos may as well not be there as far as Neferet is concerned – why ignore one of the most influential of the vampires’ leaders? But then, the feeling is mutual! Because facing indisputable proof of Neferet’s evil murderous ways the High Council of Vampires decides the appropriate response is to Not Talk To Her Anymore, so there. I suspect they may also have given her a nasty look. That’s it. Meanwhile Thanatos continually pokes Zoey and co to grow up and be ready to face the big bad evil Neferet and how can you be such nattering children?!

Because this whole broken story comes down to one thing: centring Zoey. So Neferet, rather than actually do anything to further her wicked plans, instead decides to target Zoey again and again and again. She’s killed Zoey’s mother (and if she’d just chosen ANY OTHER HUMAN, she wouldn’t have been discovered by Thanatos) and the entire plot line of this book revolves around Neferet kidnapping Zoey’s grandmother to get a sacrifice to KILL ZOEY, despite KNOWING that Sylvia Redbird is an impossible sacrifice because she isn’t a person, she’s just a collection of Native American mystical stereotypes, a couple of handfuls of feathers and a good cry over environmental destruction from a full trope collection. Neferet has literally paused her entire plan to attack Zoey again. She repeatedly sabotages herself because she must attack those meddling kids!

This is one of the many problems of the whole series. The story centres on Zoey while, at the same time, not actually having Zoey do a great deal. Most of her decisions during the series have been guided by the Irritable Bowel Goddess  making her decisions for her while she stews in guilt and self-doubt – and her actions against Neferet are pretty much always defensive: Not defending the world or defending Tulsa, but defending herself because Neferet is inexplicably obsessed with her. It’s clumsy writing – Neferet has no coherent plan because her whole role is to attack Zoey over and over so Zoey can then step up and be shiny with her special powers (which, again, seems to exist to take all her actual agency away and just make her a vessel for shiny powers. This book, again, with her saving the day by reciting awful awful awful poetry that Kramisha randomly gives her because, why not? You want Zoey to actually achieve something?) This renders not just the plot of this book – but the plot of the entire series – extremely convoluted and not only is it not driven by the characters, it’s not driven by common sense.

This book was basically another redemption book for a murderous man – Aurox this time – Neferet was barely the point.

Of course, this being House of Night we also have all kinds awfulness as well. For ableism we still have repeated use of the slur ret*rd as a slur. We have the mystical visioned Shaylin who has been cured of her blindness because vampires cannot be “damaged”. And the whole gang still goes to school on the bus they insist on calling the “short bus”, a derogatory term for buses used to the transport disabled students to school.

On to POC – we have Thanatos (lurking in the background being ominous and mysterious but doing nothing), Shaunee (pretty much following Zoey around and since de-twinning from Erin she has even LESS personality – all she does is worry about Erin) and Kramisha who also has no real role beyond providing magical aid for Zoey. I mean, they’re all there but the only characters in Zoey’s life who have anything resembling an actual role or personality are Stevie-Rae, Aphrodite (who is both awful and the only person with a shard of common sense in between that), Stark and, increasingly, Shaylin. The rest could be replaced with dolls who have their power.

And as for Native American characters – well, both Zoey and her grandmother Sylvia are Native American. Which is relevant only because of woo-woo. Their race is all about woo-woo, all about myths and legends, all about magic, magical rituals, magical artefacts and general mysticism. This is a common trope with POC in general – to reduce them to the mystical brown people who provide woo-woo to the plot and their whole role is about the magic their POC-ness grants them. This trope is especially pernicious for Native Americans who are continually portrayed as wise mystics dispensing magical aid and little else. Which pretty much entirely sums up Sylvia Redbird

Also, why is Erebus, the PERSONIFICATION OF DARKNESS, a white guy who embodies the sun?

We should also take a moment to look at Lenobia’s love interest, the reincarnation of her previous love interest from Lenobia’s Vow. So she can now love this guy because it’s her old lover returned –ignoring the fact that his experiences (previously a Black man in 18th Century Louisiana, now a White guy in the 21st century) are so utterly different that there’s absolutely no way for them to be the same person. On top[ of that she is worried about getting into a relationship because the world is more dangerous than it was in 1788. Errr… no. Lenobia, the world is not more dangerous now than it was for a Black man in Louisiana in 1788 in an interracial relationship. It really really REALLY isn’t and it continues to gross ignorance we saw in Lenobia’s Vow about the racial context they’re invoking.

Also, again we have Black people described as coffee orders.

On to the homophobia – of course we have homophobia. After Jack died, (forgotten by, well, everyone), Damien faded into the background because it wasn’t about Zoey, certainly his grief was downplayed and largely ignored. Well, now with the ashes of the pyre barely cold, Zoey has decided Damian needs to date again. This involves Damien giggling. A lot. It also means Zoey approaching a complete stranger and asking him if he has a boyfriend – because putting people on the spot in public, while working, to disclose or deny their sexuality is totally ok guys! Damien is also continually called “Queen Damien” and “Miss Congeniality” and “Gay Boy” without the slightest challenge because constant homophobia isn’t a problem to any of these characters.

We also have a terrible little moment where Neferet’s description of a man meant to depict him as weak and pathetic is that he’s “feminine”. Go Matriarchy!

We need a special mention for Erin – since de-twinning from Shaunee she has decided to turn fully evil. Why? Since when does anyone need a reason to do anything in this series? She and Shaunee stopped finishing each other’s sentences so she decided to sign up to Team Evil Bull Fucking. Perhaps it’s because the author has only two positions: fawning, personality-less Zoey follower, or evil sexual woman. And yes, Erin turned evil and suddenly she’s using her water powers to perform impromptu wet t-shirt competitions, having lots of sex, stripping off and she’s even inherited evil Aphrodite’s evil sexy laugh – the mark of true awfulness! Other books imply a correlation between sexiness and evil, but House of Night is not even that subtle (possibly because, given the vocabulary presented as impressive or obscure, the authors don’t know what correlation means) – if a woman is evil, she will be sexual. It is a rule.

This book achieves one thing – reminding me that the House of Night Series is so utterly terrible in every way and while it’s very very consistent in its awful, it can still find new and terrible ways to be horrible, pushing it just a bit further with every book.