An Unattractive Vampire by Jim McDoniel 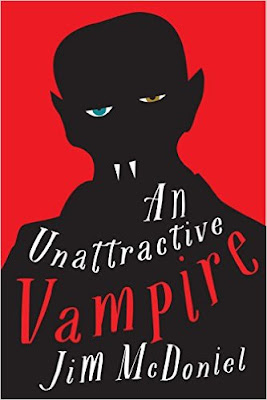 This book is HILARIOUS

Go buy! Go! Why are you still reading this review? Go read the book!

There have been a few books that have poked fun at how the concept of vampirism has changed over the years – especially how the most common portrayals tend to have vampires who are attractive and sexy above all else.

Enter Yulric Bile, an old school vampire who has woken up after an unfortunate period of downtime (damn those puritans. In fact can we have an aside where I just hail the awesomeness that was the depiction of puritans here. It takes a lot of work to make puritans hilarious but my gods they’re excellent) has woken up in the modern world in the basement of Amanda – a woman who has been trained to take on any adversary since being the guardian of her little brother Simon, who always has a hatchet.

Yulric has problems. There is the huge culture shock he faces after centuries away (he is now trying to bottle electricity and hates cars. Really really hates cars). Then there’s the problem of Amanda not putting up with his bullshit and regularly backing him down with a cross and her little brother Simon who is definite evil genius material and keeps experimenting on him.

Then there’s the fact no-one even believes he’s a vampire - because vampires are beautiful and he certainly is not. He is not putting up with this and makes his own nefarious plans to find out who is behind this and remind them exactly what vampirism is.

And it is awesome. Yulric manages to be so ridiculously sinister and powerful, while continually being mocked and thwarted by Amanda who is infinitely more awesome. These characters are so much fun together, her capability along with her slightly sad history and refusal to tolerate any nonsense excellently works with Yulric’s endless evil and her little brother’s twisted genius. I couldn’t have imagined a better dynamic between these three

The whole book made me laugh repeatedly. The interactions, the puritans (including the female cultist following Yulric who was, again, awesome, hilarious and an excellent challenge to misogyny). The characters, the world and the whole war between ancient vampires and young pretty ones in body glitter kept me smiling with every page – and repeatedly laughing out loud.

I laughed at the idea of a teenage Vampire show where all the actors were actually vampires. I laughed harder when a fight between these vampires and Yulric became fraught because Yulric refuses to kill the actors because he’s marathoned the dvd series and NEEDS TO KNOW WHAT HAPPENS NEXT. I collapsed with laughter when this fight became more fraught because Amanda and Yilric had a side fight with the main writer because he refuses to acknowledge her One True Pairing and insists on redeeming one the villains!

Top it all off with Simon, the extremely ominous little brother actually having the highest death count (while Amanda and Yulric scream at him to stop for the sake of their fandom!) and I just can’t applaud enough

There’s also an excellent tour of vampires of the world – all the old, terrifying vampires like Yulric coming forth – and they’re all different, from different cultures – Chinese and Meso-American and African and Mesopotamian, all very different in their powers and creation (and all outraged by the pretty pretty vampires). I also really like how bemused they all are about how vampires are created – mixing blood, what’s that about? (One of them admits “it’s a Christian thing.”)

Diversitywise I’ve already mentioned the vampires from different regions of the world who all come together to fight and I do like the plurality of different vampire legends represented with them. We have some minor POC as side characters and among the Pretty Vampires but the main cast is predominantly white (Yulric who leads the ancient vamps, is White. Amanda, Simon, the head of the civilised vampires – the most prominent pretty vampires are all White). We have Catherine, a Lesbian, who is drafted to support the ugly vampire team fairly late in the book. She isn’t a major character but she’s there, she lives and she has the fun role of being the rather normal human among all the supernatural – which is a nice subversion of many tropes.

Honestly, this book is made of joy. Utter utter joy, I just can’t imagine not complete loving it because it’s so perfect in so many ways. This is one of the books where I felt bereft when it ended because I didn’t want it to end.