Grimm: Nick, Adalind and the Rape No-one Talks About 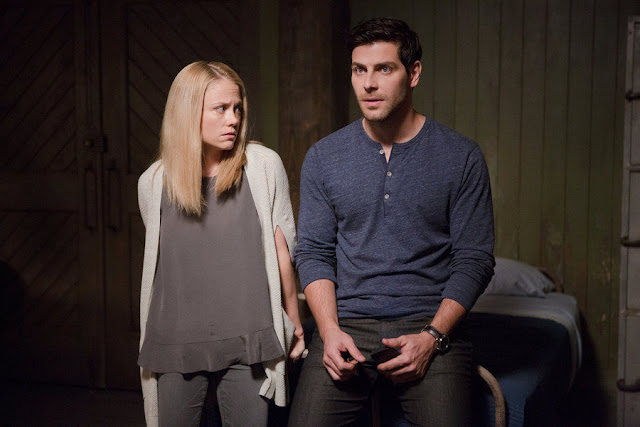 This isn’t the first time we’ve spoken about issues on Grimm. In fact, recently, there were so many issues that we simply did a post calling it all out because it was almost impressive how many terrible elements they managed to cram into a season.
And yet, here we are again because Grimm has managed to sink to a particularly galling - and sadly predictable - depth. Nick and Adalind have slept together for the first time and are heading to coupledom.
That paragraph pretty much sums up the problem with this whole romance because “Nick and Adalind have slept together for the first time”, is not what the show says. Monroe and Nick himself have both openly spoken about Nick having slept with Adalind once (or maybe even twice) before.
Let us be adamant on this point: Nick has never slept with Adalind before. Nick has never has sex with Adalind before. Nick was raped by Adalind
I’m repeating this for emphasis because the show is determined to gloss over this and rewrite history:
Nick was raped by Adalind.
This was not having sex. It certainly wasn’t a romance. This was rape.
For it to have been sex and not rape, there would have to have been consent. That is the ultimate definition of what rae is - having sex with someone without their consent. Coercing them into sex by whatever means: force, manipulation, intimidation, taking advantage of their incapacity or deception. Yes, I know I am repeating myself a lot here, but  I am repeating myself because the writers of Grimm have completely lost this very basic and unquestionable definition of what rape is.

Remember, to “have sex” with Nick, Adalind disguised herself as Juliette, Nick’s fiancee. She used woo-woo to trick him into sleeping with her for special magical purposes to steal his Grimmy-ness and basically turn him into a normal human. Nick didn’t know this was Adalind in his bed. Had he known we can guarantee the would not have consented to sex - he and Adalind were vicious enemies at the time (hence her trying to remove his Grimm powers), no sensible person could argue that Nick would have consented to this.
But this is a moot point - because whether Nick could, possibly, maybe have consented if he had known, the fact remains he did not know. His hypothetical consent is irrelevant, when Adalind crawled into his bed, he did not consent to have sex with her. He did not know she was not Juliette. He consented to have sex with Juliette - not Adalind - and the only way she managed to “have sex” with Nick was by deception, by fraud.
Yes, I’m being repetitive again - but this simple point has been one Grimm has repeatedly failed to acknowledge. Juliette herself acted as the wronged party throughout this storyline, acting as if Nick were cheating on her rather than being the victim of rape. Nick is constantly shown having to mollify and comfort her as a result of his victimisation: and absolutely no-one sees that has horrible as it is. This continues to a point where, because of woo-woo, Nick has to sleep with Juliette disguised as Adalind and Juliette actually jokes about it “being his chance to sleep with another woman.”
No-one considers that this may be traumatic or painful for Nick because he is being forced to sleep with Juliette while she looks like his rapist. No-one questions the cruelty of Nick having to sleep with someone who looks like his rapist. Oh they expect him to be uncomfortable because he and Adalind are enemies, but no-one comes close to acknowledging what Nick is actually facing.
As an aside - this whole scene has an extra level of distaste from both Juliette’s “sleep with another woman” line and, later, with Monroe suggestion Nick has slept with Adalind twice since he had sex with Juliette while she looked like Adalind. That whole concept really reduces both women to their appearance rather than personhood - that Juliette becomes a different person because she looks like Adalind.
Throughout season 5 of Grimm, the writers have done their very best to rehabilitate Adalind, to downplay the enmity she and Nick had and, above all, to completely deny this rape all to try and push what we’ve been dreading all season: a Nick and Adalind romance. It has developed almost from the first episode - as soon as Adalind revealed she was pregnant with Nick’s child, there was not a mention of that child being born of rape. No, all discussion was about the family they were going to make, of Rick being a father and, above all, of looking after Adalind.
All season Nick has been carefully solicitous of Adalind, his rapist. He has been kind. He has been caring. He has been protective. At no point was there a shred of acknowledgement that Nick was playing carer and protector to the woman who raped him. He even set up home with her
Can we pause a moment to emphasise this? Nick moved in with his rapist and absolutely no-one addressed that.
Now, I know some people want to argue that Nick isn’t exactly being kind to Adalind so much as to the baby she was pregnant with/gave birth to - but that’s not ok either. Adalind is a person (a terrible, rapist person, but a person still) - she doesn’t STOP being Adalind and instead become Ms. Babycarrier McWomby because she is pregnant. She doesn’t stop being Adalind because she’s the mother of Nick’s child. You can’t completely erase her personhood, her history, her actions because she has had a baby!
All of this built up to the inevitable - Nick and Adalind had sex. Actually had sex this time, with consent and a complete and utter erasure of the rape having taken place. The closest we get is Monroe wondering if it’s “weird”
I can think of few more appalling depictions of rape than having the rape survivor move in with their rapist, care for and support their rapist and then have sex with their rapist - without one single, brief acknowledgement that they have been raped and that said rapist is a rapist.
This is hardly the only problematic thing about this relationship - and we certainly need to talk about how women become love interests only when stripped of their powers. Nor is it the only problem Grimm has had with rape, as we mentioned before and with the problematic storyline of Juliette and Renard being magically attracted to each other - but that’s not going to happen in this post, because it would be eclipsed and I don’t think we want the distraction from the main point here:
Nick was raped and the writers not only continually ignore and downplay that fact, but are now setting him up to fall in love with and build a family with his rapist. That is not ok, and this point simply cannot be made strongly enough.
Posted by Sparky at 9:00 AM