Revealed (House of Night #11) by P.C. Cast and Kirstin Cast 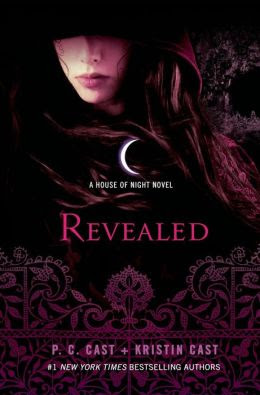 Neferet’s machinations continue to kill more people, only this time in a very prominent, public fashion. Faced with a possible backlash from humanity, the vampires of the House of Night need to act quickly to expose Neferet and protect their own reputation

Perhaps realising how utterly inadequate Neferet’s Curse was about actually giving Neferet an actual motive to be the big bad. So this book spends a whole lot of time going through Neferet’s history to try and give us a better reason for why she is the Worst. Unsurprisingly, it petty much fails. We have three options:

Firstly, from Neferet’s curse we have the ongoing supposition that Neferet is evil because she is broken. She was one of Nyx’s super special ones hence the reason she got lots of shiny healing gifts she didn’t give a shit again (because Nyx has TERRIBLE judgement or, again, is just trolling everyone)

Secondly, her cat died. Seriously. She couldn’t deal with the loss of a pet. This is a hard, painful lesson many children learn. Neferet decides she hates Nyx and all she stands for because her cat died

Thirdly: She’s kinky. Because Neferet likes to be rough in the bedroom and punish her naughty naughty lovers she is evil and corruptible. In fact, she may even be kinky BECAUSE of her terrible past from Neferet’s curse. It’s not even a matter of her inflicting it on lovers without their consent – one of the stories from her past is the lengths she goes to to find a man who WANTS her to punish him. But no, she’s kinky that means she’s corrupt and evil (and he’s corrupt and sick) and they’re all corrupt and broken.

At least on some level we have Erebus –

- Wait, we need to talk about Erebus. Why is Erebus the god of sunlight? He shines in sunlight, he shines all right and sunny. Erebus is the Greek… not even god, more avatar/chthonic entity of pure darkness. Do the authors just pick names at complete random for funsies? Don’t they even try to do some research. Seriously all it would take is wikia. Google. It’s not hard.

- anyway we have Erebus accusing Kalona of being responsible for corrupting Neferet. But the reason why she’s susceptible to that corruption in the first place is because of her evil naughty sexuality in the first place. And, really, all this attempt to place some responsibility on Kalona comes off far more as a path for Kalona’s redemption with Nyx (his uber redemption) than any real attempt to explore Neferet.

So Neferet is evil because she was raped, which may or may not have contributed to her being kinky and either way her evil evil sexiness (because this book series hates sexual women) left her open to corruption by an evil rapist guy who is now on team goodguy and being redeembed because redeemed men is totally allowed

In fact, let’s have a look at redemption and how the whole team is treating Nicole, the big bad red fledgling who hasn’t actually done a whole lot of evil (and whose acts pale in comparison to Kalona. And Stark. And Aurox. And Rephaim. Ye gods so many redeemed evil men) has to crawl over broken glass to have the good guys tolerate her presence. Everyone is ridiculously suspicious of her considering how quickly they embraced

Redemption in general is broken in this book – but in part that is down to a new broken storyline to help centre Zoey a little more (because the book really needs that, right?)

So, lets follow the broken nonsense of this storyline: after the death of the human mayor on campus (Neferet’s doing) there’s a whole load of hostility against vampires and the vampire High council decides the utter best thing to do is absolutely fuck all. Because if these powerful, skilled and influential vampires actually get involved as would be sensible, Zoey would be a lot less central to the plot. There’s no logic behind the decision beyond ensuring no-one else possibly eclipses Zoey – except possibly Thanatos

So let’s sabotage her as well! Thanatos began this book with me cheering for her. Thanatos happily told the useless high council where to get off. Continues to tell Zoey and her friends to stop squabbling like 10 year olds and even put Zoey in her place about lecturing Thanatos about a goddess she has worshipped for centuries as a High Priestess. This is excellent…

Except the book went on to basically say that Thanatos has no right to tell Zoey off because Zoey, the teenager, does indeed know the Irritable Bowel Goddess better than the centuries old Thanatos. And, in case there was any doubt, Thanatos has several teenagers executed. Teenagers. And I’m not even going to look at their crimes because it would be bullshit to do so when we have that damn list of redeemed rapists and murderers wandering around campus playing good guy. Their crimes are irrelevant next to standing next to Kalona.

Just in case we missed that that we’re not supposed to agree with it (which is understandable given how utterly broken this series’ attempt at morality is), Zoey makes it clear that she doesn’t think Nyx approves. So looks like Thanatos is heading into bad guy zone.

Of course, Zoey isn’t exactly morally right this episode – and it’s done in a terrible way. Zoey’s use of old magic apparently has consequences (despite the fact she hardly ever uses it. I mean, really, she was given a “Seer Stone” yet never actually uses it to see!) which absolutely no-one warned her about (you think someone would have mentioned at some point. Maybe. Just maybe?). This is used to make Zoey super angry and actually kill some homeless people. She feels so guilty she actually turns herself in.

Fine – but can we rewind a little but to when Zoeymagically killed two Black people and absolutely no-one cared? Really – Zoey deciding to care NOW, when she has evil magic controlling her, but not when her own little snit killed two Black people is glaring and typical of the awfulness of this series. Those dead black men were irrelevant to Zoey’s morality and her grief this time just emphasises how meaningless they were before.

I suppose if we had to drag up anything resembling a good side to this book it’s that the endless homophobic and racist treatment of Shaunee, Kramisha and Damian is somewhat lessened – but only because their role in the book is extremely tiny.

Time for some assorted irritations because there’s a limit to how many words I can use to analyse every terrible thing this terrible book does so terribly:

Zoey stomping her feet and having a mighty temper tantrum because Shaylin and Aphrodite dare to use their predictive power as they feel they should rather than at Zoey’s direction. And reading Zoey’s aura is a terrible violation of privacy, but they constantly use Shaylin’s aura reading power on others. Nicole gets her aura read on a nearly hourly interval and no-one cares about her privacy.

The House of Night deciding it’s utterly outrageous that the police would follow… normal investigative practices…? We also continue to have random ableism, fat shaming, sexual shaming of evil women, random homophobia, misogyny and everything else that makes this series such a toxic stew.

We have more deaths. They touch some people way more than Zoey yet, yet again, we focus on Zoey as the primary victim. Because it all has to be about her. Zoey has an epic ability to be so self-absorbed