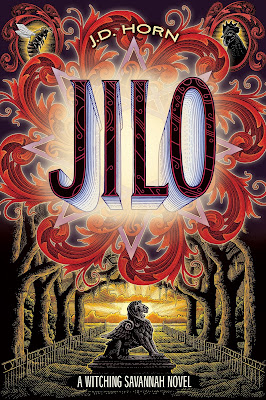 I’ve liked Jilo as a major character in the Witching Savannah Series as a powerful and clearly complex figure. She has awesome potential and we have a lot of allusions to a long and complex history. The problem is that this series is not about her, it was all about Mercy. Jilo’s relationship with Mercy has been very complex but, on the whole, it has been one of mentor and student. Or an almost maternal relationship. There are times when Jilo even refers to herself as Mercy’s mother figure

Of course, that’s a trope. It’s certainly a trope with an elderly Black woman with a young white lady in Savannah.

That made this book extremely necessary. It’s a book that focuses not just entirely on Jilo’s history but also on her family history and her magic as well. I think that’s extremely necessary because Mercy’s family has also been very much about her family history and the importance and uniqueness of her magic. By talking about Jilo’s family and relationship with magic we put her on an equal level of importance and value as Mercy

It also allows a wonderful expansion of the world building with us seeing magical systems and sources beyond Mercy’s family’s relationship with the Line and the Old Ones – and it’s equally as powerful while being completely different. Jilo’s family’s relationship with the Beekeeper and the old powers is only tangentially created related to the kind of magic that Mercy’s family practices. This shows there is magic beyond Mercy’s magic and that there are magical struggles and storylines that do not involve them. This is not Jilo playing a part in Mercy’ storyline. This is not Jilo living a lesser for of Mercy’s storyline. This is Jilo having an entirely separate magical storyline which doesn’t involve the Taylor family at all

Jilo’s family history goes back 3 generations – and it goes back 3 generations of Black people in Savannah, following them through the 20s, 30s, 40s, 50s and onwards. While this includes a lot of fascinating insight into the magical system and the desperate struggle each generation has faced to try and turn away from magic but inevitably be drawn back, it is equally a story of race in America and it permeates every element of the family’s story including the supernatural elements

We have rich white sorcerers who feel entitled to Jilo’s family’s magic and service, who constantly exploit and use them every generation and get away with it due to their wealth and race and power. As antagonists they are inherently people who force Jilo’s family to turn to magic time and again because in a system that makes them so vulnerable how else can the possibly protect themselves?

While that’s a common driving force for them seeking magic or being forced to resort to magic so is the simple realities of living in a racist, segregated time. The magic they have to turn to too survive not just against threats – but also economically. There’s Jilo’s grandmother, raising 4 young girls and increasingly too old to perform the hard physical labour of cleaning – magic, despite all her misgivings, provides an income when she has few other options.

That’s a definite part of Jilo’s own storyline that is defined by this. A single mother with no income and no chance to use her education. And she had an education and brilliant ambitions – but not chance to become the doctor she dreamed as a Black woman (flatly told that there were very few chances for Black doctors – and those choices should go to Black men who can actually help their community). Even her accent that seemed so stereotypical in the main books is revealed to be creation, along with the whole persona of “Mother Jilo”. In all, Jilo is a brilliant woman from a line of brilliant women – intelligent, wise, capable and determined – facing insurmountable obstacles and carrying on.

I also like that while race permeates their story, it isn’t the only obstacles they have faced, and it’s above and beyond the magical obstacles they face. They have both economic hurdles and even as simple as Jilo’s terrible terrible taste in men who have used her and failed her and exploited her time and time again. Jilo has led a hard life, not just from magic and not just from being Black but also from being a Black woman and with more than a few men willing to use her. Including these excellent lines when a man asks if Jilo’s child is his:

“Is he yours? Have you fed him? Have you clothed him? Made sure he had a roof over his head?”

Honestly I would have to spoil so much to cover the many excellent points this book made – from the pregnant young women who sought Jilo’s grandmother’s support to challenging Jilo’s attitude towards other women’s ambitions to Jilo’s own mother’s complicated life and career when she passes as a white woman.

The plot waits until the very end of the book to start to link Jilo’s story to that of the Taylor’s doing a really good job of making sure Jilo’s story is distinct – but also not completely alien to the rest of the books to an extent that it feels like a completely separate world setting.

And when she does interact with Ginny there’s some excellent challenge of Ginny’s well-meaning-but-deeply-flawed attempts to understand racism and Jilo.

There is a trans character – or so it seems – Willy describes herself as wanting to be a woman and wearing woman’s clothes. She naturally faces a great deal of bigotry, including from Jilo to begin with before she recognises Willy as family and is willing to champion her (while Willy clearly views herself as female, everyone continues to use male pronouns to refer to her). Jilo’s support helps dispel the depiction of bigotry and challenge it – but it doesn’t change the depiction of Willy. I am still unsure whether Willy is developmentally disabled or not as everyone treats her as a child. I never really got the sense of her as a real person so much as a burden to protect and pity. It made her less of a character and more of a plot device.

This was a book that was very much needed – not just to avert the terrible mammy stereotype that had dogged Jilo from the beginning but also to truly expand the world and plot line of one of its most important characters. It added a lot to the overall storyline and was an excellent read.