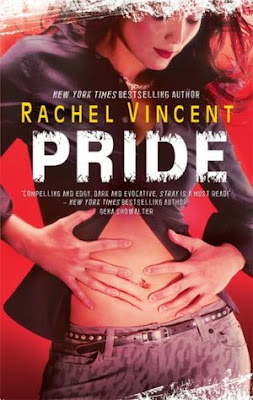 I expected this book to be a lot worse than it was. Admittedly after the last two books, the book could literally be possessed by a serial killing ghost that tried to attack me with a claw hammer and it would still be a better book than I expected. Still, my low expectations meant I was definitely pleasantly surprised.

In this book, the misogynist Alphas questioned Faythe on whether or not she intended to marry and how many kids she’d have – and if she didn’t have any immediate plans she was simply useless to werecat society: because what’s the point of a werecat female who isn’t pushing out the young ‘uns? Honestly, I expected Faythe to grab Marc’s engagement ring, suddenly become pregnant and problem solved! So, kudos, Pride for not doing this

In fact, in general Pride wasn’t nearly as offensively awful as the previous books, not even close. Partly this is due to the complete lack of spicy South American werecats (and general POC. You wouldn’t even know Marc was Latino if you didn’t know from previous books). Normally I would complain about lack of POC, but like the lack of LGBTQ characters I find myself slightly grateful simply because it means we won’t have to endure he representation (though we do have a ridiculous moment where 3 people share a single bed and leave another empty because a) the 2 men won’t let the other share a bed with Faythe and b) two men sharing a bed is terribad icky.)

The main issues I have with this book is that it completely ignores the context of the books that have come before. Like we have Greg, Faythe’s father who is pretty much cast as the Good One in this book. He is the reasonable Alpha. He is the nice Alpha. And he’s just being terribly trapped by the Alpha council who is totally awful and old fashioned and misogynist.

Except this completely brushes over the last two books where, if you recall, Faythe was locked in a cage for not being perfectly obedient. She was under such a level of house arrest that she worried she wouldn’t be able to use the bathroom without being watched. She has been set up almost from birth to be with a certain guy and no other choice was considered. Now this guy who imposed all this on Faythe is the “good one.”

Just as this book Faythe spends so much time pining over Marc who rejected her last book because she wouldn’t walk down the aisle with him. She is sasd, desperate to get him back and completely brushing over his violent, furniture destroying temper. And making light of him menacing other men for looking at her (remembering HE broke up with HER) – claiming he wouldn’t take it too far, despite the fact in previous books he half killed a man for daring to flirt with her. We’re just ignoring all that – now her saying no to him was totally a mistake she regrets

And that, that right there, is why this book annoys me so much. It’s not what is in this book that is the problem, it’s the fact that the shifting narrative excuses or ignores what has gone before because the antagonist has shifted. Greg is the good Alpha and kind father while Malone is the misogynist ruthless arsehole and Blackwell is the old fashioned misogynist arsehole. Marc is the perfect lover Faythe was a fool to let go – not the all-but-arranged marriage she was being forced into.

When we introduce Kaci (really, what is with the spelling of these names?!) it gets worse. See, Kaci, a new 13 year old female werecat all alone and vulnerable. Now, she’s a child so a lot of the narrative about how she needs sheltering and protecting could relate to her age: but ultimately her situation is based far more on her being female. She is being hunted for being female. Even Faythe is outraged that her father and brothers aren’t protecting her since she’s female – she repeatedly makes comments about them dropping the ball with her. But the entire first book was about Faythe wanting to be free from this stifling “protection.” This whole narrative, while not terrible in and of itself, serves as a complete justification for how Faythe has been treated in the first 2 books.

In short, this whole book, while not awful in itself, serves as an attempt to wash all the terribleness that has preceded this book. This kind of happens within the book as well – like we have an apparent innocent being grossly and unnecessarily abused. It could have been a call out of the abusive culture of the werecats. It could have been a challenge of this torture and violence… but instead the book ends when

To top this off, Faythe would be one of the Spunkiest of Spunky Agents (I would say the most, but this is a genre that has Sookie Stackhouse, Clary Fairchild and Elena Michaels… so hard competition there). This woman literally cannot sit still and not mouth off for 5 minutes in her own trial. She’s pathologically incapable of thinking, of planning, of even the slightest shred of self control. Basically her whole personality is practically DESIGNED to convince me, and the reader in general, that she is a child-figure in need of a keeper. I think even the choice of having her refer to Greg as “daddy” is to emphasise how childlike she is.

I also loathe the whole world building that magically makes women super-duper rare snowflakes who need to be protected. It’s tired, is repeated far too often and it’s another excuse to have a nearly all male cast which just needs to die.

Once we step past this we also have an issue with the clumsy writing. In particular, I don’t think the author has a lot of respect for their readers’ intelligence with a lot of scenes being unnecessarily explained and bogged down with excessive repetition and exposition just to make sure we’ve really got it. One particularly amusing scene has someone explain basic genetic theory to a room full of Alphas in such painful unnecessary detail that I’m convinced that the Alpha council doesn’t have three brain cells to rub together

Putting aside all this, it’s not an appalling book. The plotting of the alpha council, the introduction of the Bruin’s, the political maneuvering are not terrible storylines (albeit just a little bit simplistic – the other Alphas are pretty much caricatures of unreasonableness) and in general the book didn’t remotely infuriate me as much as the previous ones. It didn’t exactly engage me either, but it could have been a whole lot worse. Maybe there’s hope for this series? (hah, I doubt it).