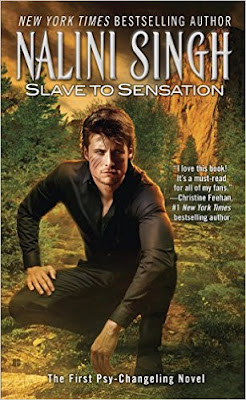 The Psy, the main power of the world, have long embraced a policy of Silence. A policy which trains their children to feel no emotion. The icily emotionless Psy have maintained this policy for generations now, to such a degree that a Psy that feels is considered alien and broken

Sascha Duncan is broken. Daughter of one of the Psy council, a Cardinal Psy with no real power… she feels. She feels intensely and she’s finding it harder and harder to hide the fact

When she starts working with Lucas, alpha of the Changeling wereleopard clan looking for a serial killer, his interest pushes her emotional control to the very limit.

This is going to be a little bit of an odd book review. Way back before we even started Fangs for the Fantasy, when Renee and I were just discussing, debating and mocking the odd book when we talked to each other, I read several books in the Psy-Changeling series and produced this somewhat abortive review. Then they never really appeared again. This is unfortunate because, not only is Nalini Singh a prominent author in this genre and also one I like a great deal, but it’s also her fault that we keep picking up paranormal romances.

If you’ve read Fangs for any length of time, we’ve had a rocky relationship with paranormal romance – generally not liking the tropes or structure of it. If you send us a book review request with a book that appears to be a paranormal romance, we will email you back that we’re generally not a huge fan of this genre so we may not be the best place

Yet we still read the genre because of Nalini Singh. Because I really loved this series – and I really liked her Guildhunter series and I wasn’t going to miss out on other potential awesomeness. So, yes it’s her fault.

And I do like this book a lot. I really love the world building. The whole concept of humanity, Changelings (wereanimals) and Psy (psychic people) is a fascinating one. I love that it’s set a little way in our future to have slight sci-fi themes, but not enough to be completely alien. I love how not only do we have our world with these different creatures, but that we also have the world itself to be dramatically changed. Things like the greater environmental protections brought in by the Changelings, the more extensive forests and influence that brings. While the Psy have shaped the cities and building and have a whole new information source based on their powers

The nature of the Psy powers and the imagination of the psynet are original and drew me in with the originality of it and the implication. It made this whole psychic side of the Psy a much more tangible element in their lives. They weren’t humans with shiny powers – they were entirely separate beings with entirely different ways of living because of this whole hidden world that they’re unaware of.

The same goes for the Changelings – it would have been simple to make them the awesome, flawless ones next to the cold, emotionless psy and their complicated Silence policy (which, again, I loved because it was more nuanced than just “this is bad”) but no, their society is also flawed. It’s frequently brutal, harsh and unforgiving

It also treats strong female characters with a diversity of strength. It’s common in this genre to have one woman in a sea of men – but here we have a good mix of women in as well, with a variety of different strengths. The Psy council has powerful psychic women with both high levels of intelligence, power and ambition. The Changelings have Mercy, a female wereleopard Sentinel and warrior as well as Kira, a young, brash confident wereleopard who also seems to be physically focused in terms of her strength. We have Zara – who is a professional, an architect, an artist and clearly valued for her excellent skills. We also have Tamsyn, a mother, a cook and a backbone of the Clan with considerable authority. Lucas makes it clear that she has as much or more authority as the Sentinels and she’s one of the few characters who regularly challenges his words and opinions and makes independent decisions. Women are not just strong or powerful because they are weapons – there is more than one form of strength. Including Sascha – her courage, her determination, her willingness to find and embrace her strength after a lifetime of assuming she is broken and then making her own choices based on that realisation. Sascha starts lost, finds herself then takes charge. Sascha is awesome.

This book also has a considerable number of POC. The Psy embrace racial diversity, their Silence emotionally not really regarding racial differences so much as scientific combinations of genes. Sascha is part South Asian and part East-Asian, her mother is Japanese. Several member of the Psy Council are POC. Some of Lucas’s changelings are POC and expressly described as dark skinned, as is one expert he consults who is firm in rejecting racism.

I am not so sure about Lucas. He is described as having “muted gold skin” which is one of those ambiguous descriptions we see a lot.

My main dislike in this book is the classic alpha male bullshit we see in a lot of romance stories, along with the very annoying romance tropes of oh-we’ve-seen-each-other-and-now-I’m-throbbing-hard/dripping-wet-every-time-I-think-of-you. Honestly I’m amazed that male characters in romance don’t collapse from constant priapism while the women need plastic underwear.

But my main beef is how Lucas chases Sascha. In her society, touch is not ok. Psy do not touch. They’re known not to welcome touch. They’re known to actively resist being touched. He touches her. A lot. Over and over again. Yes she secretly enjoys this – but he doesn’t know this. He just assumes, he assumes his touch will be welcomed and denies

I hate this trope – I hate the idea that a “no” just means try a bit harder. And no, it isn’t justified by the world setting. This is not a concept that is safe to challenge: if someone doesn’t want you to touch them, then you do not touch them.

I also really hate the idea of the mating bond. I hate magically fixed mating as it repeatedly destroys the concept of consent. I also hate that in this case it’s expressly said that men know how to complete the mating bond so more “independent females” can’t avoid it. That doubly emphasises the lack of consent here: this bond is something that is imposed one women, they can’t stop and this is seen as a good thing. It’s a problem.

This story, despite a pretty large number of characters, has no LGBTQ characters. Which is a problem. On top of that the society is annoyingly and unnecessarily heteronormative. One of the elements of Changeling society – which is used repeatedly to pressure Sascha – is that they are casual touchers with anyone who has “skin privileges”. Changelings touch each other. Lucas repeatedly kisses other female members of the clan, hugs other female members of the clan, touches them to show affection and comfort and closeness. They’re adamant, time and time again, that this is not sexual, not about romance and not about sexual attraction. Changelings touch and kiss each other for the sake of comfort and has nothing to do with sex. Ok… so why the gender separation then? Clay is hurting badly with the dead of his sister, where’s the comforting kiss for him? Where’s his hug from his Alpha? Where’s the comforting touch of Lucas or the other Sentinels to Kit? This is the problem of inflexible heteronormativity – we cannot seem to think outside these strict lines of opposite sex attraction even when it’s not supposed to apply.

There are certainly problems with this book. But the characters are amazing, the story is excellent, the writing perfectly paced and balanced and the world building is legendary. I love this book, I really like this series and it keeps me picking up Paranormal Romance series.