Consent in Romance: Being Able to Leave 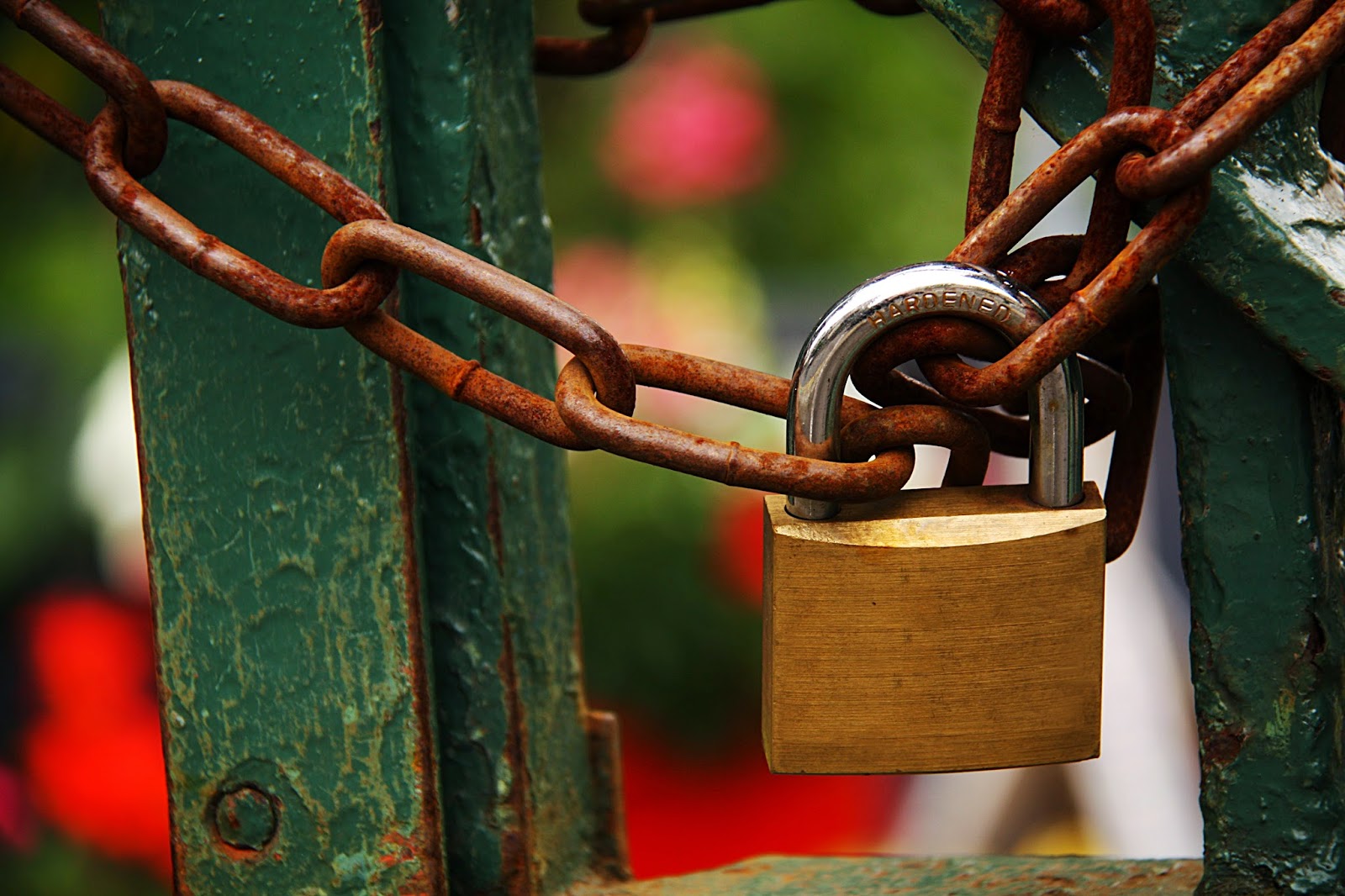 Alphario, rippling romance hero, tenderly checks the chains properly restraining his beloved, the sweet Captiva. Carefully he ensures that she has taken the proper dose of the addictive drug she can only possibly get from him and they lovingly share a kiss before he leaves, romantically checking the bars and locks the cell door behind him. They will live together Happily Ever After - there will be no escape.


This is, I hope, not generally considered the most romantic of scenarios. At very least some pretty extensive bondage consent will have to be discussed before hand - yet time and again I see romances end in such a way that the participants are bound together; lovingly, happily, certainly - but still bound, unable to leave should either party actually want to do so.


This is something that is very rarely addressed in Paranormal Romance - and for good reason. After all, a Happily Ever After is usually the goal here. No-one really wants to think of their sexy vampire romance ending because Vlad has filed divorce papers and they’re now fighting for custody of the werewolf puppies. That’s fairly understandable (however, it has to be said I do want to read that story). So, no, I’m not saying the genre needs more books about relationship break down and love affairs turning sour.


A lot of the books I’ve read in Paranormal Romance/Urban Fantasy don’t have that for various reasons. One of the most common of which are mystical bonds - some kind of magical woo-woo that chains the characters together eternally with no presented possibility of either character being able to break that bond. The two love interests fall in love (or, in extreme cases, see each other) and the magic hits - they are now glued together by the woo-woo of True Love FOREVER.


There are so many examples of this, there’s no way I could count them all. The Black Dagger Brotherhood series has the male vampires create mystical bonds to their wives (this involves lots of smelling and occasionally lethal violence to any other man who dares to come near her) which is made very clear is permanent. In fact, it’s so permanent that if one partner should die the other will usually passively suicide. It’s also used as an excuse for violent jealousy and several times us being told (romantically, of course) that there’s no way a male vampire would ever let his mate go. Even if she wanted to.


How… romantic. Restraining order anyone?


Keri Arthur plays with shapeshifters bonding for life in the Damask Circle world and Spook Squad series. Actually, this trope tends to be trotted out especially often when wereanimals are involved: Werewolf bonds can also be found in Wolf Haven, the Mercy Thompson and Alpha & Omega series, the World of the Lupi series and the Psy-Changeling Series - which has just about everyone forming woo-woo bonds


Twilight has werewolves “imprinting” on their mates - something that is clearly meant to last for life (including when said imprinting happens with children, babies and foetus. Yes pass around the brain bleach, I’m sure we could all use a dose).


It’s not just mystical bonding though - a lot of the time I see couples that are solidly welded together with angst. Overwhelming, needy, my-life-is-over-without-you angst. This is often mistaken as utterly romantic that this person is so invested in their love interest that they physically cannot stand to live without them - but it’s dangerous, it’s creepy it’s coercive and it’s even abusive.


One of the warning flags for domestic abuse is a partner who threatens to commit suicide should their partner ever leave them. It’s recognised, rightly, as deeply coercive and threatening, a form of emotional blackmail to force the partner to comply with their demands. It’s manipulative and it’s dangerous - and it removes the ability to consent. It is much harder for anyone to leave their partner when they feel that person will literally die or completely fall apart and become non-functional without you. The person becomes responsible for their partner’s lives, for their ability to exist and leaving their partner becomes an act of almost murder or at least severe harm. There’s burden of guilt, a burden of responsibility that at best makes it hard to leave the relationship and at worst makes it outright impossible.


A classic example of this is, of course, Bella in Twilight; when Edward leaves her her utter distraught horror is so extreme that it can only be expressed by blank pages (though this may be a comment on writing skill as anything). This woman’s life ENDS without Edward and she starts actively courting hallucinations by risking death to hear his voice. This is not healthy. This is not reasonable. And when you have a partner who will collapse to that extent, how can you possibly leave them?


That’s one example - but it’s one among many; look at the relationship between Tohrment and No’One in Lover Reborn where both parties are hurting to the point of self-mutilation and desiring suicide and are only pulled out of this by the love of the other - well that sounds wonderful and powerfully romantic that they’ve “saved” each other - but without some serious follow up, it also feels scarily co-dependent. These two were on the road to self-immolation without the other - at this point how could either of them leave the other?


Both the Black Dagger Brotherhood and Sherrilyn Kenyon’s myriad series in her Dark Hunter World are full of big strong sexy men who are tortured and need to be saved by the sexing of a good woman. Zsadist, Phury, Archeron, Kyrion, Zarek, Xypher - it would probably be quicker to list characters whose eternal angsty torture isn’t saved with magical vaginas in these series. In the Maker’s Song Series we take this even further - not only does Heather face Dante completely imploding to the point or being non-functional if she left - but if Dante is pushed over the edge by her leaving he could quite literally be a threat to the entire planet. No pressure there, Heather, but if you leave him you will cause the apocalypse


In some cases this can go beyond mere angst - with one partner (or both) literally suffering some kind of curse without the other. In the Werehunter Series not only does Verne bond with his love interest, Bride, but without that bond he has to spend the rest of life celibate. There’s a penalty attached to her leaving, he literally can’t have any other woman but her and she curses him to be alone if he leaves her. Again, this isn’t a singular instance, in Sins of the Night Danger and Alexion are not bound together but Danger does get moved into a little pocket dimension with Alexion, for all time. We also see this in Kiss of the Night where people actually forget Wulf exists - except one woman, Cassandra. She doesn’t have to stay with him - but if she leaves she is dooming him to a life of utter loneliness where literally no other person acknowledges his existence


When discussing nearly any problematic romantic trope, the Anita Blake Series usually raises it’s head (and other body parts) and that also applies here. Of course, Anita’s bonds with Richard and Jean-Claude pre-date their regular humping so I wouldn’t include that - but the harem of men she acquires along the way are chained to Anita by means of her all powerful vagina. There’s no indication of these men being able to break away from Anita’s thrall - and, in some cases, no option for them to even try because their personalities have either been completely altered by Anita’s sexy woo-woo - and not just those she enslaves as her “Brides”, but they even speculate Micah and Nathaniel, two of her true loves, have been “altered” by the ardeur to be perfect partners for Anita. Everyone considers this ok because they’re all happy… because the ardeur has made it so.


This series also brings in another consent stomping trope - addiction. Yes, Anita’s gentials are more addictive than heroin and crack combined. Do I even have to say that if your lovers have to go through a 12 step programme to leave you, then there’s a problem with consent there? This is a trope that also arises in the Merry Gentry series with humans becoming addicted to the colourful fae.

I know it’s a recurring theme to have love “save” someone, but that puts an incredible burden on that loved one - unless you can also show the “saved” person as healed and independently strong afterwards, you have put responsibility for their health on the shoulders of their partner - and because of that how can they leave? If you have a person who is literally so emotionally dependent on another that they cannot live without them then that is not romantic - it’s not even healthy; it’s not a sign that this is true love it is a warning sign that this person probably needs serious help.


That’s not to say they can’t love each other fiercely and be totally distraught and devastated if the other leaves them, but that needs to be love, not life-or-death dependence which is inherently compromising to consent.