Review: Kiss of the Night by Sherrilyn Kenyon Book 4 of the Dark Hunter Series 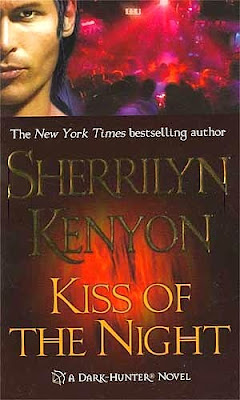 Wulf is cursed. Despite being an ancient Viking of massive size and incredible fighting prowess, anyone who sees him forgets him within 5 minutes. He can never have a friend and he is a stranger to everyone – even if he sees them every day. The only people exempt from this curse are his fellow Dark Hunters, who he can’t be around, his blood family – of which there’s only one left, his enemies – and one woman. Cassandra.
Except Cassandra is an Apollite. Doomed to die on her 27th birthday unless she feeds on the souls of humans, becoming a Daimon and the very enemy Wulf fights to destroy. More, Cassandra is the last direct descendent of Apollo and enthused with his life essence. When her line dies, so too does Apollo – and so too does the sun itself. When she dies, everything dies.
And the Daimons are trying to kill her. Not just Daimons but Spathi, ancient warriors pledged to the goddess of destruction, far more deadly than anything the Dark Hunters have faced before.
Wulf has to keep Cassandra alive as their relationship grows deeper and as she becomes pregnant. Then both of them are faced with the harsh truth that, as a 26 year old Apollite, she only has months to live. Faced with this, Wulf gets a far greater insight into the pain the Apollites suffer and how the seemingly awful choice to kill humans so you can live seems so much more tempting when its your own loved one facing the inevitable death.
Reading this book is like watching a fascinating film, but you can’t see the screen because there’s a couple shagging in front of the screen. Great world, great setting, potentially fascinating setting – aaaand lots and lots of pages of bumping and grinding.
The sex isn’t as Ikea as Anita Blake, as dull as Vampire Huntress or as ridiculous as the Black Dagger Brotherhood, but it takes a special prize for the Iridescent Indigo writing. Yes, this prose is so purple that special eye protection may be needed (“He tasted of beer and wild, untamed masculinity!”). And this makes the scenes long, very very long. Extremely horribly long. Also, sorry but I have to quote this line:

“I need to go clean up”
He didn’t release her. “I don’t want you to.”
She cocked her head at him in confusion.
“I like the sight of my seed on you, Cassandra,” he said raggedly in her ear. “My scent on your skin.”

Yes, we have Anita Fug!
It doesn’t help that we have the standard “oh I’ve just seen you and now I can’t stop thinking about your hot, luscious loveliness” that is so very common in this series – I really dislike the trope, it’s kind of lazy and seems to stand in rather than developing an actual relationship.
This relationship does have its own seriously dubious beginning.  Remember, Cassandra is the last heir unless she has a child and Wulf can only be remembered by his blood relatives. It would also help if Cassandra’s short lived Apollite child had an immortal guardian (sort of) so it’d be really useful if they had a child together, right? See, Artemis thought so too! So had Kat, Cassandra’s best friend, drug Cassandra then used special dream magic to draw Wulf and Cassandra together in what they thought was an erotic dream – but, SURPRISE GUYS – it was REAL sex and Cassandra’s now pregnant! Isn’t that wonderful?
Or, if you’re like me, you dropped the book and spluttered things like “what, what, WHAT?! You drugged her! They thought it was a dream?! CONSENT, HAVE YOU HEARD OF IT?!” Naturally Wulf and Cassandra are not happy about this and resent it severely for about, oh, 4 paragraphs, before getting all googly eyed about their upcoming child (in case you forget, this would be the child conceived without either consent, under the influence of magic and drugs, manipulated by people they trusted and between 2 complete strangers). I’m discomforted that such an extreme violation is not treated as the severely as was warranted – there was anger, but it was more “you took my car without asking and have scratched all the paintwork and left the tank empty” angry than “you drugged us and had us magically raped and impregnated” angry.
And there is angst. Oh there is a lot of angst. I sometimes think Wulf and Cassandra are having an angst competition – she because she will die before their baby knows her and him because he’ll have to watch their baby die – it’s a woe competition! WOE! WOE!
I do not like the angst in this book, not because the people don’t have a reason for angst (all the Dark Hunters have a reason for angst) but because it’s such an overwhelming part of their personality – it’s the keystone of their personality, it’s the defining part of their personality, it may actually be their personality in its entirety. I think this is one of the main reasons angst bothers me – when there is nothing more to a person but angst or when we don’t get chance to identify with the character before the angst is poured on it becomes hard to care. If you don’t have an emotional connection or investment in the character then why would their upset be compelling? This is a problem I had with Cassandra and Wulf. They both have very very good reasons for being upset, I can see it, understand it and sympathise with it – but I haven’t been given sufficient reason to identify with these characters to be moved by their pain – because their pain is so much of who they are.
However, between the angst there is a lot of world building and exploration of the Apollites, their culture and greater examination of the grey scale. After all, Apollites are often presented as cold, sadistic killers when they turn Daimon -  but you need to consider the sheer cruelty of Apollo’s curse. I’m glad to see that explored and the different  ways Apollites have of dealing with their fate – and becoming Daimon. Different ways to feed the soul hunger, different ways to survive. It’s nice to see these shades of grey into an increasingly more complicated world setting.
I want to know more about the Spathi. I love the many different ways the Apollites have for trying to deal with their inevitable fate. I love how different Daimons try different methods to make their soul feeding less harmful. I love that even the depraved Daimons we’ve seen are not as clear cut evil as previously thought – as moral Daimons try to limit the harm they cause by feeding on evil humans, but feeding on evil souls slowly taints their own morality. I want to know who all these characters are – the Spathi and the gods and who is Katra and where do they all fit? And what does this have to do with Acheron – and who or what is Acheron anyway? There are so many questions, so much intrigue and some really good charactersdin this series (when they are not humping away or burrowing in angst) and I can’t wait to see more of it explored
This series has a world that just gets richer and more complex. In fact, if anything I think I want more explanation of the world and who all this major figures are and how they interact. I think I’d read the next few books in the series just to see this world and fill in the blanks that I currently have – even if there was no story in the next few books, even if the characters were more annoying than Bella, Sookie and Clary combined, I’d read the books just to get more insight into this fascinating and compelling world.
In short – the meta-plot is amazing. The overarching plot of this series is fascinating, intriguing and some of the best I’ve read. It has a brilliant world, an excellent concept and is well worth a read. Unfortunately, the individual plot of the book, the protagonists, their romance and their emotional battles are much less compelling