Review of Sophia By D.B. Reynolds Book 4 in the Vampires in America Series 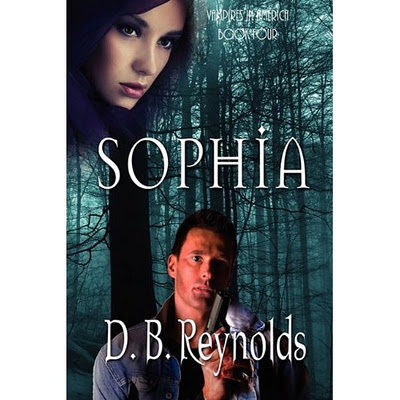 As always, in order to be fair to D.B. Reynolds, I am going to declare up front that I am not a fan of paranormal romance.  As far as Sophia goes, I do think it is the best book in the series that I have read to date.

Sophia get a summons from her vampire lord to return to Vancouver and upon arrival she learns that not only he missing but several of her his vampires are dead.  The only clue as to what is going on, is a letter that he left to her with instructions to see out Lord Raphael.  Once Sophia arrives in Seattle, she learns that several more vampires are dead and one human mate was savagely raped.  That is not the only surprise that awaits her, because investigating the murdered vampires, along with Cyn, and Raphael is Colin a former navy seal, whom Sophia has unresolved history with.

What I liked about this romance is that for once it wasn't a case of girl meets boy, some woo woo is interjected and then zmog, instant I lurves you forever. I think that we can all agree that, that approach to writing romance is old and tired.  The other flip in this, is of course the fact that for once, the female in the relationship in question is the vampire, and the human is male. This led to a lot less paternalism in this relationship, because Colin was forced to confront the fact that despite Sophia's appearance, she most certainly is not a wilting little flower.


Of course we couldn't have the balanced relationship motif take over the entire book, just ensure that things were suitably filled with machismo once again the reader will have to suffer through pages of Raphael going on about his Cyn and needing to protect her.  He controls her behaviour and threatens the death of her security if she does not comply.  This sort of controlling behaviour often passes for love in paranormal romance but it is anything but.  What it is, is a hallmark of abuse.  To make matters worse, Cyn is predictably shot and must be saved by two men and then driven to the vampire compound to receive Lord Raphael's  to survive her life threatening injuries.  This of course ends up justifying all of his controlling behaviour.  Oh, if only Cyn had been a good girl and sat pretty while the men were out investigating.

Cyn has always been the one to be constructed as the example of strong womanhood in this series, but she was far outstripped by Sophia this time.  Cyn is powerful because she is the mate of a vampire lord whereas, Sophia becomes a vampire lord and is therefore powerful in her own right.  No matter how many guns D.B. Reynolds has Cyn walk around in, she is still a human and therefore mortal.  I think this is why it irked me that Cyn felt like it was her job to protect Raphael.  I think that this was done to give her a small sense of power but in the end it came across as ridiculous.  Raphael can rip out a heart out of someone's body, he break all the bones in a human body with a glance, and he can use his magic to set a body on fire.  In the face of all that, the idea of Cyn wanting to play protector is ridiculous.

I wish I could say that there was something compelling about this book but I really can't.  For me it all sort of ended predictably.  It was difficult to invest in a romance that I knew from the start was destined to work out no matter what problems arose along the way.  The knowledge that at no time were any of the main characters in any real danger, took away from any suspense this book could actually offer. In fact, it just became frustrating because it made these moment feel like unnecessary filler.

Sophia is yet another novel that has all straight and White characters.  After reading Jabril though, I suppose the absence of people of color is truly a blessing. The truth is, when I pick up these books I really don't expect much more than a romance and a little woo woo thrown in for spice.  This is not the sort of thing that I enjoy, but if this what you like in a book, you might like Sophia.  At least there is a reduction in some of the isms that have become normalized in this serious.