Review: Destined for an Early Grave by Jeaniene Frost, Book 4 of the Night Huntress Series 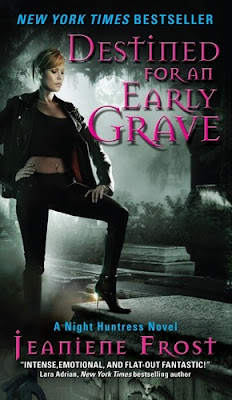 Cat is all settling down for a relatively quiet life. Having defeated the attack on their line and Bones now firmly ensconced as the co-ruler of the line with Mancheres, it’s time for a holiday. But, naturally, nothing is that simple.
There is a powerful vampire out there who has his eyes on Cat. Gregor is ancient, more powerful than Bones and is known as the Dreamsnatcher – and for good reason. With the power to invade people’s minds while they sleep and even kidnap them over vast distances, he’s a terrifying enemy.
Cat has to go on the run – a flight that literally takes her around the world, but always in secrecy. Scarcely being able to sleep safely, she has to travel in ignorance of where she is – not even knowing the continent she’s on, for fear of Gregor plucking the information from her brain. In endless frustration, she has to leave her rescue in Bone’s hands, ignorant of his plans.
Worse, as they flee they learn that Cat has a history with Gregor – a long and intimate history that has been erased from her mind. Both Bones and she have to worry about what happened in that time – and what Cat really felt for Gregor. All the while with Cat’s frustration over Bones’ plans and her acting in the dark to try and help him drive a wedge between them.
And if that weren’t enough, the ghouls are worried. If she is this powerful as a half-vampire, what would happen if she were raised as ghoul rather than a vampire? Would she have the powers of both? The answers are worrying people and making them easy recruits for Gregor
Last book I felt the series had really picked up. We had tension, action, a lot of lovely world building, an epic enemy and a focus on some powerful, character driven plot.
Which made this book rather disappointing.
A large amount of this book rests on a huge relationship drama between Cat and Bones – and it’s one I don’t buy unfortunately. I found it pretty contrived and forced with little real or understandable grounding. I can understand that couples do occasionally have huge irrational fights caused by each other not listening or thinking – oh yes I can understand that! – but this didn’t feel real. And even if it were real, it wasn’t a particularly fun read because I just ended up being frustrated and annoyed by both of them for being so pig-headed foolish
It started with Cat snarling and attacking Bones because of the side-effects of her pills, Bones lashing back in bad temper and stress. And then we get the big one – Cat does something that makes Bones think she doesn’t trust him, has no faith in him and thinks of him as less and there follows a good half of the book of estrangement and each thinking the other is cheating on them.
The problem is that, without spoilers, that thing that Cat does? Is perfectly reasonable given the information she has. Yes, Bones has a good reason to keep things from her, but so does Cat in acting on what she knows. Her actions were sensible, she took what precautions she could,  she chose to reasonably risk herself rather than, from what she could see, embrace Bones’ certain death. Did she not have all the facts? No, but nor was there any reason for her to believe that things were other than she saw. She was expected to sit back, watch and worry and trust that Bones had everything under control even though everything pointed to the opposite. In fact the whole reason Bones stomped off and Cat felt guilty annoys the hell out of me – because it rested on Cat basically not switching her brain off and trusting Bones is not only capable, but is pretty much infallible and always, inherently knows better than her. Which is even more glaring when following from her scenes with Gregor where she had her wonderful moment of rejecting such patronising, abusive behaviour.
While the make up scene addresses some of this, it still didn’t feel resolved. Especially when we come to the make up scene when Bones says:

You will never sit and wait for the outcome of a fight involving someone you love before throwing yourself into the mix, no matter how you might promise to change.

Why is that presented as a character flaw? She refuses to sit back and be a damsel and distress? She refuses to cower in a corner and squeal while her husband fights for her life? And that’s aside from the fact that he’s presenting these battles as HIS battles. What, Gregor is seeking to kill Bones and kidnap and enslave Cat. In fact, the only reason Gregor wants to kill Bones is to get at Cat. In what way can we possible characterise this battle as exclusively his? In fact, how dare he say she is sticking her nose in in these circumstances? How dare he expect her to sit back and not be involved in fighting her own enemy –her enemy more than Bones’s.
So it’s not resolved – Bones decides to love her despite this immutable character flaw, when really it’s not a flaw at all. Also, this whole “you hold yourself back from me” because she walls him off from reading her mind annoys me. There’s sharing things with your partner and being invasive and having no privacy. And this fight and the subsequent chasing, pouting, angsting and accusations takes up the majority of the book – even if it were well done it would probably bore me but I’d put that down to taste. As it is, the very foundation of it is so flawed that it annoys me, not bores me.
I am very happy with the way that Cat and Gregor’s encounter was presented. It was very clearly underscored from word one that the relationship was abusive and the much less naive, much less inoocent and much less vulnerable Cat of today is quick and happy to put a knife in Gregor and tell him he’s an arsehole of the highest order. He manipulated her when she was 16 and intimidated her into compliance with threat and anger – the Cat of today, in her 20s, won’t tolerate that bullshit and calls it for what it is. Which, considering the number of Urban Fantasy heroines who spend their lives tip-toeing around the “supernatural rage” of their partners, is a pleasure to see
But it does make Bones’s paternalism all the harder to take. And, similarly, I’m not best pleased with Cat quitting her job when the only thing she seems to have to replace it with is “spend time with Bones”.
Social justicewise, well Cat has been undermined as a strong, independent woman quite a lot here. There are some POC in leadership roles but they don’t take a lot of screen time. The closest we have to GBLT inclusion is Annette, the bisexual woman who loves to make men happy with threesomes.
When the plot actually happened and we got to see it, I was interested. I was interested in vampire lore, I was interested in what Kat would become, I was interested in their solution (albeit I fear we’re going to get magic girl who keeps getting stronger syndrome) I am curious about her mother as well and what will happen there (her mother remains one of my favourite characters in the series)
But there wasn’t nearly enough of it. It was somewhat tacked on the end of the book after pages of Cat running around being ignorant, being sad about being ignorant, having fights for no reason and then her endlessly emotional estrangement from Bones. It could have been a great book, but instead I was pretty grateful to finish it. It wasn’t painful, but it wasn’t fun. I’m tempted to give it 2 Fangs or lower, but really that would be more because I expected more after reading the last book than a comment on the actual quality of the book