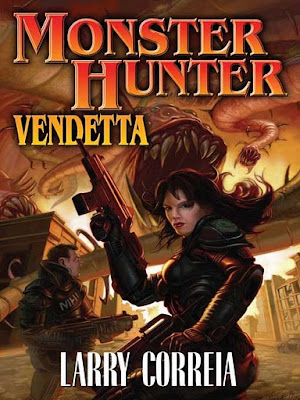 Owen Pitt continues in his job as a Monster Hunter. Hired to go round the world hunting down monsters of all kinds – from oni to chupacabra, from zombies to werewolves. It’s a very dirty job, but it pays well.
Unfortunately, in his last adventure there was a problem. Due to a large number of truly epic events, Owen was indirectly responsible for having a nuclear weapon drop into a very bad place and hit an Elder God. The Elder God is Not Pleased and blames Owen.
And so Owen finds himself being hunted by an obscenely powerful cult – a cult made up of many normal humans, but also no small numbers of monsters including shoggoth, oni, zombies, vampires and Mr. Trash Bags, his fiancee’s imaginary friend. A cult lead by a Necromancer of incredible power who is seeking to literally conquer the world with his army and his magic. And first and foremost to do that he needs to throw Owen through to the Elder God to curry some favour. He’s deadly, ruthless, lethal – and willing to go after Owen’s family to get the job done.
Of course, on such an epic scale, Monster Hunter International can’t be expected to act alone. The Federal government’s Monster Control Bureau is very much present and doing whatever it can to destroy this cult – and if that means using Owen as bait, they will. If that means sacrificing Owen’s family – well they’re happy to do that as well. Owen, less so.
And if things weren’t complicated enough, there’s a spy in Monster Hunter International – and the Necromancer himself has old ties with the organisation. Who do they trust and who do they blame?
I love this book and this series. And I feel vaguely guilty for doing so. I don’t think it has huge amounts of depth and nuance (but you’d be surprised and I’ll return to that) or even a super super complicated story (but it has twists). What it does have is scary monsters and guys with guns blowing them up with great relish. We have gun fights, monster fights, we stalk them, we run from them, we bunker down and raid and charge and storm. The enemy are monsters, not sparkly angsty monsters, or sexy monsters or nuanced monsters – monsters. The Big Bad wants to destroy the world, but the good guys have a gunship with really big guns. And lots of geeky references.
Part of me feels like I should be guilty for loving it, like being caught watching an awful action movie and then trying to justify your interest beyond the “oooh explosions awesome” factor. But there IS a lot more to the Monster Hunter series.
For one thing, it’s hard to hate anyone. Even the Feds who are pretty damn annoying (there is a libertarian streak that’s 10 miles wide in these books – and it’s the “guns and bunkers” libertarian school). Because every character is pretty real and pretty nuanced. In fact, if I had to choose the thing this book – this series – does best, it would be characterisation. Sure, the characters aren’t perfect, yes they make bad decisions and yes they have their petty jealousies, their unreasonable hatreds, their preconceptions etc etc and you can dislike them for who they are – but they are real.  Meyers is an arsehole of the highest order – but he’s also a ruthless man trying to stop the end of the world and willing to do what he believe he has to to make it so. And yes, he has an unreasonable reason to hate Monster Hunter International – but people dislike things for unreasonable reasons all the time. Grant is the character we all love to hate – but he has reasons, good reasons, human reasons behind his actions.
I think the book also does a good job of representing loss – especially loss from a war situation among soldiers who have to continually deal with it. There’s rarely a case of “oh look, the red shirt just died” and everyone moves on. The deaths, the losses matter. Even collateral damage of non-characters that many series would just have dropping in the wings to show how big and bad the monsters are
I love most of the characters as well. Owen, despite being a super powered killing machine, is also dorky and surprisingly fun – and big, fat and ugly and not ashamed of the fact. Most of the cast are extremely funny, endearing and just add to the whole plot – there aren’t any characters I feel are hangers on who need to be removed from the plot. And Mr. Trash Bags was awesome.
The series is racially diverse, Owen is mixed race, Trip is Black, Lee Asian – I think a substantial number of the Monster Hunters are people of colour which is a unusual to see. I’m not happy with the gangster gnomes, but otherwise we have a breadth that seems to go beyond “here’s our token minority”.
And there are gems in there – I loved how, when Grant was snarling at Monster Hunter International only caring about money, Owen turns round and says how easy it is for Grant to say that since he comes from a super-rich family. They aren’t common or overwhelming, but we do have these side-references
All in all, it’s a good book, a fun book and an action packed book. The story, with the spies within spies, the plots of several different actors and the sheer powerful malevolence of the enemy is exciting, interesting and full of questions that intrigued me – but above all, the characters make this story.