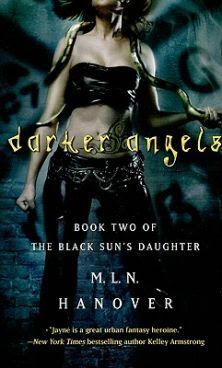 Once again Jayné (every time I read that name it got my nerves) Aubrey, Ex and Chogyi Jake are in the thick of it again. When we left the foursome, they were busy doing a tour of not-gay uncle Eric's various homes, attempting to create a wiki on the riders.  Though they are all exhausted, Jayné keeps pushing them forward, and this culminates in her acceptance of a mission in New Orleans.  The minute I read New Orleans I knew that this books was going to be all about Voodoo.

After Hurricane Katrina it is impossible to write a story without talking about the horror of natural disaster and Hanover dealt with the issue in a powerful manner.   Though it has been years, the city has not been rebuilt and we are given vivid images of ruined homes and the people who fell through the cracks.  I appreciated the fact that Hanover made sure to point out that it took money to leave the city and that those without were forced to stay behind.  It is not often acknowledged in the media, but class played a huge role in who lived and who died.

Once in New Orleans, the scooby gang, (yeah that's what I am calling them) meet up with former FBI agent,  Karen Black who wants help freeing a young girl from a loa who has take possession of her body. Thus begins the focus on a specific kind of rider - the loa. I really do wish that urban fantasy authors would step away from the association of people of colour with Voodoo.  It has been done to death and at this point has become so one dimensional that it is hard to retain interest.

We learn that there are various forms of loa and that they have a functioning society and rule separate from that of humans. In some cases loa are not the parasitic creatures that Jayné and the scoobies have always believed.  Loa and humans can work in mutuality with the person that they are riding and in the case of battle, Jayné comes to term with the idea that the enemy of my enemy is my friend.


The ability of a loa to take over the body is compared to rape in Dark Angels and personally, I found the analogy offensive.


He'd been violated. His body hadn't been in his own control.  I knew enough girls who'd had occasion to say the same things that I heard what he couldn't bring himself to speak. (pg 98)

Okay, nothing feels like rape but rape.  Urban Fantasy authors have a long history of taking real life experiences like rape and applying it to supernatural experiences and it shows a real lack of respect for those who have survived traumatic experiences.  It is appropriation for the purposes of a plot point and belies the seriousness of what happens when someone is sexually assaulted.


Jayné  remains filled with spunky agency, and I find myself wondering why the hell the scooby gang is following her around the world.  Any one of them would make better decisions than her and yet we to believe that she is a strong young woman.  I don't expect perfection from a female protagonist but I do need to believe that they are capable of walking and chewing gum.

Unlike Unclean Spirits, I am happy to report that this book is free of the whole gay-but-not-gay uncle trope.  It certainly made for better reading, though Hanover still has not seen fit to include a GLBT character in his story.  Though this kind of erasure is typical of urban fantasy, it still is a form of oppression.

Darker Angels is a scant 226 pages long.  It is not moving or challenging, or even highly entertaining and at best I would describe it as bubble gum for the brain.  At times the book itself is highly predictable but if you are having a couch day, it's not a bad way to waste a few hours.