Review of Unclean Spirits by M.L.N. Hanover: Book 1 of The Black Sun's Daughter 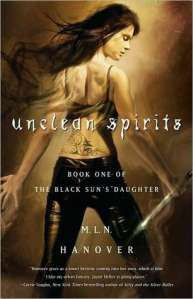