Mind Games by Carolyn Crane, Book 1 of the Disillusionist Trilogy 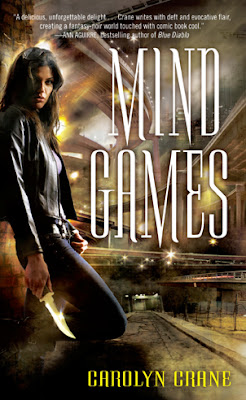 Justine is a hypochondriac in a downward spiral, her life falling apart as her anxiety and panic attacks take over. Until she meets Packard, a man who can turn her whole life around.
A highcap psychic, he can see her problems and more, he has a solution. By teaching her to zing her fears into other people, she can be free from her crushing dread and panic for the first time. While it offers her freedom and peace, it comes with a price, acting as a vigilante with her fellow disillusionists, all zinging their emotions and problems into other people’s brains – psychologically destroying them.
While their targets are untouchable criminals, Justine has to deal with her new life as a vigilante, keep what she wishes to preserve of her own life – and decide whether she even wants it any more – and come to terms with the new control Packard has over her – for without the ability to zing she would be even more vulnerable than she was before.
And then there’s a target she doesn’t agree with and things aren’t entirely what they see; against a backdrop of a spiralling crime rate as unpoliced psychics use their abilities without check – and people driven by desperation to try and bring some stability to the city.
This book surprised me from beginning to end. It’s complicated, it’s nuanced and you never reach a point where you can sit down and say “these are the good guys, these are the bad guys.” It’s never that simple and no-one is that clean. We’re hit from all sides with a barrage of questions and things to think about – the question of vigilantism? Even when it works? What about imprisonment, what about cruel imprisonment, what about when there’s no alternatives and what about when it cannot last? And dependence, even when the alternative is death – and deception that ends up with people becoming utterly helpless minions – but, again, the alternative is death and the deception itself is an act of desperation from a man in an intolerable situation. For that matter, the issues of those who know they are entering minionhood comes into it – especially when you consider the alternative is not far off death, so what choice is it? We even look at the extra toll it has on the black disillusionists who have become helpless minions of a white man. And how far does the end justify the means?
And we meet the ultimate target and he’s evil... but he’s not, the boss man’s evil, no, wait, both of them have engaged in shitty behaviour but both of them had damn good (or, at very least, idealistic reasons for doing so).
I don’t think this book is an easy read, not if it’s read fully. There’s such a lot to think on, many different angles and it’s hard to criticise any of the characters for their actions, even when you feel you should disapprove of them. On top of that, the characters are very human, very real – which probably adds to why it’s understandable why they do what they do and why none of them can be condemned out of hand. It’s a book that provides a lot of fascinating food for thought that demands more than a casual read. I am not sure how that can be maintained in the next book, however.
On the whole, I don’t have a lot of criticism of this book. The story is new and fascinating, the world interesting and different from any I’ve seen before and the characters are realistic. You can understand their decisions, they’re not perfect but nor are they ridiculous. They have proportionate reactions, they make decisions that are sensible given who they are and the situations they’re in and I never felt the urge to throw my kindle at a wall cursing the character’s foolishness. This is a wonderful step up. I can’t say I found any of them massively appealing – but I don’t think we’re supposed to or that we need to.
There are no GBLT characters but there are several POC. Most of them don’t, hold major roles but nor are they in negligible positions. I do hope to see more of them in future books to see how they are part of the story and group dynamic.
One thing we did have a lot of were mentally ill people. The protagonist is a hypochondriac and the portrayal is extremely well done – it’s a severe mental illness that is rarely respected as such. All of the disillusionists have varying conditions and in each case the severity of it is portrayed well and not downplayed.
I have some not exactly concerns, but elements I’m not 100% comfortable with.  The idea that a breakdown – especially such an extreme breakdown, is a positive, cleansing experience doesn’t feel 100% great with me – but on the whole it’s a great portrayal and one I’m very happy to see
The romance fell flat with me. I felt there was far too much instant connection between Justine and both Sanchez and Packard based on very little; Justine’s fawning over Sanchez for half the book seemed exaggerated and unwarranted. I will say that I am beyond happy to see that when both relationships were damaged by the unacceptable actions of Justine or Packard, there was no “I love you so I will completely forgive you!” moment. I appreciated that a lot – too often the unforgiveable is cast aside in the name of twu luv in this genre.

All in all, a good book, a unique book and one I definitely enjoy