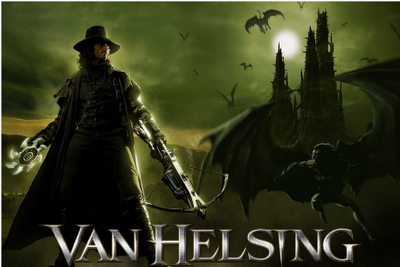 Van Helsing was originally released in 2004 and it stars Hugh Jackman and Kate Beckinsale.   As always, the purpose with the reboot, is to examine these movies from a social justice lens.
The first 8 minutes of this movie are in classical horror style and they are absolutely fabulous. They are filmed in black white and the music is suitably ominous.  The movie opens with peasants rushing through the streets carrying torches on their way way to Dr. Frankenstein's famous lab.  Just as he brings the creature to life Count Vladislaus Dracula appears to claim the creature for his own. It seems that Count Dracula, provided the castle and supported Dr. Franenstein's work because he wanted the creature.  When Frankestein refuses, Count Dracula kills him.  The creature grabs the good doctor and escapes to the windmill only to have the peasants set it on fire.  The creature yells, why just as the floor collapses, causing both him and the good doctor to be consumed by flame.  Count Dracula arrives presently to see the destruction and the scene shifts.
Enter Van Hesling who is apparently the most  wanted man in Europe, though he works for the knights of the holy order, a secret sect run by the Vatican that the public has now knowledge of.  After stopping in Paris to kill Mr. Hyde of the Dr Jekyll and Mr. Hyde fame (this is again another magnificent work of CGI) he returns to the Vatican. He is told that the Vatican is the last defense for humanity against evil, an evil that the rest of mankind has no idea exists and that for Van Hesling this is all a test of faith.

The Valerious family made a vow to God that they would not enter heaven until Dracula has been vanquished from the land.  To date they have not succeeded and with few descendants left, Van Hesling is tasked to help the family because of the last heir dies nine centuries of labour will but for naught and the Valerious family will spend and eternity in purgatory. He is shown a scroll with the words in Latin, In the name of God, open this door. The scroll also has an insignia on it that matches Van Hesling's ring.  He is told that if he goes after Dracula perhaps he might find out what memories he has lost and his purpose.

Before he leaves, Van Hesling goes to see a friar named Carl.  In a scene very reminiscent of every James Bond movie that has ever been created, Carl outfits Van Hesling with every single modern weapon that is is capable of harming are killing a vampire that he can.  The weapons are clearly advances for the 1800's and are reminiscent of that scene in most steampunk movies and or books. Unfortunately for Carl, despite his protests Van Hesling informs him that he has to accompany him to Transylvania.


When Van Hesling and Carl arrive in Transylvania, just as Anna and the towns folk are asking for the disarm they are attacked by Dracula's Brides.  It immediately becomes evident that Anna can hold her own in a fight, though Van Hesling keeps encouraging her to hide allow him to deal with it.  After killing one of the brides and driving the others off, Anna attempts to rearm herself in order to go an hunt Dracula, but Van Hesling decides that he has to use some sort of chemical to knock her unconscious.  This of course is yet another sexist trope that is common in urban fantasy.  Though Anna has grown up dealing with this and hunting supernatural creatures, Van Hesling believes he has the right to incapacitate her for her own good.  This pretty much follows the pattern of the movie, no matter how strong and competent Anna is, Van Hesling is always in the position to save her. In yet another  example, during an encounter with Dracula, Van Hesling brandishes a crucifix, only to learn that Dracula is immune to it.  Back at the castle,  Van Hesling is upset that he was informed and Anna has to ask him what he thought she had been doing this time.  She literally has to list the various methods that she and her family have employed to kill Dracula.

When Anna's brother Velkan is bitten by a werewolf, she stop Van Hesling from killing him because he is the only living family that she has left.  In the end despite her wishes, he does kill Velkan but gets bitten for his trouble.  It turns out that this bite is just a set up for Van Hesling to be in the position to kill Dracula, because Dracula can only be killed by a werewolf.  If that were not enough, we learn that Dracula is in possession of a cure and so Van Hesling sends Carl and Ann to secure the cure while he grapples with Dracula.  In the end, Ann sacrifices her life to safe Van Hesling but it's all okay because Van Hesling watches as her spirit ascends to heaven rather than spending eternity in purgatory. I suppose this is a twist on the hero dying to save the damsel in distress but when we consider that much of the time Van Hesling either downright dismisses Anna or is saving her, it detracts from the few moments of real strength that she displays.

The other truly sexist scene that truly sticks out to me is shortly after Carl saves a village woman from one of Dracula's brides.  She thanks him profusely and asks what she can do to repay him and he asks for sex.  She is shocked because he is a man of cloth, but consents.

From Dracula's brides to Anna, no woman is truly empowered in this movie.  The brides live solely to do Dracula's bidding and to see life brought to their offspring. They even refer to him as master.  Obviously, because this movie is based on old style horror, this sort of thing is expected; however, the complete lack of an empowered female character works to assert gender roles and ensure that the story revolves completely around the men.

Van Hesling offers an all White, heterosexual, able bodied cast.  Considering when and where the story is set, I completely understand why characters of colour were not present.  There is however, no reason that a GLBT character could not have been introduced.  I see no reason why Carl for instance had to be straight.  It would have had the problematic element of turning him into the gay bff, but at least there would have been some representation.

If you love CGI and larger than life monsters then this is the movie for you.  Richard Roxburgh who played Count Vladislaus Dracula, played one of the most camp versions of Dracula that I have ever seen.  Though the count was meant to be intimidating, it felt more like he was auditioning for the Cabret. It is also worth noting, that as much as I love Hugh Jackman as Van Helsing, there were times in which he seemed wooden and uncomfortable reacting to the CGI characters.  It took away from the fantasy of what was happening on screen. All of this aside, if you love CGI, larger than life monsters, and some pretty cool special effects, then this is the movie for you.