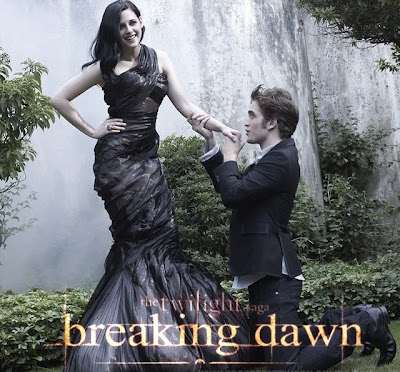 Breaking Dawn Part I is the fourth movie in the Twilight juggernaut. This film was much anticipated due to the wedding of Bella and Edward and of course the honeymoon night.  For many twi fans, these scenes were the culmination of a romance.  Just as with any other wedding there was discussion about the dress and plenty of hype.  I believe that the directors felt that this hype was enough to carry the story however, this assumption proved to be incorrect as far as I am concerned.  Rather than advancing the plot, this movie was two hours of fan service.

Like with every other Twilight film we had the savage native represented by the werewolves, and the every so whitesome and delightsome vampires, represented by the Cullens.  The other prominent messages were of course one must marry, even if said marriage is ill advised for various reasons, a pregnancy is gift no matter the risk to the mother and of course the ever popular imprinting as a cover for pedophilia.

Rosalie’s transformation in the books from dedicated hater of Bella for giving up her mortality to utter devoted servant to the fertile one was pretty unpleasant - and it was no more palatable in the film.. See, I think Roaslie’s dislike kind of had a point - it is fairly reasonable to be vexed by someone deciding to make a vast life decision at the age of 18, especially when that life decision involves nothing more than “I got me a maaaan, I don’t need anything else”. But with Bella’s pregnancy and Rosalie’s conversion to Bella fandom, it’s clear that all those life decisions and missed opportunities are meaningless in the face of the White saviour baby. This means that Rosalies dislike of Bella was really about “you haven’t had a baby and are giving up your fertility!” rather than giving up her life and mortality. So an 18 year old’s lost potential and choices basically comes down to fertility; her value and opportunity boils down to having a child. Blessed be the womb.

Of course, Rosalie has all her anti-choice card’s marked with her constant chanting “it’s a baby! Call it a baby!” The one vague bright spot (kind of like a rose on a midden heap) there was Alice resolutely refusing to accede to that and continue to call a foetus a foetus. In some ways, this is presented as Bella’s choice - but it’s all about Bella’s sacrifice; especially when we consider how extreme the situation is. The foetus is breaking Bella’s bones and starving her to death and there is literally no way she can survive giving birth without a desperate attempt to become a vampire, which they’re not even sure will work. Her survival is secondary to the foetus, the loss of her life, even as a near certainty, is considered less important and she is expendable. I think this is even more problematic when we consider how much time Bella spends devaluing herself, how low her self-esteem is, and how Rosalie  reduces all of Bella’s potential down to childbirth. Throughout these books and films, Bella’s existence is defined in relation to other people - she lives to be Edward’s girlfriend (she almost literally stops existing when he leaves) and to be Reneseme’s mother; she herself is unimportant and discardable.


One of the few moments of agency that has been pretty consistent throughout the book is Bella’s desire to engage in sex.  On several occasions, she attempts to seduce Edward but he denies are attempts claiming that he is an old fashioned man, rattling on about long chaperoned walks and asking her fathers permission to marry before possibly stealing a kiss.  Even Bella thinks this is archaic claptrap. On the long awaited honeymoon night after touring through Rio and watching the natives kiss, cause that what hordes of brown people do, kiss madly in the streets like the heathens they are with nary a wedding ring to be seen, unlike the whitesome and delightsome couple, Bella and Edward finally get to have sex. Because Edward is a vampire, Bella emerges slightly bruised the next day, which is of course an extremely modified version of the books, in which Bella’s bruising is far more serious.  Edward being Edward gets pompous and declares sex strictly off limits from here on in. How is it that he is always gets the final say when it comes to sex?  What about her sexual needs?  Note, this isn’t about Edward not wanting sex - this is him deciding to withhold sex for Bella’s “own good”. Bella tells him repeatedly that she is fine, but Edward turns to chess to distract her.  What 18 year old girl would rather play chess than get her groove on. The decision to play chess, once again puts Edward in the role of saving Bella, if only from himself because a man must always be in control of a woman’s body and sexuality.

And we have to comment on Jacob’s imprinting of Renesme. Jacob makes the point that imprinting means the loss of his freedom, and it is something that he does not wish to happen to him.  He literally believes that it makes him a slave to his biology, because the element of choice is solidly removed. In this I would have to agree that he is right.  Unfortunately, as soon as he sees the White savior baby Renesmee, he imprints, thus saving the Cullens from a war with the werewolves.

In what I can only believe was an attempt to make imprinting seem less creepy, the directors show Jacob looking at Renesmee and seeing a vision of her aging from infant to young adulthood.  It is a way to reassure us that Jacob will eventually find love with the adult Renesmee and not the infant in Rosalie's arms.  He will wait until she reaches the age of maturity to consummate his love.  I fully believe that when Meyer wrote this, she envisioned it as a form of love at first sight sort of deal; however, what it really comes down to is men grooming young girls to be their future mates.

This sort of grooming comes down to pedophilia, thus making Jacob a pedophile.  The fact that he supposedly feels love and not lust for Renesmee at this point, does not erase the fact that she is a child who has no understanding of his love or sexual desire, and has no ability to consent.  This makes the act of imprinting on a child extremely predatory.  In Renesmee's case, she physically matures at a faster rate than an average human child.  This means that her actual age could be 4 or 5, while her body presents as that of a young woman.  Meyer did not expand upon this point, but if we follow it through to its natural conclusion, Jacob could potentially have sex with Renesmee when she is as young as 4 or 5, though she would appear to be older.

Jacob tells us that once you imprint, you will do anything or be anything to please the person that you have imprinted on.  The fact that Renesmee is the Whitesome and delightsome child, means that literally from birth, Jacob not only has the opportunity to ingratiate himself into her life, he can train her in a manner that will make her compliant with his wishes.  Bella is the only one who expresses any form of dismay with this situation, but Edward is all to willing to welcome Jacob into his family and call him son.  SON.  What kind of father is accepting of a grown ass man crushing on his infant daughter?

It is further telling that this sort of behaviour is limited to the characters of colour in the series.  The Cullens all have the ability to choose who they will love, and who they will partner with, while the werewolves who are of colour, are reduced to their biology. (read: baser instincts) It serves to make the werewolves appear savage next to the refined and ever so White Cullens.  Not only does the person doing the imprinting experience a loss of agency, it turns them into a sexual predator if the imprintee is underage.  It is important to note that in both cases in which imprinting occurs with a child, the child in question is not just prepubescent, they are an infant.  Renesmee is literally only minutes old when Jacob imprints, thus making her a possession.

Under these circumstances, Renesmee will have no chance to grow to be the person that she was meant to be, because she will always and forever be under Jacob's influence.  Jacob does not want her because she is intelligent or funny, no he wants her for the purposes of breeding.  Given that this imprinting takes place shortly after a drawn out saga where Rosalie continually refers to the fetus as a baby, it tells us that in the Twilightverse, women's true purpose is reproduction -- no matter what sacrifice this reproduction may eventually entail -- as seen by Bella's near death in carrying and birthing Renesmee.

On a less issue-laden critique, I think it was a mistake to split this book up into 2 films as well. Oh, I’m sure it makes great sense moneywise to extract the most cash from the franchise and the way the book is written lends itself very much to it being two separate films: but storywise I think it’s a problem. In the book, we have the marriage, honeymoon, birth of Renesme but that’s, in many ways, an introduction to the major part of the plot involving the Volturi. By ending before that plot I feel like it was one long film in which not a whole lot happened - we had the interminably long wedding, we had the interminably long chess tournament - sorry, honeymoon - and then we had the relatively brief action and angst of Bella’s anti-choice advert with a little werewolf drama for seasoning. It takes us an hour to reach Bella at the Cullens and everyone being dramatic over her pregnancy which in turn is another 30 minutes of angst laden conversation with odd cut scenes to the werewolves.

I think it goes without saying that we wouldn’t recommend this book. Fraught with tropes, a virtual PSA for the anti-choice movement, seasoned with racism and then finished off with a dollop of paedophilia - all to a background of no real plot. It wasn’t fun.