Review of Symphony of Blood, A Hank Mondale Supernatural Case by Adam Pepper 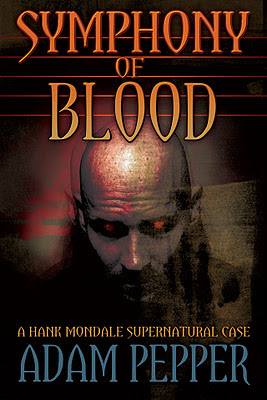 An e copy of this book was received from the author via Goodreads.
Okay, the best thing that I can say about this book, is that it is only 162 pages long.  I was grateful when I got to the end.
The protagonist is Hank Mondale and is a private investigator, with a huge gambling addiction and a small liquor problem.  Sounds familiar doesn't it?  There is nothing original about this character, and he is not in the least bit likeable.  He is constantly short of money and attempts to gamble his way out of his debt, and of course incurs even more debt. He desperately wanted to be cop, but could not become one because of past legal issues.  I know that the reader is meant to be sympathize with Hank, but a drunk gambler, who cannot keep his shit together is not appealing. Hanks problems were of his own making.  As a straight, cisgendered, able bodied White man, he should have had the world at his beck and call, whereas; the servile people of colour in this story were up against systemic inequalities. Even in the end, when legal issues should have been an issue for Hank, he was given a pass. The police had no regard for a dead prostitute, but a White man who can barely stay sober received tons of concern.
When Hank is contacted by Blake, a business tycoon to deal with an entity that is stalking his privileged daughter Mackenzie, Hank sees this as a dream come true.  With the promise of money, he begins investigating.  There are several murders and slowly we learn that these deaths are all connected.
When Hank learns that all of the deaths are due to a monster, he naturally disbelieves what he is being told. It is only after seeing the creature for himself, that he realizes that the Blakes were telling the truth.  What he does not realizes is that though the Blakes are on the run from the creature, that they are equally culpable for the deaths themselves.
Suddenly we have a shift in the story, and the point of view switches to that of the monster.  The problem with this is that we then spend a good chunk of time reviewing what we have already learned.  The monster tells us about the people that it killed; however, it all felt like filler because we already know that it killed these people.  I suppose this was an attempt to explain the monsters motivation and once create sympathy, but the shift erased the little momentum that the story had.
The end of the book comes with no real resolution, and a clear set up for another book, to which I must say, thanks but no thanks.  The characters and plot were predictable.  The misunderstood monster has been done again and again, and to make matters worse, Pepper did not add anything to even remotely twist this concept, or make it in the least bit fresh.  I will however say the descriptions of the monster feeding were suitably stomach turning and vivid.
I think that Pepper was attempting to do edgy dark humour, encased in a private investigator story, but Symphony of Blood missed the mark repeatedly.  All I saw was bickering between Mackenzie and Hank, which seemed trite, when one considers that their lives were at stake. We never learned the origins of the monster and there seemed to be a lot of borrowing from Godzilla, except that we didn't have fall out as a cause.  Instead of spending so much time going over that which we already knew, Pepper would have been better off giving us a true origin story to build the mythos of his monster.
There were no GLBT characters in this story.  It seems that despite the diversity of NYC, NYC people, that only straight people exist.  The characters of colour were in servile positions, that is when they were not being eaten.  They only appear in the story when they can help the White characters out.  Many of the victims were marginalized in someway, but perhaps the most disgusting was the death of sex worker.  Her death fed into the idea that these women are just disposable fodder.  She was reviled and then ended up just another decomposing corpse. In a world in which these women are often raped and murdered, I found this portrayal particularly troubling, because it feeds into the social idea that these women are subhuman.  I think it would be fair to say that Pepper invested more time into humanizing the monster than any of the marginalized characters that appeared in the book.
It took me far longer that it should have to read this novel, considering that it was so short. I can only say that I was bored beyond belief.