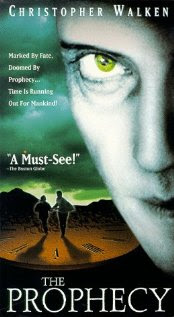 Did you ever notice in the Bible how whenever God wanted to punish someone, or make an example, or whenever God needed a killing, he sent an angel? Did you ever wonder what a creature like that must be like? Your whole existence praising your God, but with one wing dipped in blood.  Would you ever really want to see an angel?

The Prophecy was released in 1995 and stars Christopher Walken, Elias Koteas and Virginia Madsen. We are all aware of the original war in heaven where the angels rebelled, and God cast Lucifer our leaving him to rule over heaven.  The Prophecy posits that this was not the last war in heaven.  It suggests that another war has been raging for centuries, because the angels are jealous that God has elevated man over them by bestowing a soul upon humanity.
The movie begins with Thomas Dagget standing in line to take his priesthood vows.  As he lowers his body to the ground to ask for the strength and forgiveness of God, he is overwhelmed with a vision of angels covered in blood, screaming in pain, in the midst of a battle.  We learn that unlike many, Thomas has lost his faith because heaven showed him to much.  Years later he has become a cop.
The war is at a stalemate and the archangel Gabriel is searching for the soul of a man who was a general in life, guilty of heinous war crimes in Korea.  In this search he is willing to stop at nothing.  Being an archangel is impossible to kill and possess superhuman strength.  This makes him a formidable opponent.
Before Gabriel can possess the soul of Colonel Hawthorne, it is removed and placed into a young Native American girl named Sophia.  All that stands between Sophia and Gabriel is Thomas Dagget and her teacher Katherine.  To protect her they must even face Lucifer himself played by Viggo Mortensen.
If I had only one word to describe this movie, I would have to say it would be didactic. The over riding message in this film is that the natural state of man is to not only accept, but to embrace a Christian God.  In one scene, Gabriel has children blow a trumpet.  The choice of the instrument was no accident as Gabriel is often portrayed as the one who blows the trumpet, signalling the last judgement or the end of days.  Upon defeating Gabriel and casting out Lucifer, Thomas says:

In the end I think it must be about faith and faith is a choice, then it can be lost, for a man, an angel, or the devil himself.  And if faith means never completely understanding Gods plan, then maybe just understanding just a part of it, our part is what it is to have a soul, and maybe in the end that's what being human is after all.

I found this line very interesting, because Thomas said this after the Native American people had cast the evil spirit out of Sophia, and he was surrounded by Indigenous people, who clearly did not have the same belief pattern. For Thomas being human is not only about having faith, but accepting a Catholic interpretation of faith.  Those who did not share his belief system were clearly additives.  While there are indigenous people who are practicing Catholics, I think that it is important to note that Catholicism as an institution has been extremely damaging to Indigenous people throughout North America. Placing Indigenous people as additives in this story only furthers the ongoing colonization of their faith and their culture.

It really seemed as though Indigenous characters were chosen specifically to perform the woo woo in this movie and to be lead by the ever so White and Catholic Thomas.  It was Thomas who figured out what Gabriel wanted and why and though Lucifer approached Katherine first, it was clear that the soul he really wanted belonged to Thomas, because it was Thomas he chose to threaten in the end.


The premise of an ongoing war in heaven was interesting but the heavy handed nature in which the necessity to believe was pushed subtracted from the movie over all. It was left for Christopher Walken, as the archangel Gabriel to add some much needed levity.  I was amused by the fact that he had no problem ripping the heart our of a little girl, but was highly offended by someone taking the lords name in vain.  Viggo also played a very creepy Lucifer, though I find it ironic that he appeared very similar to the western construction of what Jesus looks like, with his brown hair, and beard.  As great as these performances were I don't think that they were enough to distract from the didactic approach this movie took to storytelling.