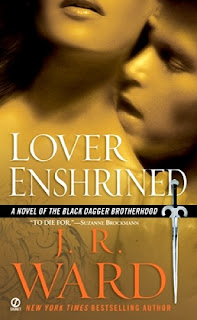 The plot for this book is actually surprisingly involved for the Black Dagger Brotherhood. While we do have a relationship between His Whineyness Phury and Cormia front and centre but it's relatively easy to ignore and you can see the true action beneath.

The Omega has decided to combat the Dhestroyer prophecy with both a new fore-lesser and to tap his son – the son of a powerful vampire aristocrat. Bringing him back into the fold not only brings a powerful warrior with terrifying abilities but also bringing with him powerful intelligence that allows the lessers to hit a lot of extremely high profile targets which in turn leads to the looming shadow of politics in the glymeria

John Matthew's story develops a lot with his relationship and the relationships between him, Baylock and Quinn growing. The trio are more firmly ensconced in the Black Dagger Brotherhood and I think these 3 are the most engaging characters in the series

Rehvenge has to continue to negotiate his half-sympath side, and the things he has to endure to keep it hidden. And to cap it all we have Lassiter, a fallen angel, coming to the Brotherhood with something they had lost

I suppose I should address the protagonists and get them out of the way. Phury, Lord of Angst is sad and tortured because – actually I still have no idea. But my gods can this man mope and he has made an epic artform out of self-pity. It really stands out more because Wrath, Vishous, Zsadist and Butch all seem to have had waaaay more awful lives than Phury. His main problem seems to be an internal voice he hears (which sounds British and looks like a Ringwraith and is called the Wizard. And waltzes to Puccini. Yeah I'm not even going to try and make sense of that, my brain just took one look said “nope, not wasting a single grey cell on that one” and stalked off in a huff) that tells him what a screw up he is.

I'm not saying he hasn't had a difficult life – but his levels of self-pity and self-destructiveness are horrendous and glaring, especially next to the brothers who have had much harsher experiences and still manage to keep going. I cringed when I read him chewing out Zsadist for not being grateful enough when he waved his sacrifices like a martyrdom flag. It makes him really unlikeable.

And his relationship with Cormia. Oh gods, this is perhaps the worst relationship yet. The endless “you don't want me, no s/he can't possibly want me” with rejection and hurt fee-fees when they just need to freaking TALK to each other and get it on already (honestly, they're still playing this game after they make out).

With Phury's epic whining and his relationship with Cormia being the most ridiculous yet (never has there been so much fake conflict crammed into a love story) this book would be the worst I've read so far in the series. But, thankfully, we have a lot of side-plots that are actually *gasp* interesting and good stories.

And the lessers are actually threatening and menacing again – the ascendancy of the Omega's son is pushing some real plot development in that area promising more epic conflict and a focus on the action and war that has been lacking for a while. We got to see more of the lessers and of the new fore-lesser and at last the war is moving closer to centre stage.

In fact, one complaint I do have about these good sidestories is that they are so much bigger and more involved than the romance that the book feels slightly incoherent – with Rehvenge's story and John's story, Lassiter's story and the lessers with the Omega's son – and then Phury's romance and all of them are very distinctly separate threads. The book feels almost like a soap because we have so many stories running parallel to each other. Still, since these side-plots are infinitely more interesting than the dominant storyline, I'm not going to complain

Social justice-wise – the dudebro language is the same, alas. And Cormia is another woman who is a delicate little fainting flower, alas. The glymeria (ruling council of the vampires) already revealed to be misogynist and generally screwed up to an epic degree, is also disableist. Any “imperfections” are shunned and disowned to such a huge degree that even Quinn's different coloured eyes are grounds to disown him and consider him a shame to the family – naturally with actual disabilkities this is only more severe. However, this is redeemed in that all the principle characters fiercely denounce the glymeria as vile – and we have 3 strong disabled characters: Wrath, the king, is severely visually impaired, John was born without a voice box and communicates with ASL and Phury is missing his lower leg and uses a prosthetic. 4 if we include Rehvenge and his half-sympath abilities. I may actually go so far as to say this is one thing the series does well.

Now for some language mocking. First prize in the new language department is “leahdyre”. It's been around before and I dismissed it. I hadn't realised at first but when you say it aloud, it's clear this word was, before it was so brutally mutilated, “leader” (which is, of course, what it means as well). I have a desperate urge to gather the word in my arms and sooth it whispering “what did they do to you?!” in shocked tones while it cries piteously in anguish

And on names? We have Hharm. First Hhurt then Hharm. She's not even trying to make these names pronounceable any more.

I'm torn in many ways how to rate this book. I actually enjoyed and liked the side-plots, I really did. But the main storyline was so painful that I had to force myself to keep reading. I'll be honest, every time Phury came back on the page it was an effort of will not to DNF this book. But the side-plots are actually worth a positive review in and of themselves. In many ways, they pulled this book up – but the main plot already put it so low that there's a limit to how good side-plots can make it. In some ways it saddens me, because the quality of these side-plots tells me JR Ward can write a damn good story - if we could leave the convoluted Dudebro "romances" alone