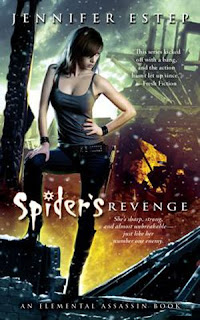 The plot was simple yet epic. It wasn't complicated with nuances and twists and there's not a lot to summarise of it without going outright into spoilers. Gin has reached the final showdown. Her or Mab. Mab has been targetting her sister too often and while Gin can hide her identity and be the ghost biting at Mab's flanks, Bria cannot. And the longer this fight continues, the longer Gin keeps to the shadows and plays the long game against Mab, the more and more danger Bria is in.

Especially now. Mab has put her vast resources on the table and sent out a call to every bounty hunter in the country. The Spider – dead or alive. Or Bria, Gin's baby sister, alive only. Except, with some of these bounty hunters, “alive” covers a great deal – and Mab herself certainly never hesitates at torture.

And this book is the showdown. Gin avoiding the bounty hunters and aiming to kill Mab, by magic or blade, even though Mab I the most powerful elemental there's been for 500 years. One way or another, she has to die and the people Gin loves have to be kept safe.

It is a direct plot. There are no side-plots, there are no real twists, no shades. This is an epic confrontation, the end game – side plots would be a distraction at this point and twists wouldn't make sense when we consider the careful planning of the Spider. Neither would fit this story and I'm glad they're not there. This is about one thing – Mab vs Gin and it isn't distracted from that.

I find myself in a difficult position with this book review. I have so little to write. The problem with not having a lot to write is that people assume the book isn't very good. Generally I find it's quite the opposite. With a bad book with multiple fails, social justice headaches, bad writing and awful spelling, there's always something to write – and snark – about. A bad book is, in many ways, a gift to review, because it's so much easier.

But a good book, with a simple direct plot, with strong, believable characters and nail biting tension and blood fizzing excitement? Without spoiling it, what do you say except a page full of praise?

Well here it is. The story is epic. It's the showdown we've been waiting for and it does do it justice. There is the tension, the fighting, the action, the fear, the risk – it's done very well and I can't fault it for a second

The relationships are tense. Her friends and family are close to her, any reservations they used to have are pushed aside and all of the relationships grow stronger and firmer in the face of this opposition and threat. Doubts and reticence fall back under such situations – and its not a miracle change of heart, it's a very natural response to the situation. Again, I find nothing to fault. I still think Owen is a little hollow, but then this isn't his story and the focus isn't upon him.

I still want to see more of Roslyn and Xavier. I appreciated the background on Sophia, it has been a long time coming, and I think it will probably be plot hooks for future novels. And, yes, it would be nice if there were some GBLT characters, but, to be honest, when you get to book 5 and there's still no inclusion, any inclusion after that tends to feel tokenistic, trying to rectify a mistake – painting over the cracked plaster as it were.

I am curious as to where the story will go from here. Now the epic is happened I actually thought the series would close – but apparently not. I'm a little concerned that Gin will become a full on Robin Hood. She's always had a personal agenda in bringing Mab down. If she literally becomes a blade for everyone with a sob story I want to see how this will be done while still preserving her separate agency and life – it could be done, certainly, but I would like to see how it will be done.

All in all? The epic is there, the story is there, the characters are there, the relationships are there, the world is there. It's all there and it's all good – and it was a very satisfying, epic conclusion to an amazing series – and I'm intrigued to see where the series go after what felt so much like an “ending” moment