AN OPEN LETTER TO ALEXANDER SKARSGÅRD

Okay, I found the following letter on tumblr and it cracked me up and so I am sharing with you.  If anyone knows who the author is please leave it in the comment section, as I would love to give them credit for their work. 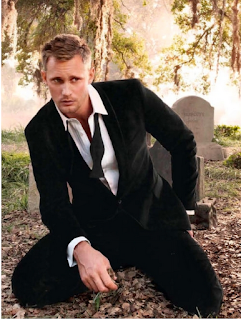 Dear Alexander Skarsgård,
Stay away from my wife.
I’ve put a lot of time and effort into this relationship and I’m not about to let you swoop in with your slicked back blonde hair, black leather jacket, and impossibly good looks and steal my wife.  I refuse to let you waltz into my home (after being invited in) and use your trendy vampire skills to take a bloody bite out of the sanctity of my marriage. You don’t fool me for one second Mr. Skarsgård — I know you’re not really a vampire. My wife on the other hand, she appears to be too busy swooning to know the difference.
Until this horrible vampire fad passes and she snaps out of it, stay the hell away from my wife.
I know she loves me, but clearly your influence is something beyond her conscious control. On Sunday night as I sit dutifully by her side on the couch during True Blood, I can’t help but notice how she looks at the TV. She stares beyond the plasma screen hoping that if she concentrates hard enough she’ll be transported right into the broadly drawn stereotype that is Bon Temps, Louisiana.
Do you know how tough it is to watch the future mother of my children sexually mesmerized like that? Of course you don’t — you just glamour any woman you want with your vampire stud powers and drag her down to your underground sex chamber.
This vampire bullshit does not follow the rules of engagement. Let’s just pretend that my wife is garlic encased in sterling silver outside at noon on a hot summer day.
Why couldn’t we just battle this out on a level playing field? East Coast software guy with social anxiety versus Swedish actor once nominated for a Guldbagge Award. That’s a battle I feel like I can win. But instead you’ve got to stack the deck and make sure that every couple of episodes contain a completely unnecessary extended shot of your naked ass. It’s essentially another vampire spell, just with more sweaty glistening ass. You’ve also cameoed in both the movie Zoolander and Lady Gaga’s Paparazzi video. If that doesn’t completely corner the tastes of the world’s women (and I suppose gay men as well), I don’t know what does. Don’t try so hard Skarsgård, it’s kind of pathetic.
Would you prefer to hear it in your native tongue? Stanna borta från min hustru.
The vampire killer in me has been awakened and I won’t rest until my wife notices my own sexual inadequacies during our occasional lovemaking sessions rather than envisioning a pale Swedish vampire on my also pale, but otherwise completely different frame. I’ve read ahead in the Sookie Stackhouse books and the good guys win.
In conclusion: Stay away from my wife.
Sincerely,
Brian
Posted by Renee at 4:00 PM