Every Wednesday, we will bringing you an urban fantasy reboot and this involves taking a critical look at movies from the genre across the decades. This week, we will have a look at the 1998 movie staring James Woods, Daniel Baldwin and Sheryl Lee: Vampires. 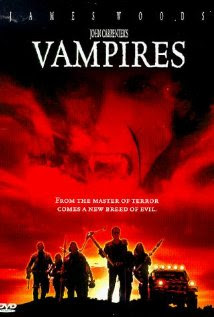 This movie could easily go down as one of the worst films, I have ever had the misfortune to see.  For the purposes of full disclosure, I am going to admit right off the hop that James Woods is one of my least favorite actors of all time.  From the beginning, I could see why he was attracted to this role.  He got to play an ass kicking vampire slayer with a gun and a cross bow.

The basic premise of the movie is that a group of vampire hunters assembled by the Vatican roams around the states clearing out nests of vampires.  James Crow played by James Woods, was actually raised to be a vampire hunter after he killed his parents because they were bitten. In the first nest that Crow and his crew attempt to clear out the miss the master vampire but manage to get all those whom he sired.  This of course is cause for celebration and that means getting a hotel room, getting drunk, playing loud music and using the services of sex workers.  Crow is approached by Katrina played by Sheryl Lee for some one on one time and he hands her his key to wait for him.  While she is waiting, Jan Valek the master that he missed in the raid comes looking for his revenge. Valek bites Katrina on her thigh in a position that looks like he is going down on her and the proceeds to kill all of Crow's crew including their in house priest Father Giovanni.


As you may well guess, the rest of the movie is spent hunting down Valek.  It turns out that Valek is a 600 year old former priest turned vampire. He was originally thought possessed and so the church performed an obscure exorcism which inadvertently turned him into a vampire - the first vampire to walk the face of the earth.

In hateful little spiel, Crow has this to say about vampires, "Well first of all, they're not romantic. It's not like they're a bunch of fucking f@gs hopping around in rented formal wear and seducing everybody in sight with cheesy Euro trash accents. Alright, forget whatever you've seen in the movies. They don't turn into bats, crosses don't work. they don't sleep in a coffin lined with taffeta. If you wanna kill one, you drive a wooden steak right through his fucking heart and sunlight turns them into crispy critters".

The aforementioned line would be enough for me to hate this movie but alas, Vampires adds misogyny to the mix. Because Katrina was bitten by Valek she has a psychic link with him and so Crow and his sidekick Anthony Montoya played by Daniel Baldwin spend a good part of the movie abusing her.  When they are not dragging her around, stripping her naked and tying her up, they refer to her as a dumb whore, stupid bitch, broad etc., - I'm sure you get the message. In one scene, Katrina attempts to kill herself to avoid becoming a vampire and in the process she bites Anthony. There are many ways in which Anthony could have responded but he chose to punch her square in the face.  When we think about the violence routinely aimed at sex workers this was absolutely inexcusable.

Even though he has punched her in the face and called her everything but a child of God, Anthony suddenly develops feelings for Katrina. Suddenly he is lovey dovey and calling her honey.  Of course now that he is bitten, and is going to turn into a vampire, they are in the same boat. So it takes a vampire bite for him to let go of his male privilege long enough to stop attacking her - lovely.

If you like blood and gore, along with gratuitous violence, then this is the movie for you.  Vampires rip hearts right out of bodies, cut throats and seem to have a hole in their lip, because they are incapable of swallowing blood without it dripping down their faces.  Even though Crow makes a big point of telling us that guns will not harm a vampire, he constantly has one in hand.  If guns don't do anything, why are they running around with handguns and automatic weapons? Oh I know, men need guns to be manly action stars, even if it makes no sense in the story.

I really cannot think of a single redeeming characteristic to this movie.  It was vomit inducing to watch Katrina being treated as a useless tool.  It was boring to watch a testosterone fest that was more interested in gore than story. If you feel like torturing yourself, this movie can be found on Netflix.

In honour of the Breaking Dawn, opening on Nov 18, the next three Wednesday's we will be discussing the Twilight films.